The first of the elegant new power line pylons have been installed, following British construction and testing in Europe 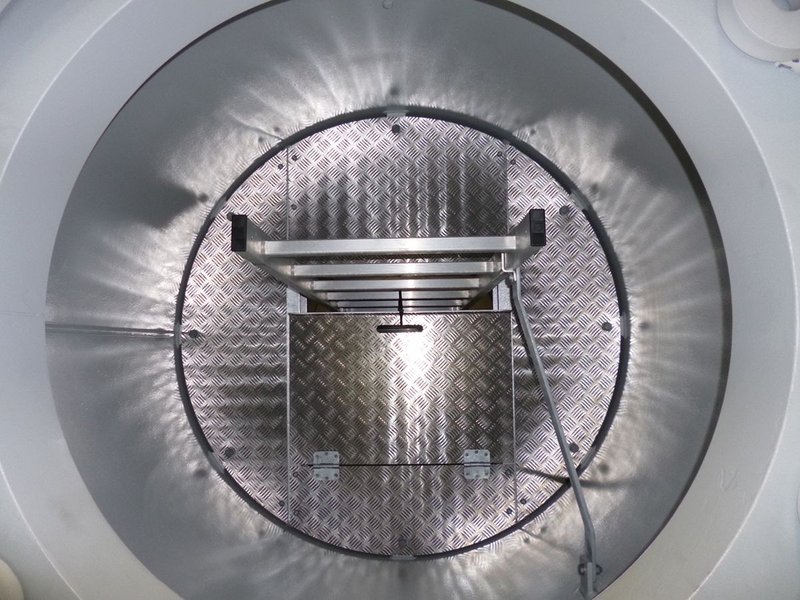 Looking up through the T-pylon, small steel access ladders runnning through to the top.

It’s full steam ahead for Bystrup Arkitekter’s T-pylon. Won in an RIBA competition in 2011, the first 35m high, 43 tonne steel pylons have been erected at the National Grid’s training academy at Eakring in Nottinghamshire. Fabricator Mabey Bridge constructed the pylons at its steel manufacturing plant in Chepstow.
Mabey Bridge T-pylon project manager, Andy Hosking, says the firm is fabricating all five types – 3 ‘T’ pylons, a gantry and a terminating pylon – using experience gained in manufacturing large tubular steel structures, including wind turbines. The five types are: the standard suspension pylon, designed for straight runs; the F-10 flying angle pylon to carry deviations of up to 10°; the D-30 pylon, for up to 30° deviation, and the gantry and ‘double diamond’ – terminal pylons for use at substations or to help transition to cables underground. The T-pylon is basically a monopole steel structure of three tubular sections, each fabricated from rolled ‘cans’, whose diameter goes from 2m at its base to 1m at the top. Cast bearing components allow the ‘T’ arms to extend from the body of this pylon. The 12-40mm thick steel plates are cleaned before being passed through a cutting and profiling machine. Cut edges are cleaned up and the plates passed through a heavy duty ‘DAVI’ machine which, after a few minutes under extreme loads, rolls the plate into a cylindrical can form, welded down the seam and to the adjacent ‘can’ to form a large tube before being shot blasted and painted. Internal flanges at the can ends allow the 10-12m sections to be invisibly bolted together on site. The robust 13m by 8m upper frame of the ‘double diamond’ terminal pylon ranges from 600mm to nearly 1m in diameter and is formed of 15mm thick steel plate. Meanwhile, on the standard suspension pylon, insulator assemblies weighing 2.5 tonnes hang like earrings either side of the monopole. The F10 – with beefier insulators tied back with an additional support to the mast, and designed to allow power lines to continue around up to 10° angles without conductor termination – has an insulator assembly weighing 12 tonnes. Before being installed, the pylons were sent to Seville in Spain, where they underwent full mechanical testing with the electrical components tested at a high voltage laboratory in Sweden.

Less height, more slight, even out of sight
First introduced in 1928, there are now more than 88,000 steel lattice electricity pylons in the UK so the new T-pylon will have a significant effect on the landscape. At 15m lower than the current pylon, the new monopole is not only less obtrusive, it has been designed so that cables can be routed by following the contours of the land with sweeping curves rather than the lattice pylons’ sudden changes of direction. The lower height is possible because of the new ways the cables are held in place. Instead of being attached to three arms each side, a diamond arrangement carries cables on one in a much smaller space. T-pylons are part of the planning consultation for the new Hinkley Point C nuclear plant in Somerset and the bigger strategy of upgrading the nation’s electricity infrastructure. In areas of particular environmental sensitivity, cables are planned to run underground. Costing £16m/km more to construct, it’s proposed to bury some of the Hinkley Point route under the Mendip Hills. 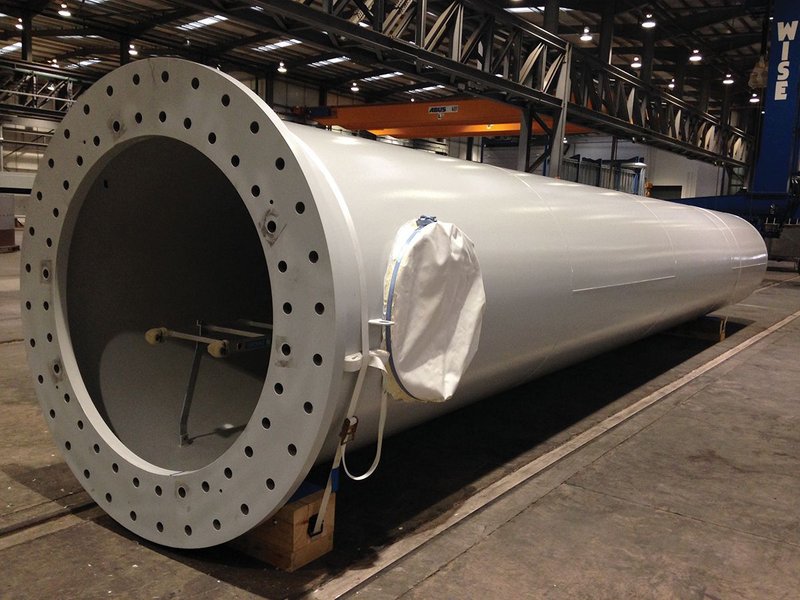 A 10m ‘can’ of the T-pylon showing the invisible bolted connection flanges.

T-pylon and its power runs

• 400kV power lines.
• T-pylon: more compact, with conductor bundles closer together, producing lower magnetic fields
• Capable of carrying larger conductors
• Carries two circuits either side of the pylon body, as do current lattice pylons
• Typically run at 500A/circuit. The T-pylons at Hinkley Point may run at up to 1000-1300A/ circuit.