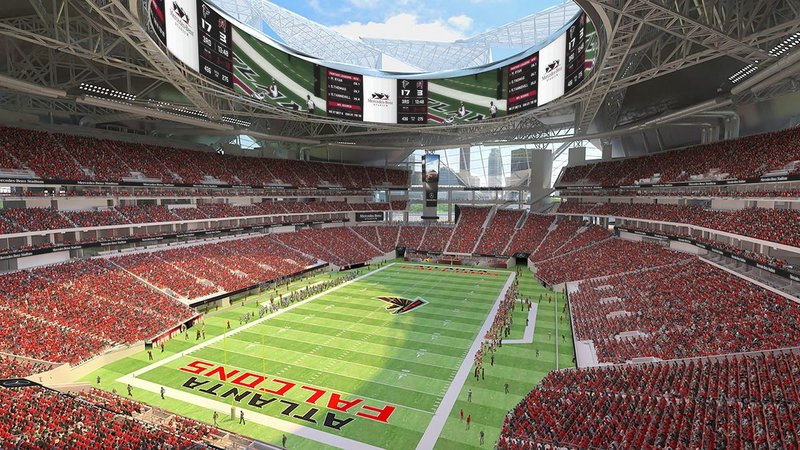 A former architecture professor of mine once claimed to have secretly scaled Rome’s ancient Pantheon at night to abseil through its oculus and take a torch-lit walk through the interior.

Even greater derring-do would be required to penetrate the dramatic retractable roof that caps the US$1.2 billion Mercedes Benz Stadium in Atlanta, which features eight moving cantilevered ‘petals’ that fan out like an aperture on a camera.

BuroHappold Engineering worked closely with architect HOK to develop the concept for the retractable roof, which is able to fully open in less than 10 minutes and incorporates a lightweight structure of inflated ETFE cushions to reduce loads on the cantilevered petal sections.

This feat of engineering will create a spectacle akin to emperor Hadrian’s ancient temple, in its day, says Roger Nickells, CEO of BuroHappold Engineering: ‘The atmosphere will be quite unlike anything else seen before, the retractable roof will become a part of the crowd’s experience. You can just sense what it is going to feel like when all 80,000 people are in there cheering.’

When the petals slide open, the oval-shaped roof opening will span the length of the field past each end zone. Designing the structure to resist static and dynamic forces was a delicate balancing act. The roof is hung from four trusses that span between four ‘mega-columns’, and the central ring is encircled by a 360° scoreboard screen that conceals key structural supports for the retractable elements above. Each of the petals will run on motorised bogies, similar to those used on trains, that propel them along rails. The system gradually accelerates and decelerates to avoid excessive dynamic forces on the structure.

‘The movable roof components introduce dynamic forces creating the possibility of deflection,’ says Nickells. ‘The structure had to be rigid, but not too rigid, or the size of the sections would become too great. Our design had to consider wind forces; when open the roof is like a bottle without a lid, increasing the possibility of resonant noise; then there is the wind impact on the individual petals in their open condition.’ A key concern was ensuring that the structure’s journey from the roof to the ground is not so oppressive that it prevents spectators from having views across the stadium bowl or out of the building.

The Mercedes Benz Stadium is targeting LEED Platinum certification and the highest levels of sustainability, and the power required to drive the roof will not have a detrimental impact on overall performance, says Nickells: ‘Energy goes into overcoming inertia and starting and stopping the movement; once in motion energy use is not significant.’ The roof aperture is one of several innovations, including  a pioneering single skin ETFE on the eastern facade of the stadium intended to create a ‘window to the city’, with views to downtown Atlanta.

‘Across our stock of stadia this has been one of the most fascinating to work on,’ says Nickells. ‘Making it buildable required the combined intellect of all our professional team, and client, constructor and contractor teams. The fascination of dealing with the complexity of this roof has been how we all worked as an integrated team to make it a reality.’