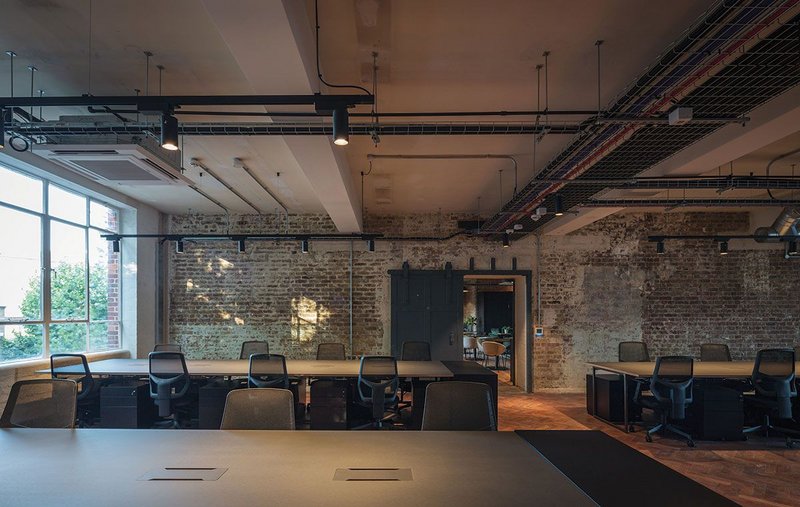 Walking through The Ministry in Southwark is a pleasantly confusing experience. Billed as the first social workspace and private members club for creative industries, the project is housed in the former Letts diary 1860s printworks. But the lavish 4,729m2 refurbishment is easily overlooked. That’s because client, mega-club Ministry of Sound, landlord, Lord Palumbo, and architect, Squire and Partners, conspired to leave as much as possible of the original interior intact. They call it ‘premium raw’.

‘But there was a difference between raw and dirty and shabby,’ observes Squire’s interior designer, James Halliday.

The original sliding metal doors were simply cleaned and the brick walls carefully treated. Wooden floorboards were denailed and stair cores left the very rawest; the terrazzo of the balustrades stripped of paint and the walls just filled and sanded. Doors leading in show the palimpsest of paint jobs over the decades.

Restoring the space in a way even Ruskin might have approved of was more work than simply plastering and painting over, adds associate Cat Farrell. Decorators would paint a wall when their backs were turned, so the team had to post notices saying ‘this is finished!’

But it’s only the palette that’s raw, of course. None of the 850 tenant workers, whether in large wings or smaller partitioned offices, will sit on tea chests at trestle tables. The multi-floor workspaces are dotted with ergonomic chairs set at sprawling desks. Communal workspace areas feature gorgeous bespoke rugs, velvet sofas of bottle green and topaz and luxuriant plants. These are set next to veneered tables set with 60s-style chairs. The cognitive dissonance is most extreme when, from a shabby corridor straight out of a shared Berlin creative studio, you catch a glimpse of high-end bathroom ceramics.

Where interventions have been made, they are simple and sober: subdivided company offices and meeting spaces have almost Japanese-style glazed partition walling divided into four by battens, clear at the top with Georgian wired glass at the bottom. Services to the desks are carried in scaffolding poles which give the appearance of being a structural element.

Some of us have more fun at work than others, and The Ministry’s music industry tenants, Skrillex and deadmau5 among them, will certainly appreciate the foam-lined listening booths, virtual reality studio and private cinema in the basement.

But The Ministry isn’t all about work, work, work. There is a club on the ground floor, with a long poured-concrete-topped bar faced with bronzed scaffolding poles. On the walls is art work from the House of Fine Art, including a vast, black, highly textured oil painting, yours for £6,000.

If club members need to do deals, they can encircle themselves with a velvet curtain. There are a couple of external spaces, including a sunken barbecue terrace peppered with black and white polka dot glazed ceramic stools the shape of champagne corks. Private dining spaces combine opulence with intimacy.

Fun has its place among all the good taste. The team has provided a bank of hair styling stations in the loos where members can waft their locks beneath traditional Polish pająki chandeliers before swinging – and Instagramming – themselves in a suspended chair of Tutti Frutti hues.

The total effect of The Ministry of Sound’s new venture is suitably banging.