Asymmetry was the theme of the winning entry 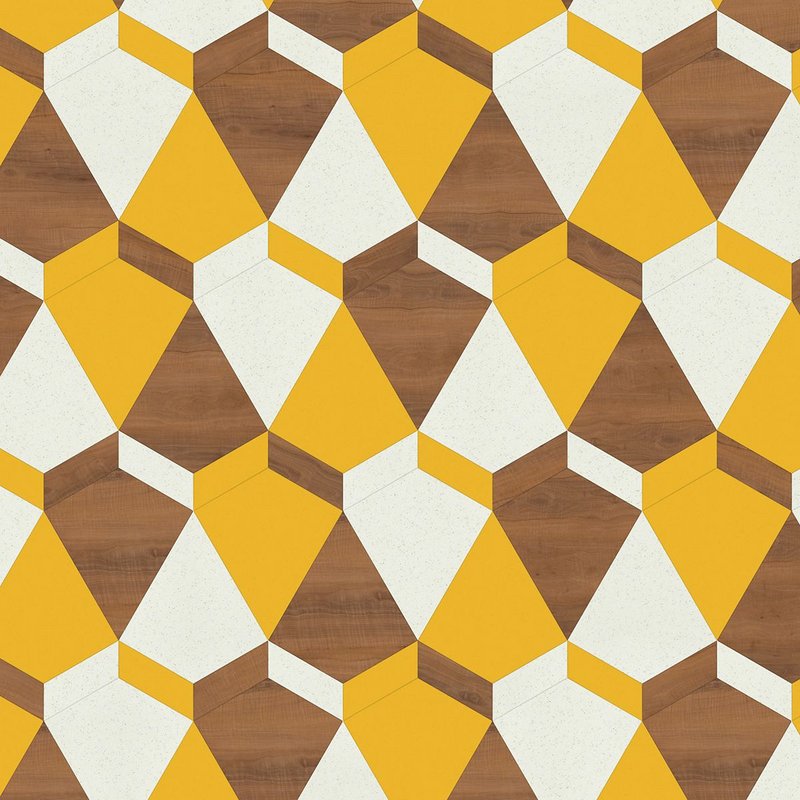 Tongan pattern, chosen as the overall winner by the judges. The design uses a Kite laying pattern with Ashdown Plum, Napoli and Glint Orb products

Asymmetry was the theme of the winning entry by WHAT_Architecture, which boldly created an evolving, non-repetitive design using a consistent laying pattern divided into different colourways. Conceived as a pattern map of 10,440 tiles covering a 20m x 20m area, this speculative proposal allows the customer to select the portion of the design most appropriate for the room they require the flooring for. Although this concept stretched the brief by creating a macro-scale repeating pattern rather than one on a room scale, the practice’s final entry put three areas of the design into a repeat pattern, and these are the designs that will go into production.

The concept allows the flooring pattern to transform as it flows through the space of the house, says WHAT_Architecture director Anthony Hoete, allowing the client to choose sparser or more densely populated areas of the pattern as required, along with one of the colourway zones. In this way, the pattern appears asymmetric, despite the underlying symmetry of the larger source map.

‘This converts personal space into a chromatic sequence,’ he says.

At the same time, he adds, this approach suits the practice’s natural aesthetic tendencies for the asymmetric which it feels is more relevant to the contemporary condition. After all, he points out, most domestic rooms are themselves asymmetric due to the projections of fireplaces, doors or windows.

As part of its development of the concept, the team explored symmetry and asymmetry with the help of studio ‘barkitect’ Chiba who was also on hand at the final event. Facial images of Chiba and assistant architects Anna Scibior and Sarka Gulasiova were digitally manipulated to give a comparison between natural asymmetry and artificial symmetry.

‘We want to enhance quirkiness and individuality,’ says Scibior, adding that the team view asymmetry as a positive.

The practice then came up with a narrative of notional clients Mr and Mrs Barclay, who they imagined as dreaming of escaping on holiday to a Polynesian island, and created an extensive design to show the graduation of the pattern. The South Pacific theme supplied the entry’s colour scheme of white, yellow, wood and black, but, says Hoete, the design could equally have incorporated a completely different colourway – such as a floral palette inspired by the Chelsea Flower Show, or even a sky blue-led design for a Manchester City fan.

‘We’re not fixated on the idea that everyone has to love Polynesia,’ he says.

The final WHAT_Architecture designs included the judges’ favourite, Tongan, which uses the Kite laying pattern and two versions of the Arrow laying pattern.

While Amtico’s visualising technology is geared towards repetitive patterns, WHAT_Architecture used the competition to explore ways that the customer might be able to navigate over a macro rather than room-scale pattern map to make its selection.

‘If we did exactly what Amtico asked for they could probably have predicted the outcome,’ says Hoete, explaining the practice’s unorthodox approach to the challenge.

‘We didn’t want to reinvent the wheel – they already had a great product. We tried to explore the product through existing production techniques. We’re not changing the colours of the tiles or the shapes.’

WHAT_Architecture thinks the idea has great potential for residential and commercial applications, such as restaurants and cafés.

‘Customisation and taking ownership of the design is very powerful. We think it would be great to find a way to bring it to market,’ concludes Hoete.

Return to the home page