Africa’s first museum of the continent’s contemporary art is a dramatic sculpture in itself, hewn from a concrete silo in a huge, bold technical feat 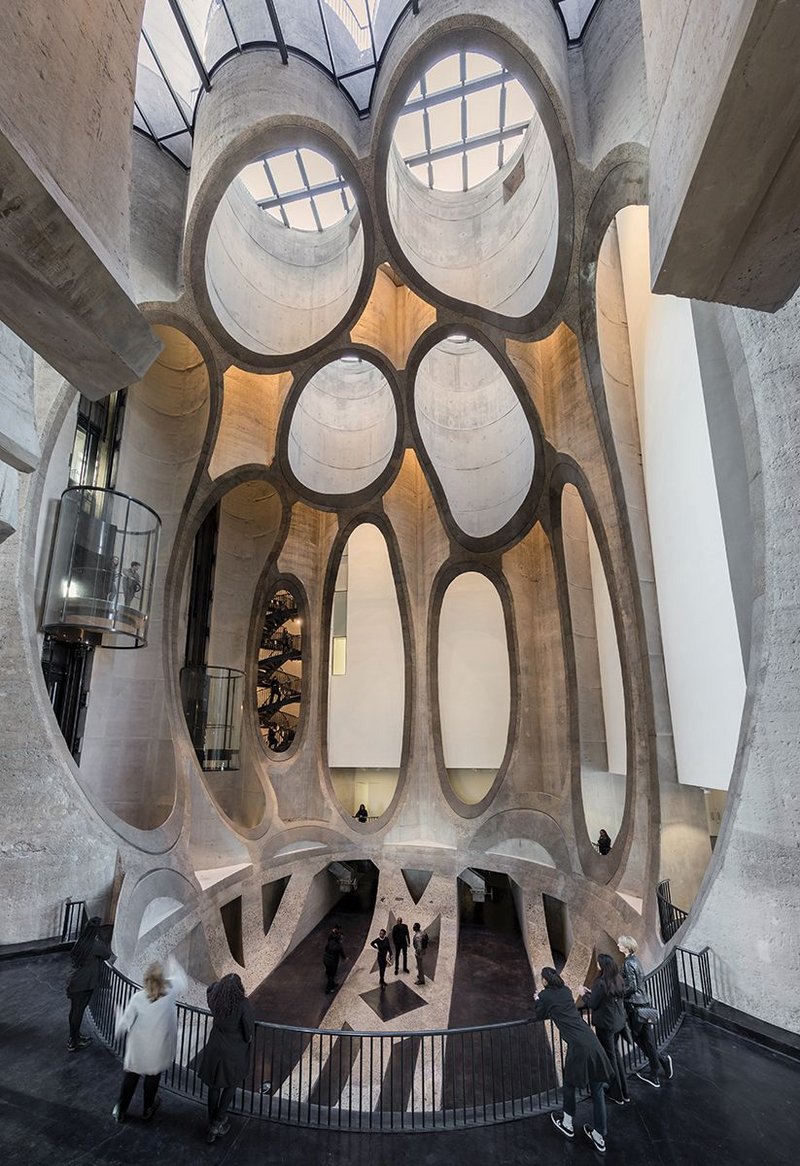 Cape Town’s Zeitz Museum of Contemporary Art Africa is as remarkable for what it isn’t as for what it is. It is a 9,500m2 gallery created in a wholly refurbished and remodelled 1920s grain silo on the Victoria and Alfred Waterfront pier area. What it isn’t is the 4,600m3 of volume that Heatherwick Studio has carved out of the centre of 42 cylindrical grain silos, 27m in height and 5.5m in diameter, to create the dramatic atrium.

The process of creating this cathedral-like space was complex and demanding, but aided by the use of state of the art slip form techniques when the silos were built nearly 100 years ago. ‘The formwork slips were about 1.5m high and jacked up manually on screw jacks as the concrete was cast,’ explains Heatherwick studio project leader Stepan Martinovsky. ‘The walls of the silos were cast 170mm thick, and to deal with the sideways thrust of the grain horizontal steel rings were cast into the concrete all the way up.’ While this obviated the need for bi-­directional steel reinforcing, which would have greatly increased the difficulty of carving the silos out, he adds that it meant there was little redundancy built in to this structure; silos had to be filled equally with grain to the same level to ensure lateral forces were evenly balanced

But the carving out of the silos resulted in massive uneven loadings across the structure. It would clearly have to be reinforced; the issue was how to do it while keeping the integrity of the silos. The strategy they adopted ended up serving a dual purpose; strengthening the original structure while creating the template from which the new volume would be carved.

The form, based on the shape of a single grain of corn, was first modelled as a point cloud in the office and then blown up to building scale. Each point was surveyed and positioned within the silos; short steel dowels were then run into the structure to allow a 250mm new zone, comprising a 50mm gap and 200mm of new concrete to be cast inside the silo circumference. With the new wall cast as the exact final form, the gargantuan task of removing the existing silo structure to form the void could begin. Diggers smashed through at lower levels, while far above the old concrete was accurately cut through to match the line of the new. Hanging scaffolding stretched down as work progressed, while sections of old concrete being cut away were lowered on chains. ‘At one point it was nothing more than diggers, sunlight cutting through the dust and hundreds of workers cutting away on the scaffolding. The process and its scale seemed epic,’ Martinovsky recalls. At lower levels the distinction between layers of old and new structure are clear to see. Credit: Iwan Baan

Evidence as to how the form was achieved is there to see if you care to look, he adds. The aggregate of the old silos is riddled with the brown, green and bluish hues of the rock surrounding Table Mountain, contrasted with the starker, finer, whiter new concrete. And separating the two, a tiny void in the reveal of the concrete that intimates the gap full of nothing but steel spigots connecting the old and new structures.

The final result is Gaudi-esque in its effect. MOCAA’s huge arcs and curves are reminiscent of the architect’s experiments with hung chains that went on to generate his Art Nouveau domes. And Gaudi’s inspiration from nature is also here.‘The silo was built to hold millions and millions of grains’, Martinovsky concludes, ‘so it seemed only natural that it inspire the new form; that a single grain, writ large, has been embedded within the building forever.’