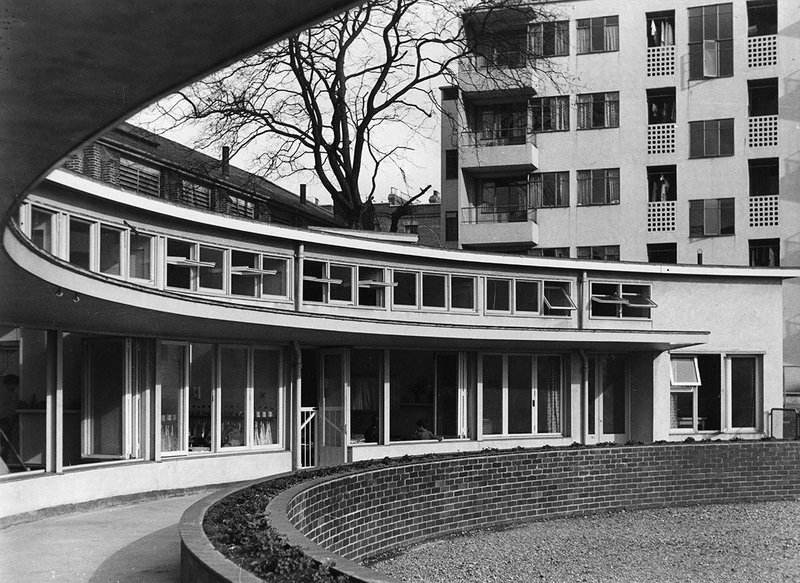 Today, passing by the congested, polluted end of Ladbroke Grove in North Kensington, you wouldn’t look twice at Kensal House, the modernist white block set back from the road. The dirty modern city has developed around it – a 1990s Sainsbury’s supermarket and car park behind, de facto arterial road beyond and Victorian parade opposite minus its shops. You would recognise the 1930s architecture, but the lack of celebration in the urban planning around it may lead you to think it is in the style of Maxwell Fry rather than Fry himself.

Indeed, when it was built, Kensal House’s intentions were modest: to provide housing for workers at the Gas Light & Coke Company, a major employer and owner of the site, as well as the land behind (the gasholders are still there). However, when the building was completed in 1936, it was quickly understood as a major piece of social history and a statement of what housing could be – ready for the UK’s relatively new full democracy following the Equal Franchise Act of 1928, where every individual could flourish and contribute. As gas and electricity competed, the building was to demonstrate that a full automatic fuel service was economically possible for even the cheapest dwellings. There was no electricity, but instead a gas fire, coke fire, gas copper, gas cooker, gas water heater and even a gas-powered iron.

Set up as a housing association to make use of government subsidies, Kensal House provided 54 three-bedroom and 14 two-bed flats in an area that had one of the worst death rates in London. Although designed by Maxwell Fry (1899-1987) in the years before his partnership with Jane Drew, the project was brought to fruition by a committee that included five architects and Elizabeth Denby, a social reformer who worked with Fry at Peckham Pioneer Health Centre.

The flats are laid out in two curving blocks. Walkways from the road allow step-free access to bicycle and pram storage at the base of each stairwell, from which the flats are arranged to minimise circulation space. Bedrooms are on the east to catch morning sun, while on the west are the living room, state-of-the-art kitchen with all mod cons and two balconies – one for leisure, one for drying laundry. The idea behind the project was to rebuild the family life that the slums had destroyed. Parents had their own bedroom which, with the living room, could be shut off from the children’s. Leisure time was to be put to constructive use in the ground floor communal rooms and garden. In a 60-place nursery around the former gasholder pit, Macmillan nurses taught working class children how to be helpful mini citizens with good habits and hygiene.

The nursery is now the home of a charity helping people with special needs. After a period of dilapidation, the community rooms are occupied by SPID, a site-specific theatre company that relocated here in 2005 and  uses the building as inspiration for the workshops it runs with young people. Residents can hire the spaces for £5 per hour, but incremental changes to their fabric, the replacement of French doors with glass blocks and a lack of investment over time has left them dark and dank.

Although the building’s exterior has just received a lick of bright white and blue paint, long-known problems remain. According to Anita Williams, who has lived with her family at Kensal House for 14 years, these include condensation and noise from the single-glazed metal windows. Room sizes do not meet modern expectations either: ‘It would be lovely to have a kitchen table, a bathroom that fits a full-size bath and bedrooms where you can open your wardrobe doors without sitting on the bed,’ she explains. ‘As it’s a listed building we are told changes cannot made, which I find bizarre as I’m sure Maxwell Fry would like the building to move with the times, not stay backwards.’

There is hope. Last year SPID signed a 25-year lease and has secured £1.9m to redevelop the communal rooms, restoring features as well as making them fit for modern needs. The rest of the former Gas Light & Coke Company site is also potentially up for renewal, touted as a possible Crossrail 2 destination. It will be interesting to see how much significance is given to the social and urban importance of Kensal House within that.