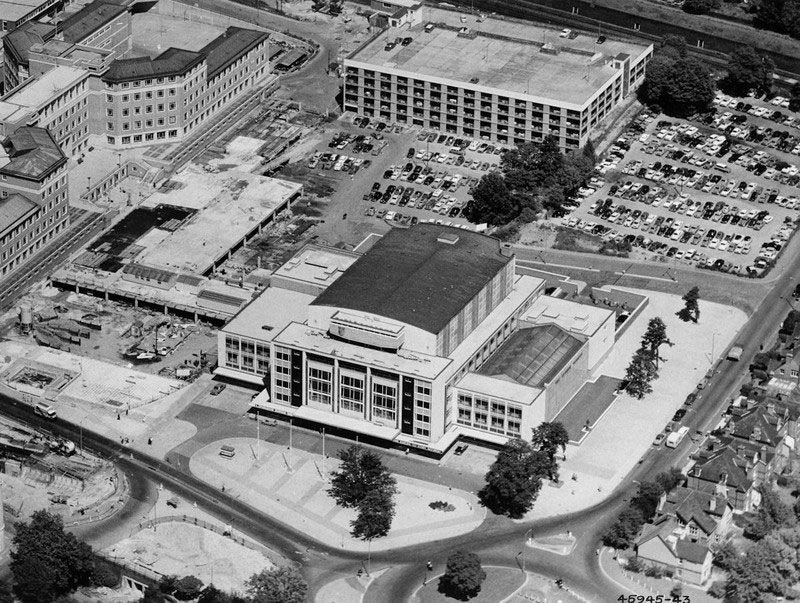 Fairfield Halls in 1962 with the car park deck, on which College Green sits, going up alongside. Credit: Archive

What are the ingredients of regeneration and local growth? Croydon’s version is writ large in the colourful pavement graphics and high rise apartment blocks flanking soon-to-be developed sites around Ruskin Square near East Croydon station (including two unpalatably high towers of 38 and 44 storeys by HTA). Another area to be tackled is the cacophony of sixties development divided by the canyon of the A212 which is eight lanes wide in places.

Between these two areas, in the spot where medieval fairs were held, is Croydon’s civic ballast: the courts, the college and Fairfield Halls. In the hands of Croydon Council’s arm’s-length developer, Brick by Brick, these too have been reconceived as drivers for regeneration. In the end, the college sidestepped changes. But can Fairfield Halls’ £42 million package of works help make this Croydon neighbourhood become a place worth visiting for Londoners? MICA, previously known as Rick Mather Architects, has taken on the challenge.

The raw material seems promising. Fairfield Halls is a similar vintage to the South Bank Centre’s Royal Festival Hall, an early 1960s expression of optimism, of high quality culture for the people. It has a huge 1,800-seat concert hall, with the Arnhem theatre in a wing on one side and what used to be a gallery on the other, now a conference venue. These elements are linked by a cascading public foyer. There is a pleasing plainness to the very rational facade and its original architect, Robert Atkinson and Partners, imbued it with a selective richness in mosaics and window surround details.

While the Royal Festival Hall fronts on to the Thames, Fairfield Halls faces the A212, with a sweeping drop-off to allow those in cars to arrive in style, as if in a Gordon Cullen Townscape drawing. MICA’s masterplan aims to reorientate Fairfield Halls by softening the approach from the town centre via College Green, opening it up to more incidental visits rather than just occasional big concert nights out. 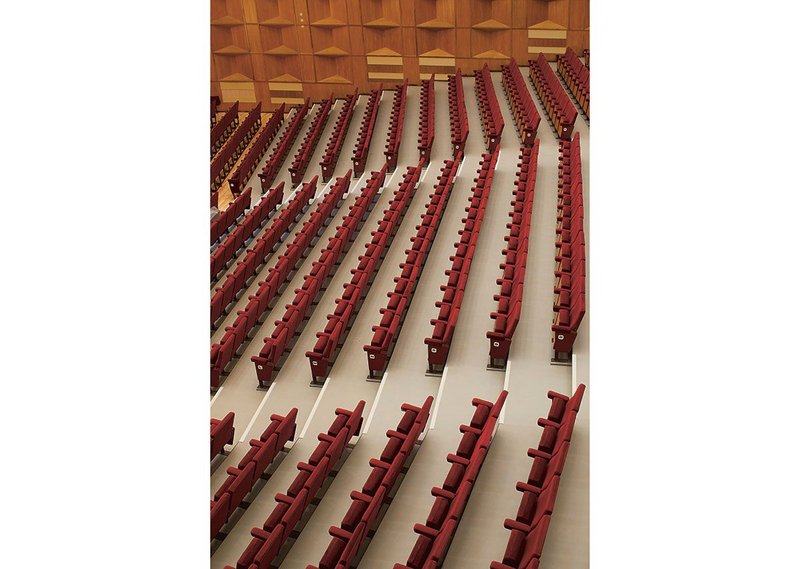 On the building itself this was dealt with by a glazed extension along the north flank facing the green, conceived by MICA as a café and public space, though the latter has been switched to activity spaces. What might gently nudge the project back towards an urban rather than solely a venue strategy is the recently announced reworking of College Green by an exciting team joining MICA, including Charles Holland, OOZE and Adam Nathaniel Furman. For Fairfield Halls though that is the most dramatic external move. Elsewhere there was a bit of tidying up with the demolition of the ‘plastic palace’ of old offices at the back and a polycarbonate ‘light box’ extension on top of the south wing.

Ascending to the sun lounge mezzanine on the first floor you can feel the expansive ambition of the original building. Foyer spaces flow into one another and the elevated view west puts the road in its place and shifts the view to Queen’s Gardens opposite. The cascade of stairs into the foyer and concert halls is echoed by a revived raked soffit with trough lights marking the stepping. The spare, elegant chandeliers, here and in the concert hall, have been relamped by a local firm. In the sun lounge they add grandeur and a sense of arrival. This is an important message as the chairs and carpets of the main foyer have all the pragmatic appeal of a council one stop shop; comfortable and cleanable for the free events intended to drive footfall but miserly if you have paid £35-plus for an evening of Jimmy Carr.

The Phoenix concert hall does, however, elicit a little gasp of surprise at its scale and intensity. Dug into the centre of the building it is very deep and relatively narrow for its scale. At lower levels the reworked colours give clarity and intensity to this tall white volume. Faceted timber panels of Japanese oak edge the lower walls, while sumptuous curves mark out the boxes above reconditioned oxblood red seats. MICA delved into the council archive and the memory of the ushers and their families to understand the building in more depth, from the grand opening by the Queen Mother to the colours of columns and walls. Some elements have been reintroduced, such as the original typeface, though not the pink walls that had crept in, nor the ash trays once integrated into walls and furniture.

Other little details remain, like the matrix of holes on the seat bases, designed to match the acoustic absorption of a person sitting on that seat. The original acoustician was Hope Bagenal who also worked on the Royal Festival Hall, and theatre consultant for the refurbishment, Anne Minors, is adamant that this hall has the best acoustics in the country. The demands are quite high as Fairfield has a varied programme, from its own Mozart Players and orchestras to pop acts and comedy. There are now additional acoustic hangings to be unfurled when major rock bands are booked. Packing the original canopy above the stage with infrastructure also helps with quick changeovers of amplification and scenery.

The whole of this volume was internally scaffolded for the project, as the ventilation was reworked with new nozzles to bring in fresh air more quietly than had previously been possible. This all involved ductwork threaded through the double-skinned walls. Other new elements range from a fire door to an organ and bespoke house lights in the ceiling.

There were surprises, of course, though the asbestos was expected. MICA has worked with plenty of buildings of this age including the 1960s Congress Theatre in Eastbourne and Seifert’s Centrepoint Tower on London’s Tottenham Court Road, as well as masterplanning the South Bank Centre. For Croydon’s BrickbyBrick this has perhaps been a bigger leap as a client, quite different in scale and uncertainty to the smaller housing projects it had been working on when it started, with all the complexity refurbishment adds.

Another strand of Fairfield Halls’ complexity is that it is tied up with the BrickbyBrick housing development behind, which has a first phase of 500 homes. Cross funding of the halls with housing rather mixes up the issues of section 106, the community infrastructure levy and the level of affordable housing. BrickbyBrick and MICA are trying to balance these in a recently revised higher density masterplan, with the encouragement of Croydon Council.

Until the housing, roadside landscape and College Green are at least under way it seems as though Fairfield Halls may only a be mild stimulus to activity, an isolated island in a sea of hoardings that might only be navigated once the tickets have been bought, rather than the drop-in destination it has the potential to be. Operator BH Live seems to be taking a pragmatic attitude to this – the number of bars has been reduced from eight to five and some public space envisaged giving onto the green repurposed for other activities. While Croydon is to be commended for taking this leap into cultural investment it might take some time to pay off. 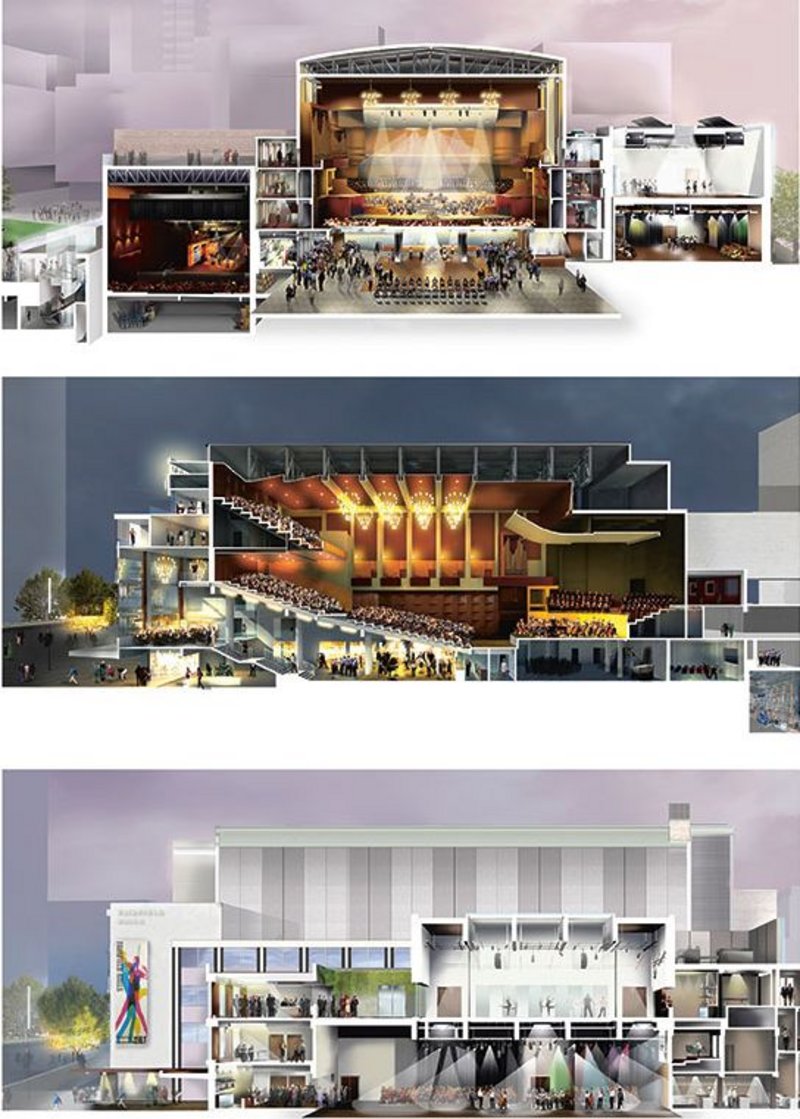 Top: The Phoenix concert hall is flanked by the Arnhem venue to the south (right) and the Ashcroft Theatre and extension to the north. Middle: the Arnhem wing to the south with its new space and terrace at the top. Bottom: Section through the reworked concert hall, foyer and sun lounge to the west. Credit: MICA