Will collaboration flourish at UCL’s impressive shared facilities for architecture and engineering at Here East? 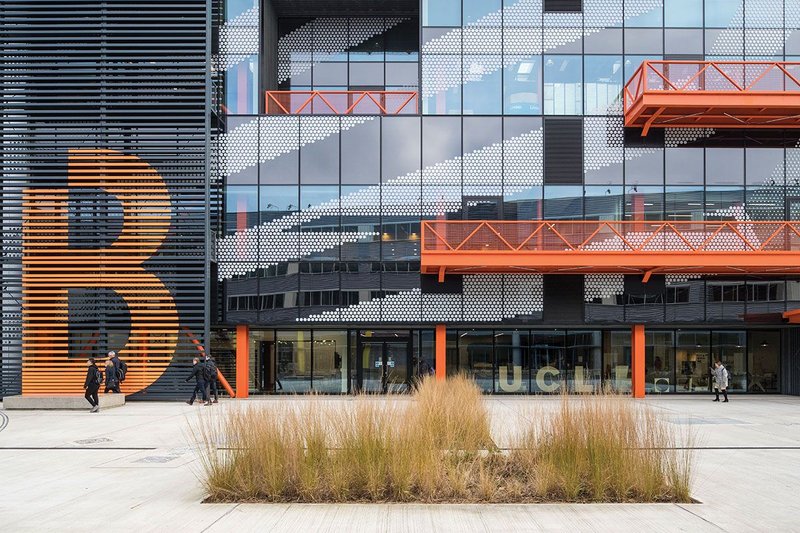 Entrance of UCL’s new Here East base, which occupies part of the former broadcast centre for the London 2012 Olympics. Credit: Tim Crocker

I needn’t have worried about finding University College London’s new east London outpost when I arrived at Hackney Wick. You really can’t miss Here East, the huge former broadcast centre for the London 2012 Olympics, situated near the edge of the Queen Elizabeth Olympic Park. Just to make sure no-one fails to spot it, the name stands tall in supersized bright orange lettering on the roof.

Since 2013, Hawkins\Brown has been transforming this 72,000m2 windowless box – originally designed by Allies & Morrison for legacy conversion – into Here East, a technology and creative campus with an intriguing mix of tenants from BT Sport to choreographer Wayne McGregor. A ‘gantry’ of studio shed structures and making spaces – designed in collaboration with Architecture 00 – is under construction at one end of the ­facade overlooking the park, and the V&A is recruiting an architect for a £25 million collections centre in another part of the building.

Here East is now also home to UCL’s 6,200m² new teaching and research facilities including robotics and advanced proto­typing space, for joint use by the Bartlett’s faculties of the Built Environment and of Engineering Sciences, as well as accommodating the new UCL Bartlett Real Estate Institute, a late addition to the brief. This £12 million fit-out has been designed by a separate team at Hawkins\Brown which, in a happy coincidence, has been working with UCL on its Bartlett estates development since 2012 – most recently completing a refurbishment of the Bartlett School of Architecture’s 22 Gordon Street home. The Here East base is the brave forerunner of UCL’s ongoing shift east, which will culminate in 2021/22 with the completion of UCL East campus south of the ArcelorMittal ­Orbit. This significant change of geographical focus is highly appropriate, says Bartlett dean Alan Penn, given that the whole concept of the Thames Gateway was dreamt up by the late Bartlett professor of planning and regeneration, Peter Hall. Now UCL has the chance to participate in that vision.

Penn is enthusiastic about the scope for interdisciplinary collaboration across the faculties that Here East offers in these co-­facilities, as well as the sheer scale of the shared space – both internal and external – that the departments had craved for years. He sees it as a great educational opportunity.

‘Putting the two faculties together potentially takes the architectural studio down a different line [with people] rubbing shoulders with those doing very hard science. I think some very interesting collaborations will come out of that,’ he says. ‘One of my ambitions is for architects to understand how these technologies work so they can appropriate their potential for the built environment. It’s very much the future of architecture.’

Hawkins\Brown’s task was to create an agile environment that would optimize this new collaborative ethos while retaining the atmosphere of creative intensity found at the Bloomsbury base. So can a new building ­really change the culture of how these UCL faculties work? Just a few months after the university has started to move in, it’s far too early to tell. But even before you get inside UCL’s new building, the practical advantages are clear. In the yard outside, students from the new Engineering and Architectural ­Design course are already using the large external space to build temporary structures. Bigger spatial gains are to be found inside, where the cavernous, 10m high interior is ideal for housing large-scale equipment such as test-rigs and the like.

Penn cites Cedric Price’s Fun Palace concept as a reference for the flexible nature of the new UCL space.

‘We designed it to be loose-fit to make it as flexible and future-proofed as possible,’ adds Hawkins\Brown associate Tom Noonan.

The core challenge was making what was basically a big dark shed fit for human occupation while at the same time accommodating the highly-controlled requirements of the testing, fabrication and lab areas. Key considerations were health and safety, and making the most of the natural light from the glazed facade already introduced along the 280m front elevation. According to Noonan, this logically led to the positioning of all teaching and studio space at the front of the building with manufacturing and testing, workshops and laboratories at the rear in artificially lit, mechanically ventilated spaces. A ‘runway’ thoroughfare stretches from the entrance to the back of the building, dividing controlled lab areas on one side from large test-rigs on the other. Here the architects made their biggest structural intervention – the creation of a 450mm thick ‘strong’ floor using 56 mini-pile foundations, which involved breaking and reinstating the protective gas ground membrane. Between the lobby and the workshops, a multi-use ‘Spanish Steps style’ auditorium space with views onto the workshops is designed for lectures, events, crits, performances. An extended mezzanine contains additional studio spaces on top of the labs and the new Real Estate Institute at the front of the building.

Everything is designed for ease of reconfiguration, with mobile studio furniture, high-level power and data on extendable cables, and plywood modular utility walls with integral storage and touch-down areas. In the rear zone, moveable glazed aluminium partitions screen-off test areas.

For such a heavy-use building, the architect chose robust, self-finishing materials, with the warmth of the plywood contrasting with exposed concrete and bursts of yellow highlights, most noticeably on the rubber ­auditorium floor. This stripped-back approach provides a calm and ordered backdrop to the messy activities.

‘It’s raw, robust and industrial – a blank canvas to accommodate the creativity of staff and academics,’ says Noonan.

A similar aesthetic with a higher spec is used in the Real Estate Institute, which features two Harvard-style lecture theatres for executive level education. 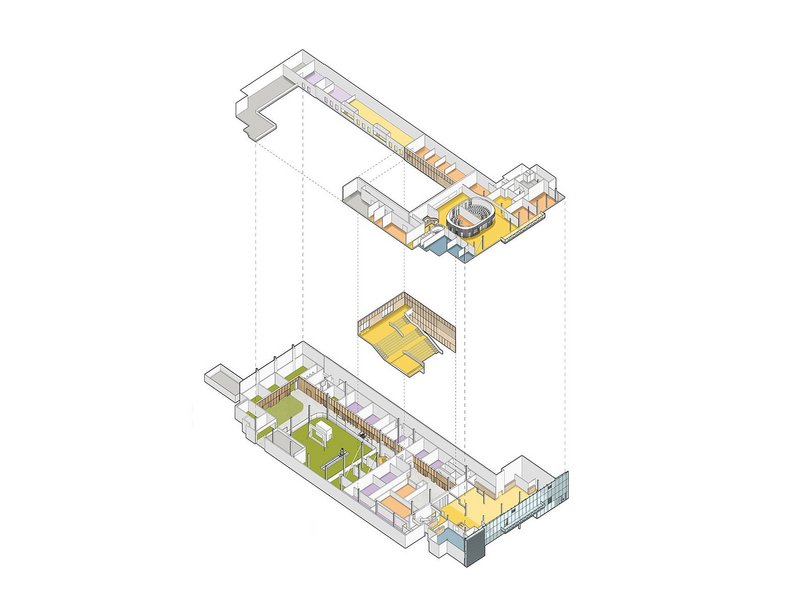 At this early point, there are still challenges for UCL, which is trying to encourage student flow between the Bloomsbury and Here East sites. It might be only 30 minutes away from Gordon Street, but even six years on from the Olympics it still feels like a something of a brave new world, with the surrounding urban context still taking shape. However, Here East’s growing tenant mix is promising, with the UCL students – adding to those of fellow higher education tenant Loughborough University – bringing visible liveliness to this fast-evolving complex.

UCL’s new facilities are undoubtedly impressive. But it’s the much hoped-for cross-fertilisations and inter-faculty collab­orations that take place within them that are the real prize. While these, like the surroundings area, will take much longer to crystallise, the early omens are good. 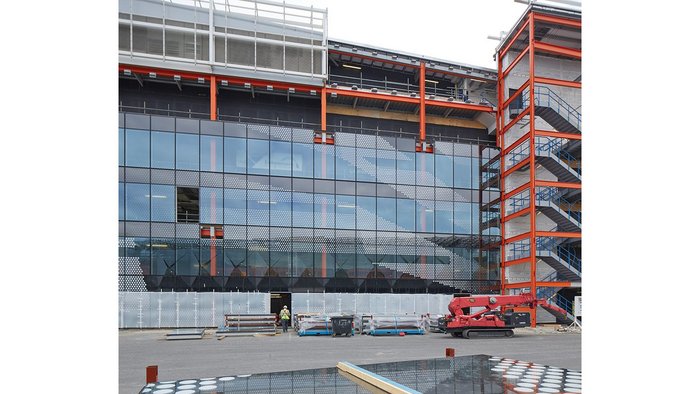 New outfit for a new job at Here East 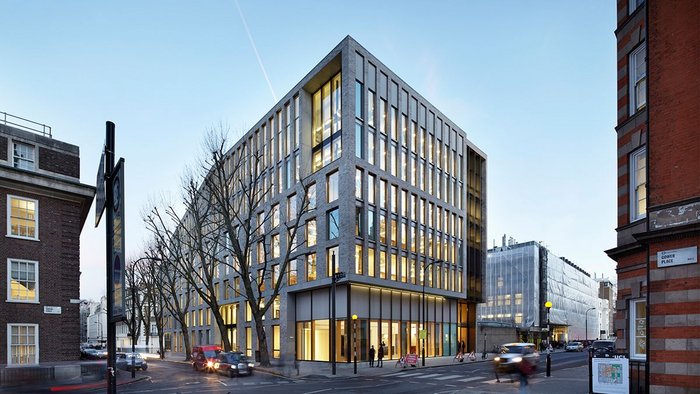 The Bartlett School of Architecture, Bloomsbury 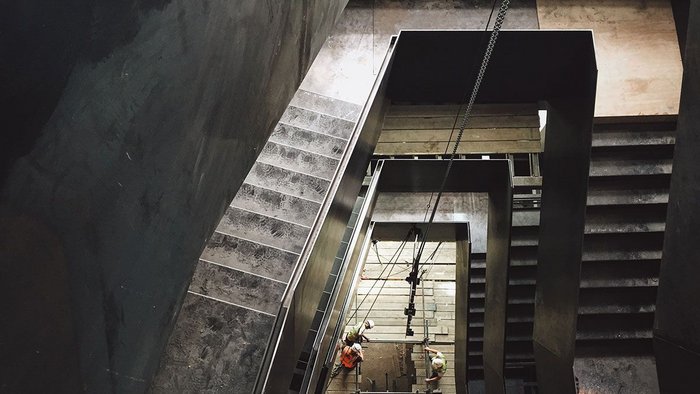 Designing for the designers