How dRMM's reinvented pier won this year's most coveted prize

An architect friend predicted it would win – it had to he told me, it’s such a weird typology.

For me, that alone didn’t convince me that dRMM’s scheme would be this year’s Stirling Prize winner. Until the announcement none of us at RIBA Journal had visited the project, nor had I ever been to the stretch of the south east coast between Brighton and Folkestone that in recent years has become packed with exemplary contemporary architecture – from those houses at Dungeness to HAT Projects’ Jerwood Gallery. I’ll admit that on paper, Hastings Pier seemed no more likely to win than the others: it’s not the first pier to be re-imagined as a contemporary multi-purpose space after all. White Arkitekter could be credited with kicking off the idea at Southend in 2009.

Nevertheless, a prize is awarded as much on the basis of what is visible as on what is not. The context of Hastings Pier is as important as its finely detailed components and architectural invention. And, well, at a time when the nation could be said to be gripped by nostalgia, in search of a prosperous future to be made from the relics of its grand historical past, perhaps Hastings Pier – literally rebuilt from the ashes by people pulling together – is the perfect answer.

Let’s be clear, the pleasure pier is a distinctly British phenomenon. The first recorded structure opened in 1814 on the Isle of Wight, and while there are now piers all over the world there’s something in our national psyche that worries about them, intertwining the nation’s success with theirs. Every time a pier gets a knock it is felt by us all. It’s therefore only right that when a pier comes along that can put the nation a little more at ease, it is deserving of Britain’s highest architectural award. It’s a good building too.

Like other pleasure piers, Hastings’ was originally built at a time when railways transformed seaside towns into popular resorts for mass tourism, when sea air was believed to be particularly beneficial for health. When it opened in 1872, it would have given these tourists the proximity to the sea they desired. At its peak in the 1960s its Victorian ballroom hosted Jimi Hendrix and The Rolling Stones. In our modern context, however, this kind of Victoriana has struggled to survive, becoming home to mega amusement arcades and fish and chippies at best, and at worst a tendency to fall into disrepair, get demolished or be ravaged beyond salvation by storms or fire.

The same is true at Hastings. After years of neglect it was closed in 2008 following storm damage, before being burnt down in 2010. Afraid it would be lost for good into the sea, a group of local people and pier enthusiasts joined forces to form the Hastings Pier Charity dedicated to saving it and establishing a new role for pleasure piers in the 21st century.

With the help of Heritage Lottery Fund cash, dRMM has pulled together a design that has provided not only a blueprint for how existing piers can be reimagined in the future, but also an evolving role for architects in the production of the built environment. Here dRMM became as involved as the charity as an agent for change; helping to campaign, getting the community on board and attracting funding.

dRMM has given Hastings Pier a new lease of life. The new-look pier has been repaired and rebuilt, then repurposed for modern life where maintenance costs are fully accounted. The project has been dealt with in two parts – the original ironwork column and truss structure, and the deck above with its two pavilions. The architect has adopted the same approach to each; to carefully survey what remained after the fire, keep what is salvageable and replace with contemporary versions what is not.

This project shows that local communities working with architects can make a huge difference. Councils across the country should take inspiration from Hastings Pier, and open their eyes to the unique assets that can be created when such collaborations take place – Judges' comment

A happily patchwork building is the result, where galvanized steelwork sits beside weather beaten Victorian ironwork below deck and a small new contemporary visitor centre replaces the original ballroom above deck to co-exist with a restored Victorian pavilion that has been glazed and turned into a new café. New has been cut into old; minimalist balustrades weave between original ornate runs and salvaged timber from the fire has now become the cladding for the new building, nailed up in a herringbone pattern to give it an architectural twist.

The vast pier deck is set aside as an uninterrupted flexible 277m long expanse for large-scale concerts, markets and public gatherings. The new timber-clad visitor centre in the centre of the pier also has a roof top viewing terrace, reached by a Villa Malaparte stair at one end of the building and providing a dramatic space for visitors to experience magnificent views along the coast and out across the English Channel.

Timber is used throughout the project, much of it reclaimed from the original pier: the visitor centre makes a feature of its scorched wood cladding. The reclaimed timber has also been used to create the pier’s new furniture, manufactured locally as part of an employment initiative. Inside, the spaces are simple, defined by wood lined walls and large windows. There's a shop, an office and two rooms for events, one with a fantastic end window looking out to sea.

Overall, Hastings Pier is a stripped back project that has been carefully executed with an aesthetic that feels characteristic of the seaside. Its already greyed timber contrasts beautifully with the surprisingly azure sea. With its trusses and many component parts, colourful beach huts and triangular flags, it references both serious architecture and Archigram’s Fun Palace aesthetic too – even on a slightly rainy autumnal weekday.

This year’s Stirling Prize winner shows that the smallest buildings can win the biggest awards. 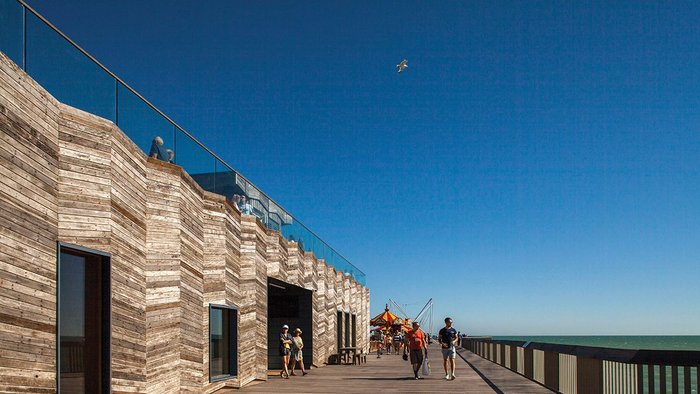 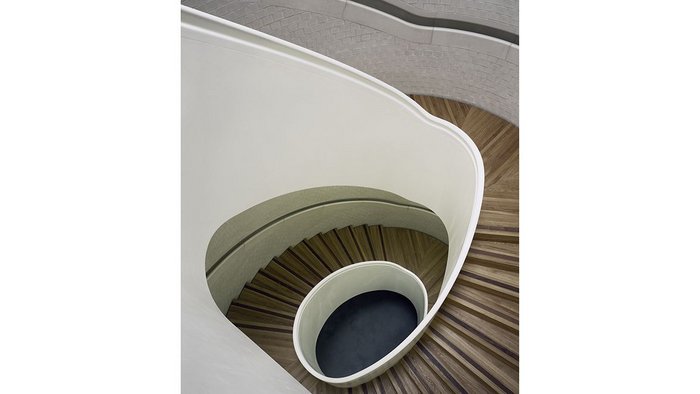