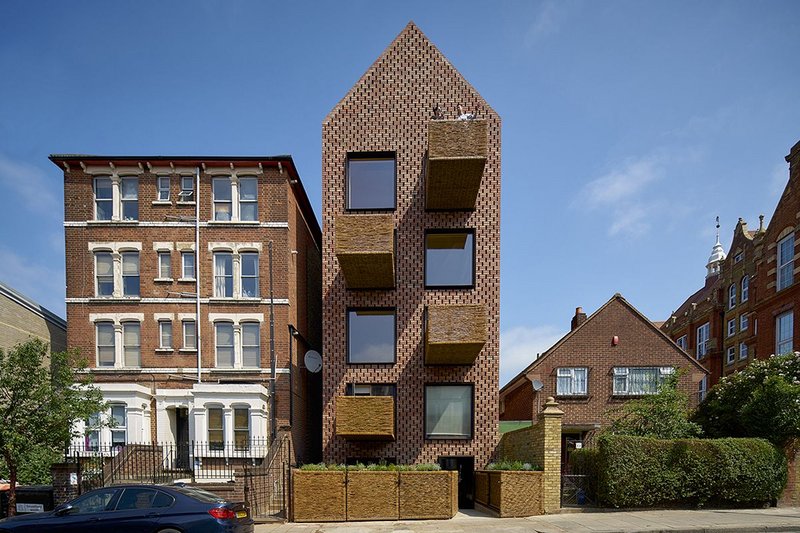 Wickerwork. I’m pretty sure that’s the first time that building material has appeared on the Stirling shortlist but there it is, used externally on the balconies and front garden fences  of the Barrett’s Grove six-apartment block in East London by Groupwork + Amin Taha.  Materiality is strongly in evidence throughout the shortlist of half a dozen buildings in fact, whether it’s the timber-patterned playfulness of dRMM’s Hastings Pier, the painted weatherboarding and black zinc of “Command of the Oceans” at Chatham Historic Dockyard in Kent by Baynes and Mitchell Architects, or the sumptuous raw concrete of the Juergen Teller photography studio in west London by 6a architects.

The World Conservation and Exhibitions Centre at the British Museum by Rogers Stirk Harbour + Partners disguises its bulk through massing (broken down into five pavilions, with much of it sunk into the ground) and makes good use of fossil-rich Portland stone and kiln-fired semi-obscured glass cladding.  While the City of Glasgow College City Campus by Reiach & Hall and Michael Laird Architects, an enormous white building at first giving an impression of icy restraint, works by contrast with the characteristic stone and brick of its city with warmer interiors making much use of timber.

Could this be the year when more playful, domestic scale architecture is preferred over complex city-scale projects?

So much for materials: what do the building types tell us about what’s going on in UK architecture at the moment? Half of them (British Museum, Hastings Pier, Chatham Dockyard are places you’d go for a day out , with such visitor destinations still a growth area. As ever, it’s perhaps more about what isn’t on the list: schools, social housing, civic buildings (though there were some fine examples of the latter in the national awards which form the longlist for the Stirling Prize).

Those looking for factories and laboratories will find them, perhaps unexpectedly, at the British Museum: that project is as much about industrial processes and distribution as it is about public exhibitions.  Industry and education are equally to be found in the mega-campus of the City of Glasgow College. Both of these have considerable civic presence as of course dRMM’s, the result of a great deal of community engagement .

There are well-established names there who are no strangers to the Stirling shortlist including one firm – Rogers Stirk Harbour - that has twice previously won the prize. But it is also encouraging to see three names new to this stratospheric realm – 6a architects, Baynes and Mitchell, and Groupwork + Amin Taha.

Stylistically? Once again the shortlist demonstrates the plurality of aesthetic approaches now being applied, from the bolt-together offsite techniques of what use to be called high-tech to the painstaking pleasures of handicraft.  The responses to context shown here also vary greatly but one thing comes through strongly: contextualism does not have to mean more or less careful copying of what’s there already, though there’s a place for that:  rather, as shown here, it can be an extrapolation from existing forms and proportions.  You could characterise some of these shortlisted buildings as 'progressive vernacular'.

Outgoing RIBA President Jane Duncan makes the point that these buildings were commissioned at a time of great economic uncertainty, make every penny count and are all transformative in their localities. As for me, I’m wondering if this could be a year when more playful, domestic-scaled architecture is preferred over demandingly complex city-scale projects.  But at the time of writing (early July, with the Stirling Prize not announced until October 31 – be there!) even the judges themselves won’t know that yet.