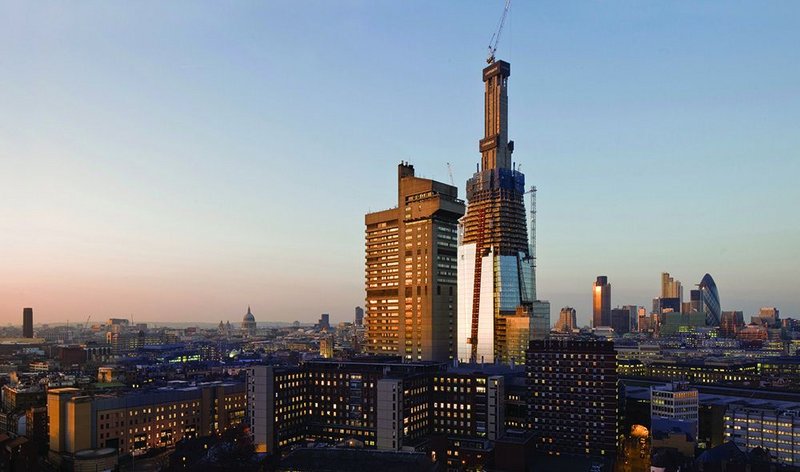 Watkins Gray’s original 1974 brutalist tower was for a long time the tallest hospital in the world. It is again.

One wonders if Guy’s Hospital tower is feeling a little vertically challenged, overshadowed as it is by the nearby Shard. If it is, it’s doing something about it. The 1974 concrete brutalist structure looks set to reclaim the title of tallest hospital tower in the world: artist Carsten Nicolai’s 14m high light sculpture will take its height to 148.65m when complete, relegating Hong Kong’s Sanatorium Tower to second place – by 15mm. But that’s not the only way it’s peeking above the parapet. The £26m refurbishment of the 34-storey tower, by Penoyre and Prasad and engineer Arup, not only deals with serious spalling of its 300mm thick in situ cast concrete facade, but improves its performance with a distinctive aluminium overcladding that reduces heat gain and loss by nearly 20%.

The original architect, Watkins Gray, gave the design a modernist slant too, dividing it into ‘serving’ and ‘served’ spaces. The ‘user tower’, held hospital wards and ward service zones on a 1200m2 floor plate, while the ‘comms tower’ had the lifts, stairs and service risers; a discreet ‘link bridge’ connecting the two. Over time, the clarity of the floor plate has been compromised, as hospital facilities were decanted and the building dedicated solely to the expanding research and clinical needs of the long-established teaching hospital. But the language of the two towers remained distinct: the user tower identified by strong horizontal banding of concrete balconies, recessed windows and spandrel panels, and the comms tower in striated in-situ cast concrete. It was the dangerous spalling of this skin that drove the refurbishment of the whole structure. 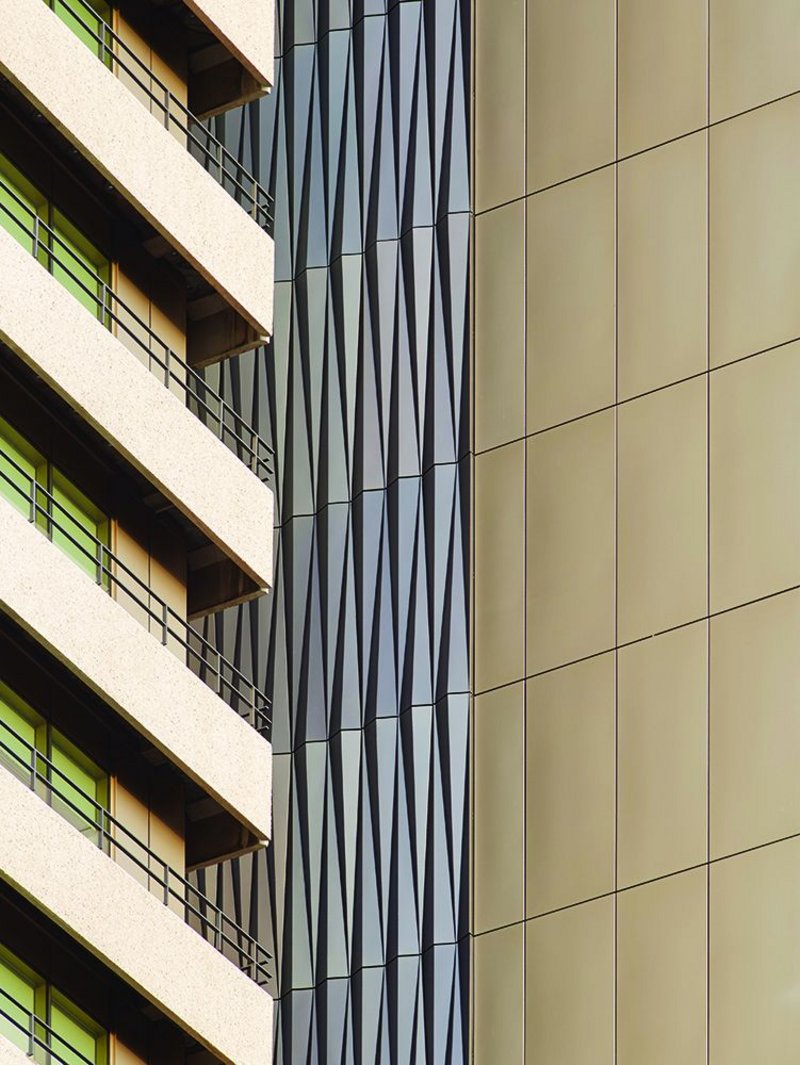 Faceted blue/grey and flat pale umber coloured anodised panels introduce plays of light to a facade that had formerly only absorbed it.

But it wasn’t the only reason, explains Neil Allfrey, associate at Penoyre and Prasad: ‘The user tower’s plastic coated double-glazed steel windows suffered extensively from condensation, and there was no insulation in the brick walls that formed the spandrel panels below them,’ he says. While a total re-clad was considered, Guys and St Thomas’ NHS Foundation Trust opted to deal only with the areas of real concern – the windows and spandrels of the user tower, the concrete of the comms tower, and a re-clad of the link structure between them.

After a detailed survey of the problematic areas on the facade, remediating the concrete involved teams of abseilers chipping away loose concrete, treating the reinforcement with anti-corrosion paint and then filling in with repair mortar. Only once the facade had been addressed could the cladding contractor run down it attaching L-shaped brackets, to which a horizontal cladding rail was attached – the primary hanging point for the new anodised aluminium panels. Allfrey explains that the choice of cladding material wasn’t purely aesthetic, but was governed by engineer Arup’s desire to limit further loadings on the structure. Strangely, structural analysis revealed that while it was able to deal with the direct loadings of overcladding, it was less amenable to wind forces applying lateral loadings to the structure – especially as at the top of the building wind speeds can exceed 100mph. As a result, lighter aluminium cladding was chosen to mitigate excessive loading.

To create a facade effect, the firm chose folded and flat metal anodised panels in blue/grey and pale umber – solid for the comms tower and perforated for the lower levels of the user tower. Allfrey says the panels are thick: the folding rainscreen ones have a zone of up to 200mm to create a total depth of 420mm. The 170mm Rockwool insulation layer, fixed directly to the concrete surface, contributes to a raised U-value of the facade to 0.15W/m2K. Allfrey says it was decided to make more of a feature of the bridge, so the firm installed 3.8m full height double glazed panels. This responds to its orientation – on the north side, the glass is low ‘e’ to prevent heat loss, on the south low ‘g’, stops heat gain. ‘Varying colour hues in the glass due to the different coatings wasn’t an issue,’ notes Allfrey. ‘We wanted the glass to work functionally for us.’ 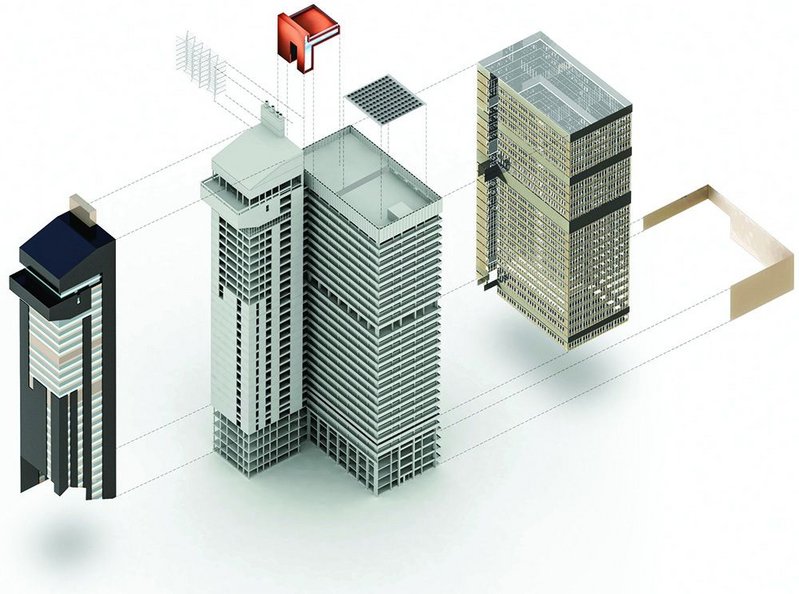 The logistics of fixing the panels to the facade was particularly challenging for main contractor Balfour Beatty as the tight urban site left nowhere for a tower crane to go. It overcame the problem by the most basic of means: attaching a hoist to the building and constructing a temporary works deck at tenth floor level. Panels were hoisted up from there by riggers, who went about fixing them manually to the rails running along the concrete face. Further temporary decking and scaffolding were required to clad the distinctive protruding form of the main lecture theatre and artist Nicolai’s light box. On the user tower, with access to the facade directly from the balconies, Allfrey says the issue was far less problematic. Indeed, access to the facade was one of the factors behind the reasoning not to build the facade out to the balcony line- as it was, the overcladding and insulation was positioned 260mm forward of the weatherline, creating deep window reveals. ‘The benefit of this was that the building could carry on functioning without disruption,’ he adds, ‘and being a panel with its own insulation and structural integrity, in the future the existing building line could be removed, increasing the floorplate by 500mm all the way around.’ Cold bridging still occurs where the balcony meets the floor slab, but with the overcladding dressing down to the floor and up to the slab soffit, this has, as much as possible, been minimised.

That said, Allfrey points out that, with no plan to upgrade the lumbering M&E plant, the irony is that the firm had to ensure that the facade did not overperform, causing internal overheating. So the result of the upgrade? Heat gains and losses from the facade are expected to reduce by 18.5%, with total building energy consumption dropping 7.6%. The refurbishment is also expected to cut the building’s CO2 emissions by 9.4%, equating to 8000 tonnes of CO2 over 30 years, with a carbon payback from the cladding materials selected in around 12 years. And that’s all been achieved with a skin that instead of soaking up light now reflects and scatters it; a facade in constant, subtle modulation. 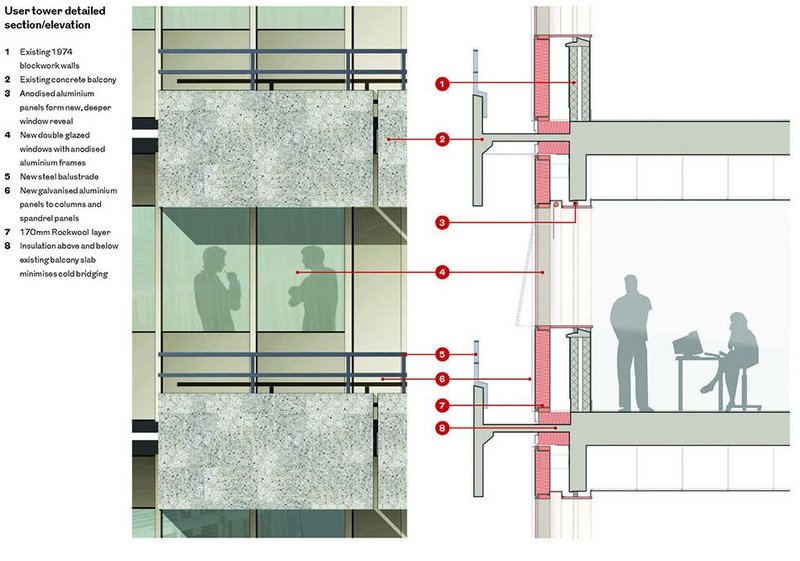