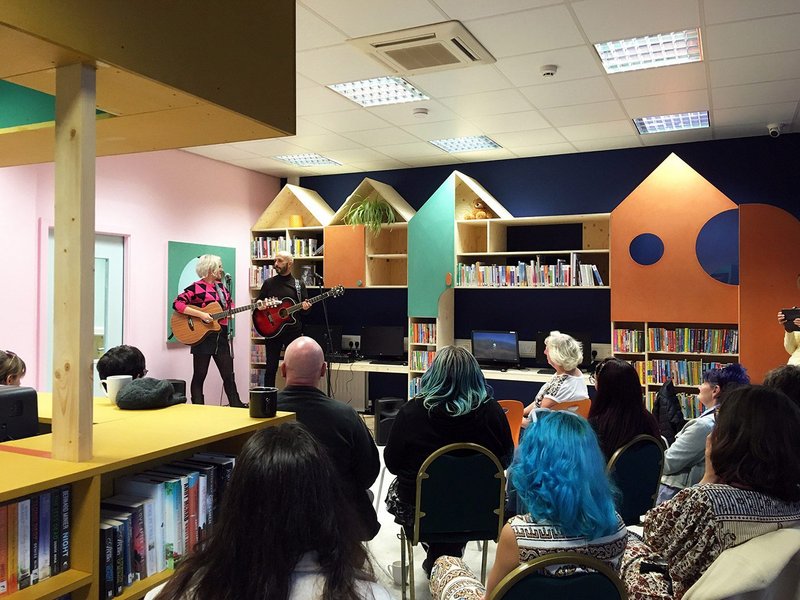 The library and launderette is looking to extend its community reach by staying open for evening events. Credit: Lee Ivett

Wash Your Words was developed through neighbourhood conversations on deficit, no access to washing machines, children in dirty clothes and poor health. It provides somewhere for people to wash clothes, read, learn and create art but also a space for imagination and chance encounters. Its joyful design raises expectations of the quality of architecture people should demand of social housing estates, changing the conversation from what people don’t have, to what community asset models should look like from a social, economic and environmental perspective.

The local Langdale library was identified as an asset that was fragile due to exceptionally small premises that limited access and activity and would benefit from a design that facilitated greater engagement and a desire to use the amenity for longer periods. The initial process identified a vacant premises that had been used as a housing office on the site and returned it to being a tangible and accessible civic amenity space.

The new interior fit-out has been co-produced, co-designed and constructed with the local community, empowering them in the process and engendering a sense of creative ownership. A key aspect in its creation was an engagement with the digital fabrication facilities at the University of Central Lancashire, introducing participants to new knowledge and skills related to contemporary craft and making. The facility immediately addresses issues of fuel poverty and limited access to laundry facilities as well as a lack of space for the local housing association to conduct sensitive one-to-one consultation.

The participatory model is ongoing with the space’s use and maintenance shared among the community. The playful overlap of library, art workshops and laundry encourages conversations and associations between different user groups as well as a sense of shared responsibility.

Its thinking obviously resonated with the judges. While acknowledging that it was not his style of architecture, Takeshi Hayatsu acknowledged that the design ‘supports the initiative very clearly in an innovative way’. He also recognised ‘the direct involvement of the architects in its construction, which is an approach I’d personally endorse’. RCKa’s Anthony Staples meanwhile thought it ‘fantastic; the community built it, you can see how it was made and how informed the end result was … it responds to community needs while having a whole lot of fun doing it’.