Butterfly is surely the only stroke to use in the Sky Pool, a cast and bonded acrylic swimming pool slung 10 storeys up between two towers. But how was it made? 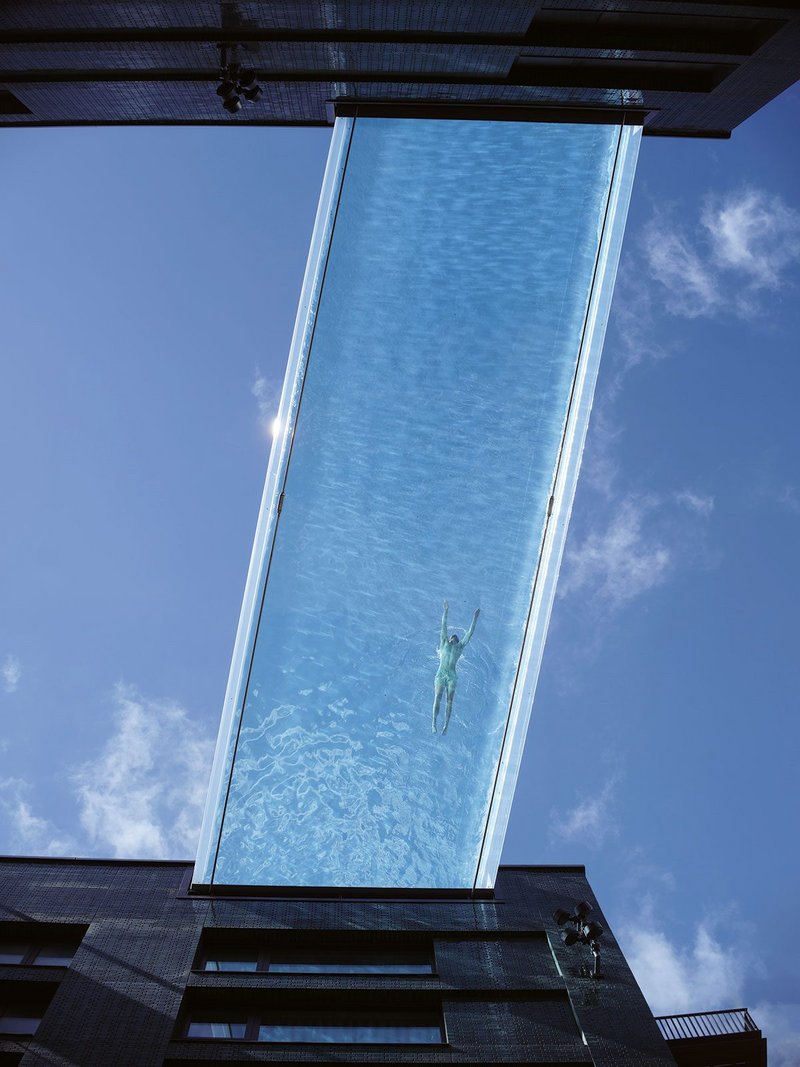 The Sky Pool seen from below. The 15m monolithic acrylic structure is clasped to the steel tubs either side by two steel tendons, visible on each side. Credit: Simon Kennedy

The Sky Pool, spanning the space between two towers of EcoWorld Ballymore’s Embassy Gardens in London, since opening this summer, became the unintended focus for wider discussions on social equality; but there is no taking anything from the fact that the pool itself, 10 storeys above ground, is an engineering feat, a close collaboration between architect, engineer and fabricator to meet the client’s desire for a radical statement at its riverside development.

The requirement to fit a 25m pool at 10-storey height, and conflicting rooftop plant ­demands, spawned the idea of using the pool as a viaduct between the two buildings; it was also directly accessible from both towers.

Engineer Eckersley O’Callaghan was brought on board by HAL due to its expertise in the design of glass structures – notably with Apple Stores globally. But interestingly, the firm plumped for cast acrylic rather than glass, despite it having one quarter the working strength and 20 times more deflection under similar loads, says Brian Eckersley. This was partly because acrylic is less brittle and far lighter than glass: 1.2t/m³ rather than 2.7t/m³; also, acrylic at the necessary thickness, was far more transparent than glass laminations and it was much simpler to join the component pieces together with transparent bonded joints.

Engineering concerns included the weight and hydrostatic pressure of 150t of water on the pool floor and walls, horizontal wind loading and differential vertical settlement of the two concrete towers, as well as the pool’s skewed relationship to them. Add to this the intrinsic thermal expansion of the acrylic itself, and differential stresses between outside and pool surfaces and the engineer had plenty to consider.

Its response was a cast and bonded acrylic ‘U’ form made of six 356mm thick floor pieces and four 3m high 178mm thick wall sections, the latter acting as two enormous beams. This monolithic acrylic element is sandwiched bet­ween two 5m long steel ‘tubs’ sat on the two towers, containing steps, lighting and filtration equipment. Holding the three pieces together are two pre-tensioned steel tendons running between the steel tubs. These connect to a spring stack either side which accommodates thermal expansion and contraction of the acrylic of up to 80mm while holding the structure in constant tension to avoid leaking. The whole structure sits on 10 bridge bearings on the concrete towers, which allows them and the pool structure to move relative to each other.

Carried out by the world leader in acrylic fabrication, Reynolds Polymers in Colorado, USA, the monolithic design required the construction of a bespoke temporary oven to allow the completed structure to be repeatedly heated and cooled as part of the annealing process to crucially mitigate residual stresses in the acrylic bonding process. It was one of the most challenging designs the firm had worked on.

Transported to the UK by ship, delivered by Thames barge and hoisted into place in one day, the completed installation – shimmering blue, mesmerising and controversial – looks set to remain a talking point long into the future.