Northumberland is a big place for young architecture masters students to build in. Rural, and protected as a national park, the wide open spaces circling the Rochester Roundhouse have a rolling topography huge enough to have been walked by giants. Although the more sheltered Kielder Forest to the west has attracted well established architects in recent years, at 45 minutes by car north of Newcastle, Rochester’s intimidating landscape leaves nowhere to hide. Any building makes a big impact, no matter how small.

And the diminutive Rochester Roundhouse certainly does. It remodels the stone walls of a derelict roundhouse as an open air seating and activity area and adds a new timber pavilion for indoor activities and shelter behind. The two parts are connected by timber decking that runs as a terrace in front of the pavilion and into the roundhouse walls for flooring.

The remote site is appropriate to a project called Testing Ground – a partnership between the Kielder Art and Architecture programme and nearby Newcastle University’s School of Architecture that is now in its fifth year. As the third in this series, Rochester Roundhouse stood out for this year’s MacEwen Award judges both for its tangible ‘high-class’ design and nice detailing, as well as its teaching and learning programme to produce architecture graduates with experience working on live, budget-conscious projects from beginning to end. Plus of course the achievement of overcoming the immense challenges of getting anything built in a national park without any planning objections. 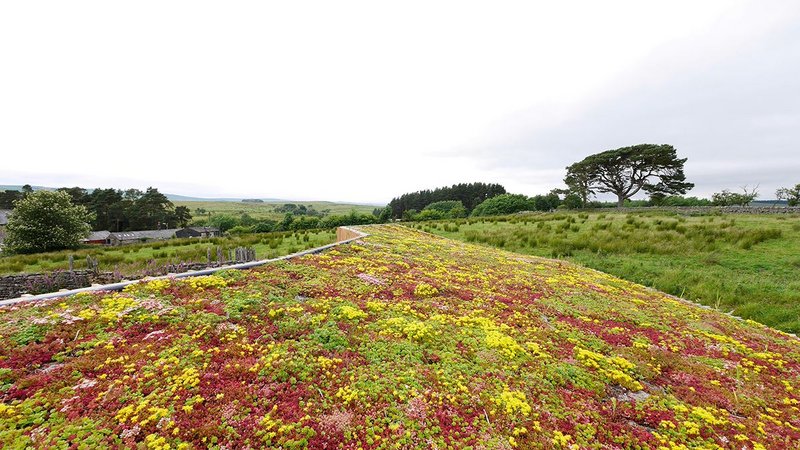 ‘Rochester Roundhouse is pretty high class stuff from students,’ said chair of the judges Hugh Pearman. ‘You see the archi-tic of timber but its nicely detailed and it looks at home in its surroundings.’

Students on the scheme opt in to the module not knowing what the project might be – aware only that something will happen and the university will contribute towards the material costs of building. In this case it gave the students £10,000, with a further £5,000 coming from Kielder Forest and Water.

Started in January 2015 by nine students who signed up for the Testing Ground module at Newcastle, and completed in 16 months, the project engaged with the local community to transform the site of a former educational establishment.

Under the programme, these nine were left to participate with local residents, teasing a positive response from a neglected site, while learning how to present and speak to real clients. The group organised community meetings to create a brief and proposals in response to the desire for a building that would sit between the landscape and village hall in use, and provide an in-between space to retreat to in changeable weather.

Consequently, the roundhouse’s aesthetic is simple and is designed to be entirely constructible by the students – only the skimming of the pavilion’s interior walls was done by an outside contractor. But that should not deflect from the project’s overall ambition and dexterity. The programme forces the students to resolve every niggle and corner of the building beyond most architectural education, from concept to selecting which tools to build with.

The pavilion was built on site as a timber frame on 450mm by 450mm concrete foundations fitted with adjustable pads as a low-tech way of ensuring the structure was level. The frame was then boxed in, covered with a weatherproof membrane, battened down, clad in larch and planted with a sedum roof. Only the doors and windows, which were also made by the students, were built in the university workshop. 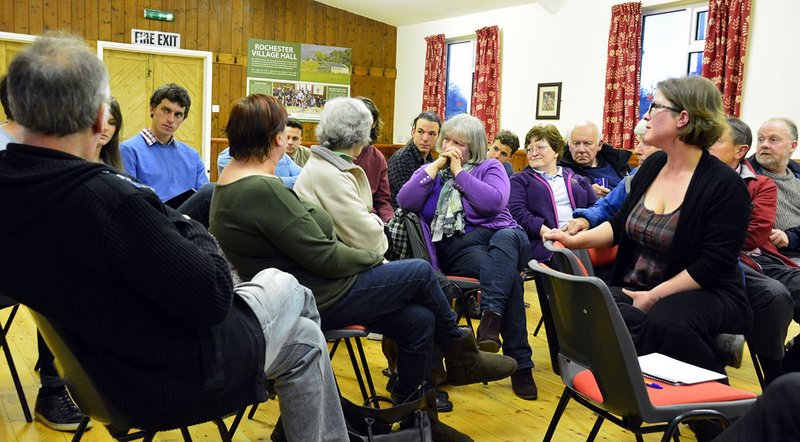 Aside from the design and plan, the judges commended the involvement of local trades and the community all the way through the project, as client and as build volunteers, which encouraged ownership of the building before handover. Local residents built the outdoor deck, and a local dry stone waller taught students how to remodel the stone walls of the house into amphitheatre seating.

This project differs from the two previous completed years of Testing Ground in its context-specific and enhancing architecture – the position of the pavilion up the hill behind the seating area, its curving front elevation, detailing on the cladding, beautifully exposed beams inside and the neat swivel hinge doors which have a purist Zen quality about them. It is a tranquil space with unpainted plaster. The fact that it is only designed for fair weather would be the only criticism. Without plumbing or electricity, it is usable for only a fraction of the year, which on my visit in January seemed a shame. It is also difficult to imagine toddlers gathering for long without washrooms.

Nevertheless the Rochester Roundhouse has already provided an inspirational backdrop for a music festival, ukulele workshop and storytelling event, and the remaining enclosure will also now become part of a further experimental project for a group of ecologists at the university.

The other side of the coin is what the Testing Ground project as a whole does for the alumni of this course in teaching how to be socially responsible architects and contractors. Although the school’s head Graham Farmer says many have gone into big practices to complete part 3, it will be interesting to see how the graduates proceed in their careers and whether the usual salaried jobs will ever fully quench their architectural thirst after producing something so commendable and all-encompassing so early on. Future architectural giants perhaps?