Irvine Sellar and Renzo Piano have made the Shard one of the most discussed buildings to go up in London for some years. The height might be the headline, but it’s much more than just a towering spike 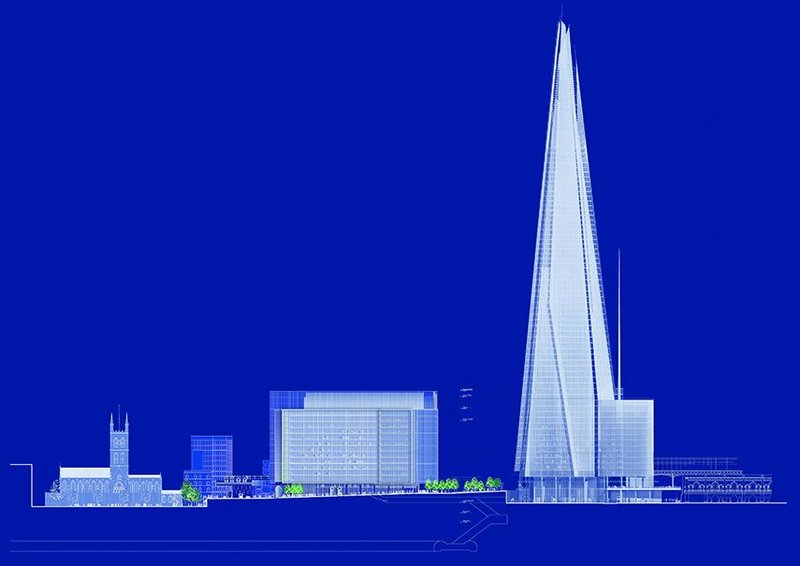 The Shard – a rare example of a skyscraper with a slightly superior nickname provided by its own architect – is just as unusual, in British terms, in being mixed-use.  We are used to such buildings being monoculturally either offices or residential. There are occasional exceptions – a pioneer was the mid- 1970s David Murray John tower in Swindon by Douglas Stephen and BDP, which mixed offices, social housing and retail. The Beetham Towers in Manchester and Birmingham in the mid 2000s by Ian Simpson Architects each contain  a hotel as well as apartments. John Lyall Architects’ 2009 ‘The Mill’ tower in Ipswich (November 2009) incorporates a dance venue and retail outlets.  But none comes close to the ambitions of Renzo Piano’s Shard at London Bridge. ‘I hope you feel this building has a soul,’ remarked Piano at its unveiling.’ It is not a symbol of arrogance but a simple spire, flirting with the weather.’

Like all speculative buildings, to some extent the Shard has no client. There is, of course, the original developer, still on board, Irvine Sellar.  The mix of uses represents his attempts over time to hedge his bets, not to be over-dependent on just one sector.  Then there are his financial backers, the rulers and bankers of the state of Qatar, who take a long view – the Shard, along with other London investments such as Chelsea Barracks, is just part of a global investment strategy whereby the sovereign wealth generated by oil revenues is turned into revenue-generating real estate.  There is the hotel operator, the luxury Shangri-La chain.  We the public were represented by the planning process, culminating in a long public inquiry.  The Shard was proposed at a time of boom, when rampant capitalism and the urban-density mantra of Richard Rogers’ Urban Taskforce came together, encouraged by a socialist London mayor – Ken Livingstone – who was excited by very tall buildings. 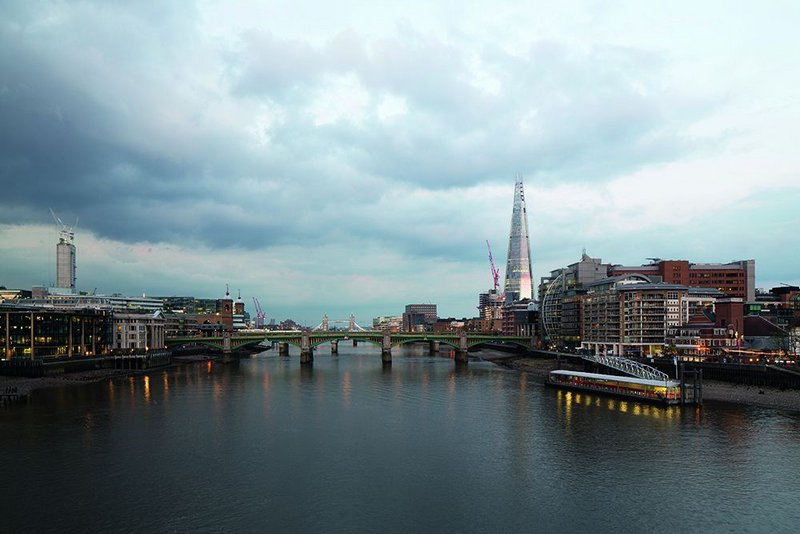 It’s all about the weather: the Shard’s angled facetted flanks change with the sky. Directly opposite, the core of Rafael Viñoly’s ‘Walkie Talkie’ tower rises. Credit: Renzo Piano Building Workshop

And yes, it’s tall, at 1,016ft Europe’s tallest, but it was meant to be some 300ft higher as first sketched in 2000 by Piano. He was brought in by Sellar to improve on an earlier scheme by Broadway Malyan.  He’d been told a big building needed a big-name architect, and Piano’s back-of-a-Berlin-menu sketch of leaning, overlapping slivers of glass did the business: suddenly an unfeasibly big project by a relatively small-time developer was being taken seriously. The extended version had better proportions: once it was squashed considerably by the Civil Aviation Authority (planes bound for both Heathrow and London City Airport pass overhead here), it started to sprout lumps at the bottom. These were perhaps to reclaim the ‘lost’ floorspace, perhaps just to provide large very floorplates for those organisations who like that kind of thing.  As built, they take the form of a very large lower-rise office building (‘The Place’, hardly an inspired name) just west of the main tower but sharing the same concourse, and a couple of attached chunks of 15-storey floorspace and cooling plant on the eastern flank of the tower. These are very visible from St Thomas Street where it faces Guy’s Hospital: they do not relate to the geometry of the tower, though they share the same glazing system, and are just butt-jointed to it with an apologetic slight recess. A slot between these ‘gob-ons’ (in builder-speak) reveals the base of the tower proper, but it’s a view few will see.

‘Piano’s back-of-a-Berlin-menu sketch of leaning, overlapping slivers of glass did the business: suddenly an unfeasibly big project by a relatively small-time developer was being taken seriously’

Any building this tall obviously has to work both at a distance and from street level.  When it came to the close-up, the classic American inter-war approach was to provide a street frontage and cornice level which worked in its own right, such that from the street you were hardly aware of the tower above. Later this translated into the postwar ‘tower and podium’ approach. The Shard has a ready-made podium – it is the raised, redesigned concourse of London Bridge Station, itself dictated by the height at which the railway lines are set, perched on their vast system of converging viaducts, one of the engineering wonders of Britain. From this concourse, the Shard with its sturdy angled white-painted H-section steel legs and skirt of fritted-glass canopies rises convincingly. It is less convincing from St Thomas Street behind, where – apart from these looming gob-ons – Piano partly takes up the level difference with a brick plinth, though there is a ground-level entrance for the tower as well. Doubtless there is plant stuffed behind the wall and it’s got to go somewhere. Moreover the thin Roman bricks are definitely superior, but it would have been nice if this bit of the street had been animated with cafés and shops. 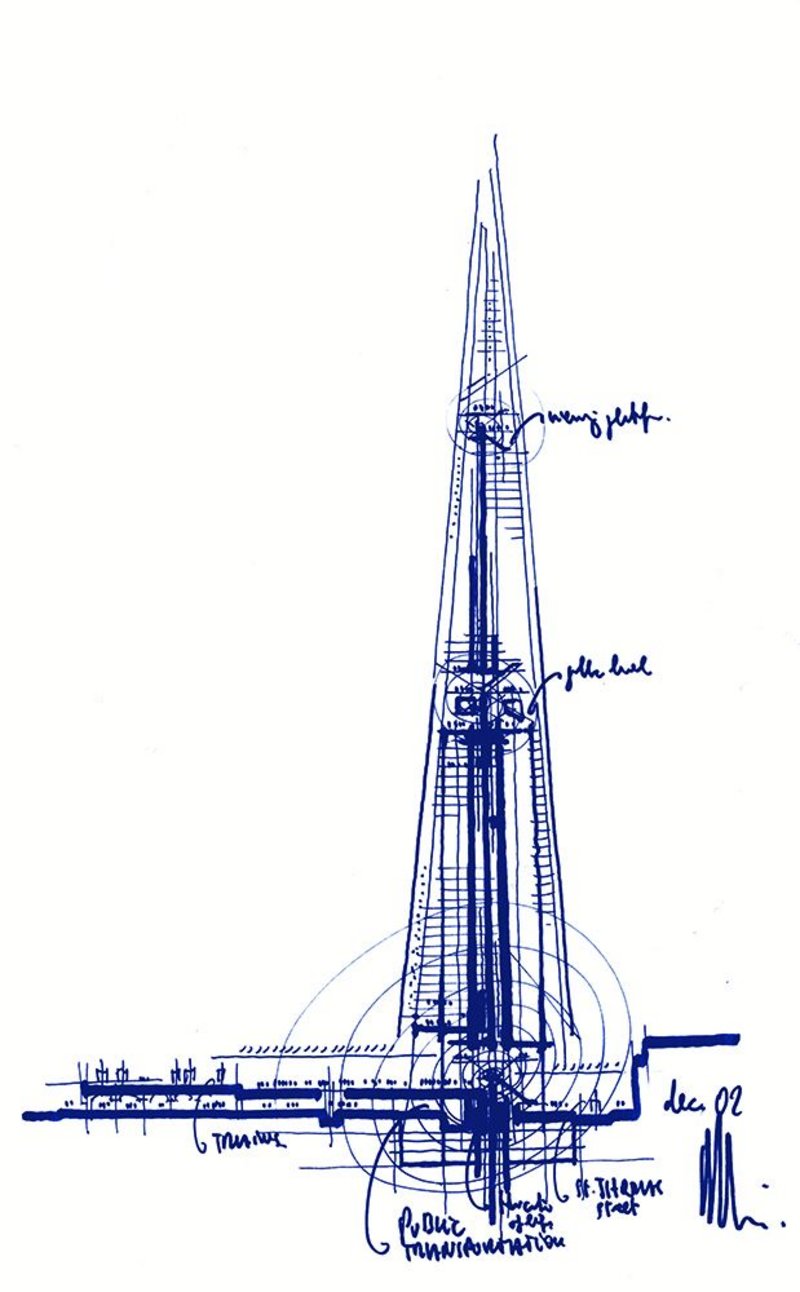 Step back a little from here, however, and the Shard starts to convince again. We are used to the images of it on the City of London skyline, other towers around it, but this is – just – south of the river. How does it sit in its locality?  Seen from the low, huddled and fast-gentrifying streets of Southwark to the south it becomes a futurist vision, the 21st century city rising, glittering, above the mediaeval one. It does, as intended, have the characteristics of a spire, though a complex one: broadly an irregular hexagon in plan, modifying in shape as it rises. At the top, of course, it has its famous hollow crown where the splinters of glass do not quite meet.  You can just imagine all the variants that must have been sketched and modelled for this. The geometry would not allow them to come to a neat point, which would have been banal anyway.  Plus there was originally an eco-feature planned up here, in the many levels above the viewing galleries: a large ‘radiator’ fanned by the winds of altitude, intended to provide a less power-hungry form of cooling. An open top was necessary for this to work. But in what amounted to a decade of design and revision, more conventional basement chillers with intermediate cooling towers became steadily more efficient, to the point that it would have actually have used more energy to pump water all the way up to the ‘radiator’ on top, which was duly abandoned. Nonetheless this topmost spire was built, now for purely aesthetic reasons: there is nothing much on levels 75 to 87 apart from a mysterious ‘meditation room’ on 78, though stairs go right the way up to a platform inside the jagged tops of the shards, surely the insider’s destination of choice. 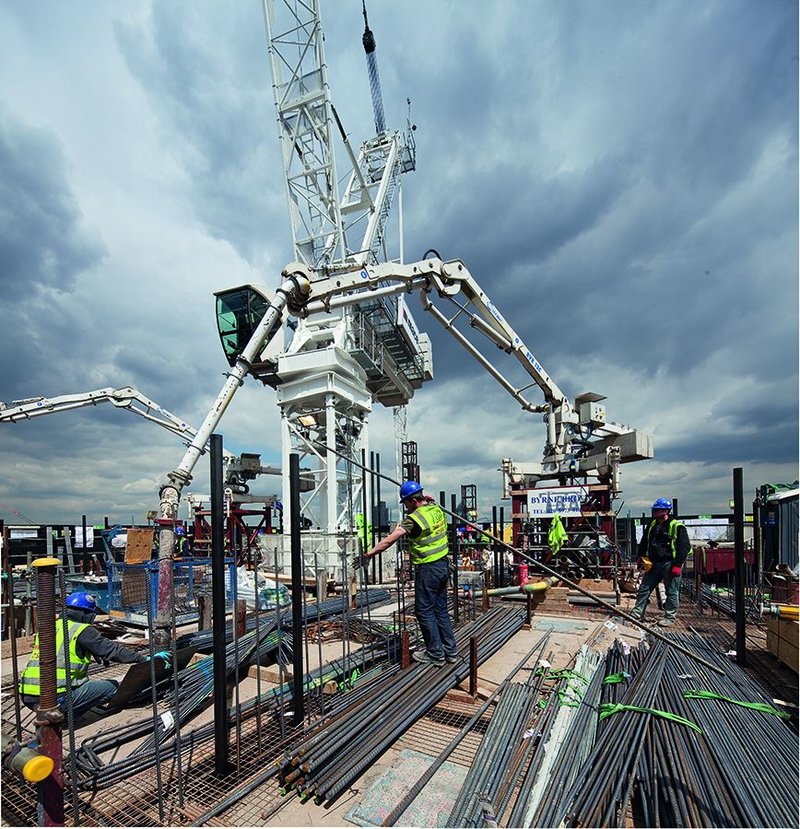 The hollow crown has attracted various descriptions: for me it resembles a giant cake-icing nozzle, for others a broken pencil that has lost its lead, others still see a Native American tepee.  Architect Nigel Coates, always one for the narrative possibilities of buildings, remarked in a Twitter conversation: ‘For me the best bit is the splintered top implying the whole construction is a hollow vessel.’   Harsh, Nigel. It also suggests that the facades of the building can readily be peeled away, which runs counter to the financial sector’s usual desire for the image of solidity.  However, the need for stout steel frames to support the tops of the shards reassures on that score, even as it  diminishes the design intention for a building that visually dematerialises at height.

Project architect William Matthews describes the Shard as ‘two towers stacked one on top of the other’.   The office floors on the lower levels (4 to 28), restaurant floors and the public spaces of the hotel (to level 40) are of steel-framed/composite floor construction (see ‘Slab Happy’, RIBAJ, November 2010). From there up to level 69 (comprising hotel bedrooms, spa, and apartments) you get a post-tensioned concrete frame and floors.  This section acts as a giant damper, the weight in the sky serving to reduce and slow the sway at the top (a metre of travel, half a metre each way). Finally, the viewing galleries and ‘spire’ (the tall cap piece on the building, rising to the equivalent of 90 floors) form an all-steel prefabricated structure, so you could argue that the Shard is actually an amalgam of three towers. The concrete core, acting as a vertical cantilever to stiffen the building, stops at level 72. Column spacings also vary to reflect the different uses, the widest spans being on the office floors.  Most of the building’s users will need to take two sets of lifts to get to the higher reaches, interchanging for instance at the restaurant level on floors 31-33.  There are exceptions, such as the lift to the viewing gallery, and the one to the block of apartments in the sky, some of which are duplexes. 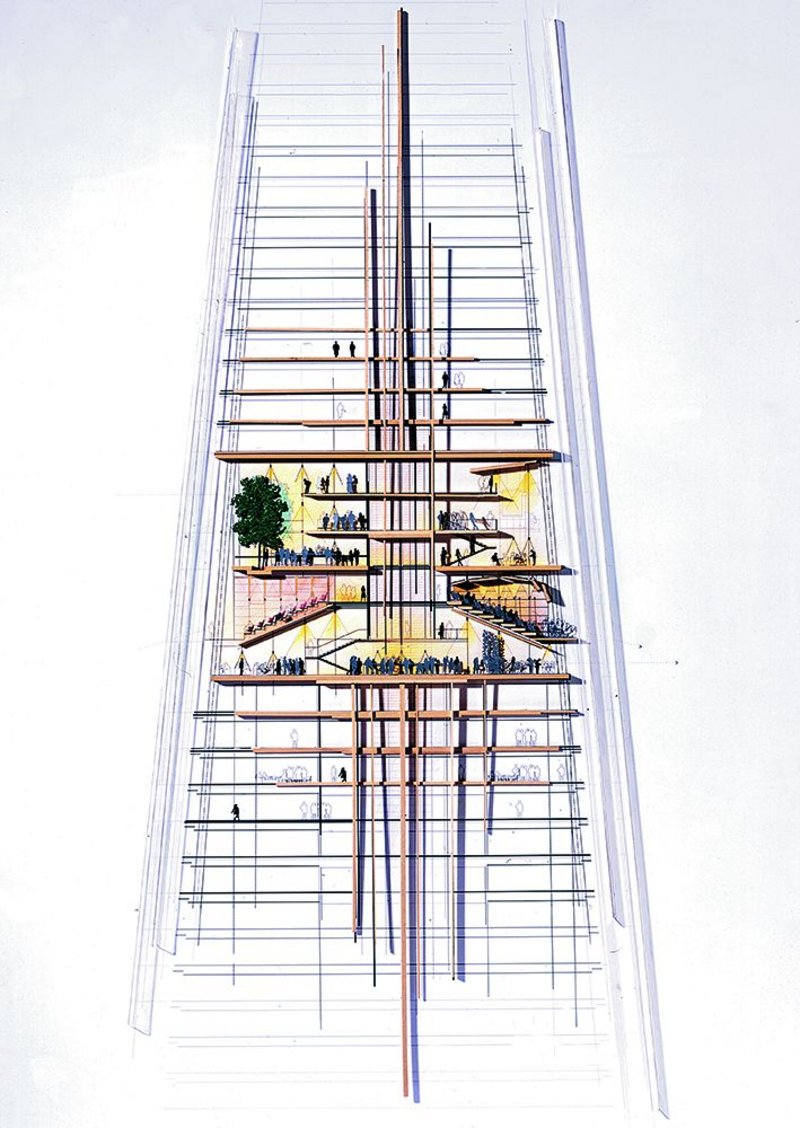 ‘Its publicists claim impressive low-energy credentials, not least making the startling assertion that 95% of its construction materials are recycled, including 20% of all the steelwork’

Although the Shard has been accused – not least by Ken Shuttleworth of architect Make – of being a throwback energy-guzzler, doomed to premature obsolescence, its publicists claim impressive low-energy credentials, not least making the startling assertion that 95% of its construction materials are recycled, including 20% of all the steelwork. There is also a big (740m2) photovoltaic array helping to reduce power consumption, and an efficient combined heat and power (CHP) plant.  But while the Shard might well have considerably outperformed regulations when designed, and was able to upgrade its technology during its long gestation,  it would be interesting to see how it would perform if proposed today, 12 years on. Even with a ventilated double-skin facade incorporating solar-sensitive blinds, a facade comprising 56,000 m2 of low-iron ultra-clear glass (no tinting, fritting or reflective coating, though there is a clear anti-infra-red finish) is audacious. But as Piano points out, if you put in loads of solar shading of whatever kind, you find that on ordinary dull days people have to turn the lights on. Daylighting, adroitly handled, saves energy. The Shard is not yet in use, so it will be some time before we know how well this strategy has succeeded. 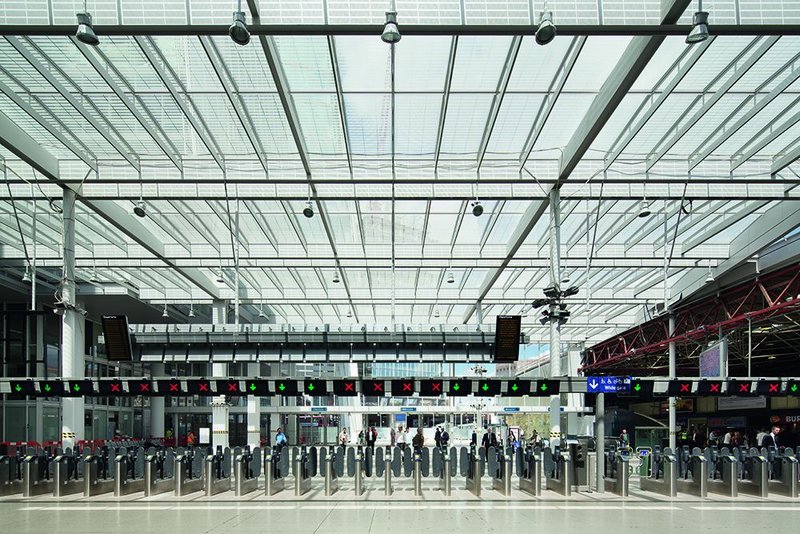 As a wholly speculative venture, largely funded by Qatari money, the Shard cannot be regarded as a necessary building in a civic sense (though the remaking of the London Bridge station concourse is a benefit to the public).  Of course the City of London always claims it needs more and better floorspace so the effect of building what the developers call ‘London Bridge Quarter’ is effectively to expand the City influence south of the river. This accelerates a gentrifying process that has been going on anyway for some years, stimulated by the arrival of nearby Tate Modern in 2000 and by the continuing regeneration efforts of the London Borough of Southwark.

But never mind the provenance: it’s built, it’s there. Does it work?  Elements of the Shard may not be perfect. Aesthetically views from some angles are better than others.  It is undeniably an enclave of wealth, and the viewing gallery prices are steep at £25. But it is a convincing attempt at a mixed-use tower, not just another office block, with a public element, plugged into a public transport interchange. And for me, on the skyline, it does the business. It is by no means cynical. Yes, it does have a soul.