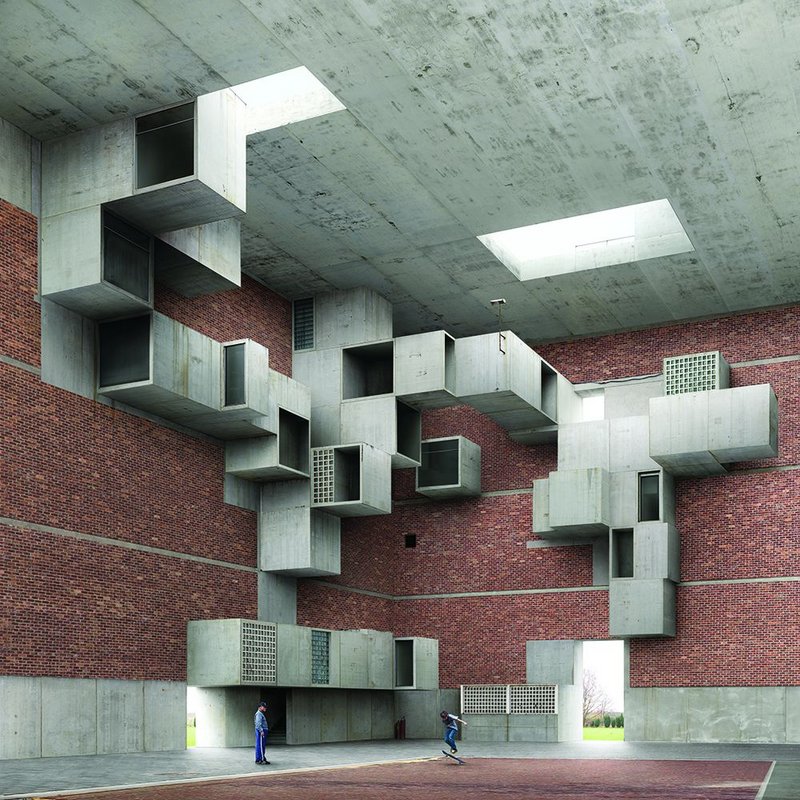 Filip Dujardin first caught our eye with his photo of a development in front of an infamous Antwerp high-rise that was so well-framed front-on, we were convinced the tower had been digitally manipulated. Not the case. ‘When shooting real buildings I never use Photoshop,’ he assured us, ‘but I’m flattered you felt it strange enough to think so’. That said, the flip side of his output is ‘Fictions’.

Dujardin studied History of Art in Ghent, specialising in the work of inter-war modernist Jan-Albert de Bondt. But as director of the city’s Royal Academy during the German Occupation, de Bondt was shunned as a collaborator after the war and never worked again. Dujardin’s curiosity seems to stem from the fact that, like him, de Bondt couldn’t practise – he admits he is ‘a frustrated architect’.

So he makes up his architecture. Using photographs of bits of Ghent buildings and 3D Sketch-Up, Dujardin creates his own anonymous places, that at first appear to be real, but then slip into fantasy. This is a rare portrayal of an internal space. ‘You don’t know if you’re inside or out: there’s holes in the roof, and the function of the concrete cubes isn’t clear,’ he explains. ‘I started doing this because not every project I shot thrilled me and I wanted to explore architecture my own way’. His comment could be seen as an indictment of the profession – or its saviour: a desire to constantly ‘look for the limits of the possible.’