With the award of this year’s Royal Gold Medal, Neave Brown’s legacy of how to design real social housing, from five homes to city scale, wins timely recognition

This isn’t the first time I’ve met Neave Brown. Three years ago, I was playing a ball game with Joe and Luca some kids of friends who live at his 1977 Dunboyne Rd flats, where he also lives. It involved throwing a ball up and down from one of the access stairs. After a while, I noticed an old gentleman standing nearby, watching the game with an engaged, wry smile. When I asked if we were bothering him he replied ‘not at all’, and asked us to keep playing. It turns out that was Neave.

Eighty-eight years old now, seated in his easy chair, still as bright-eyed despite ill health, Brown confesses he’s  ‘dumbfounded’ to have been awarded the 2018 RIBA Gold Medal.  Fifty years ago he, and others including Peter Tábori, Gordon Benson, Alan Forsyth, Ted Cullinan, Bill Forrest and John Green were assembled under Camden Council chief architect Sydney Cook to propose an alternative to the high-rise ‘Ville Radieuse’ thinking that saw council house tower blocks growing on London’s cleared bomb sites. The result was a mini golden age of pioneering modernist social housing that flourished in north London from 1965-1973.

Theirs was similarly high density proposition, but low-level modernist in aesthetic, with an Aalto-like humanism and consideration of context – all fuelled by post-war Keynesian thinking and the welfare state. ‘Created for that period after World War II, we hoped we were part of a new, evolving approach to housing,’ Neave tells me wistfully. ‘Of course Thatcher brought an end to it all. Years after I thought it would be seen as a historic episode that came and went and maybe viewed with curiosity by someone in the future. I never imagined the ideas would have ongoing relevance.’

But if his ideas for social housing remained beneath the surface, he feels it took the Grenfell Tower disaster to make them prescient again. ‘The fire is galvanising housing issues,’ he says of the soul searching that’s been precipitated in its wake. ‘We could see at the time they were built that it wasn’t just about the segregation of society’s poorest but that the plans for these blocks, squeezing cores to a single lift and stair, were a disaster waiting to happen.’ By contrast, the likes of Brown’s 518-home Alexandra Road, and Hodgkinson’s Brunswick Estate, found joy in varying housing  types, using stepped sections and spatial standards enshrined in Parker Morris’ game changing  1967 Homes for Today and Tomorrow. Winscombe St, the five homes Brown designed with a loan from Camden Council for his housing association in 1963, distilled the report’s thinking into a considered exercise in how modern families might reimagine occupying space. This small but perfectly formed work, which caught the attention of Sydney Cook, ultimately won Brown Alexandra Road, designed 1967-69. Historian Mark Swenarton, author of Cook’s Camden, calls it ‘the most celebrated housing scheme built in Britain in the past half century’.

Quite where his egalitarian social housing ideas hail from is a mystery, even to Neave. Born in Utica, New York, in 1929 to an American mother and British father, Brown paints a picture of a youth spent in unconsidered, relative affluence in upmarket Bronxville, followed by three years in England at Marlborough College. But self-awareness dawned on him here in those later teen years. ‘I was just called ‘the yank’ at school’, Brown recalls; but it seems a badge he wore with pride. ‘I was a young American and had no understanding of the class system. Everything at school was authoritarian in nature, from the head-master down to appointed prefects; a social pecking order I simply couldn’t relate to’. But he found himself inspired by his young teachers, all  brimming with new ideas in the immediate aftermath of the war; one ‘even giving me a copy of Karl Marx’s Communist Manifesto to read’. Perhaps it was this radical text, as much as old boy and AA alumnus Bill Howell, that had him switch from reading English at Oxford to the AA in 1950; ‘the only modernist school in Europe run by left wing thinkers who had fought in the war and who wanted to change the world’.

By graduation his ideas were already fully formed. ‘We were designing housing,’ says Brown, stressing the last word, ‘not social housing; homes for a mixed, developing, dynamic community.’ This was laid out in his 1967 manifesto ‘The Form of Housing’; and it wasn’t about theory but practicality. Brown points from his seat out past the large, sliding black timber doors to his own balcony on the Dunboyne estate. ‘While we were being inventive with new forms, it was all designed with thought and care. Detailing was simple. Fencing was nailed together, uneven, to avoid jointing, we used cheap galvanised mesh, fair-faced blockwork. It was all cheap and cheerful. We came in on jobs at 25-30% less than the QS was estimating’, he tells me. It made cost overruns that later befell the more ambitious Alexandra Road hard to bear but not inexplicable.

Completed 1978, the heroic 400m long housing scheme running alongside the west coast mainline became a victim of circumstance, constructed in the biggest UK recession since the 1930s. And with a three-day week and budget cuts came new social thinking about tenant liaison and giving people what they thought they wanted. In the ensuing public inquiry looking into cost overruns taking it from £6m in 1971 to £20m in 1978, Brown says he was accused of bad planning decisions, inability to project manage and resource and design incompetence. He became a scapegoat in an enquiry that was a battleground for partisan council politics in a wider climate of a central government cost-cutting and economic downturn. In the final report Brown was fully exonerated but the damage was done. ‘After 1978, it was effectively the end of my career in England,’ he states, not without a tinge of bitterness, ‘No-one’s employing an architect tainted by a public enquiry, whatever the outcome.’

Luckily, on the continent, people saw his work differently. Stuck with exhibition design here, his ideas carried on developing in Eindhoven with his high density mixed community Medina housing (1993-2002), a sublimation of all his formal ideas about urban living. It might be, as Mark Swenarton terms it, ‘his final master work’, but for Brown, it’s more than that; it represents the kernel of an idea that might facilitate the renaissance of a new, state-funded social housing programme. ‘In Holland, social housing is publicly financed; from concept to consultation, design to construction, occupation to maintenance. It’s all factored in, so that when the design life of the development is up, the increased equity can finance the next tranche of social housing. It’s a model we need to adopt here.’

But recognition has finally come at home. Perhaps it’s his suture, delicately stitched through time, linking his modern forms with those of the past, that explains why he’s the only living architect to have had all of his buildings listed; one based, he says, ‘on London’s Georgian squares, with housing about them, a public route through it and gardens in the middle.’ But the influences are wider; Corb and Aalto yes, but Empiricism and classical Japanese architecture too. ‘People think architects think in a linear way, but they don’t’, he adds. ‘They can be influenced by ancient buildings, the 18th century or a thing they saw the day before yesterday – they cherry pick from history.’ Those touches with a familiar past account for why his buildings are so loved by those living in them.

With the award there’s a new-found serenity and purpose from someone who was hung out to dry and never going to work again. Prophets never welcome in their home town? That may have been the case, but the man responsible for turning social housing thinking on its head, now has one of the world’s major architectural awards sitting round his neck. And time hasn’t dampened either his zeal or relevance. ‘For years we’ve crammed the underprivileged into unsuitable homes that were only bringing profit to developers and contractors – which then become a liability for the state to deal with – all done with eyes wide open,’ he says, his own aflame. ‘Can you imagine anything more socially corrosive than that?’ 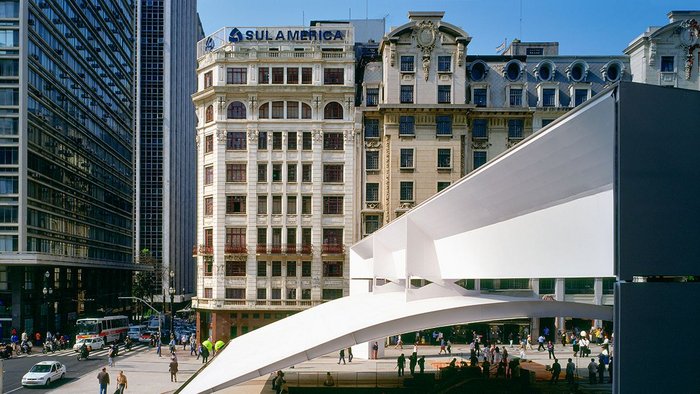