Mussolini had grand ideas for the buildings of the ‘Third Rome’, but many designs were left unbuilt

Mussolini referred to the capital city of fascist Italy as the 'Third Rome', heir to the universal legacy of the Roman Empire and the Catholic Church; and just as they had each done in turn, he too intended to suitably enrich and embellish its cityscape. A range of transformative projects was planned throughout the 1920s and 1930s, most of which were commissioned through open design competitions. Unlike Nazi Germany, fascist Italy never had an officially sanctioned style for art or architecture. Instead there were several camps and outlying individuals with various stylistic leanings who vied for supremacy, or at least attention, with various public design competitions providing a prominent forum for their mutual contestation. The most prestigious projects were those conceived for the capital, often attracting the strongest participants, the most interesting proposals, and a commensurate volume of reciprocal bile. Aside from being the most sought after, the Roman projects initiated by Mussolini’s regime also happened to be the most likely to stall and never materialise, Rome throwing up its usual host of problems from ruins uncovered while digging foundations to international opprobrium at the location or style of proposed new buildings, as well as constantly shifting priorities and over-stretched finances. Even when they did get off the ground, designs were more often than not tampered with by the regime’s increasingly influential de-facto architect in chief Marcello Piacentini, who was open to most architectures and architects, so long as they classicised themselves to a degree in a garb of travertine and columns. This led to compromises and strange hybrids like Adalberto Libera’s half rationalist, half classical Palazzo de Congressi in EUR. Because of these contingencies, much of the best architecture from the period can be found among the immense overproduction of unrealised paper projects that together cover every district of Rome, and all its most important sites, many times over, in multiple conflicting stylistic visions. Here is a small selection. 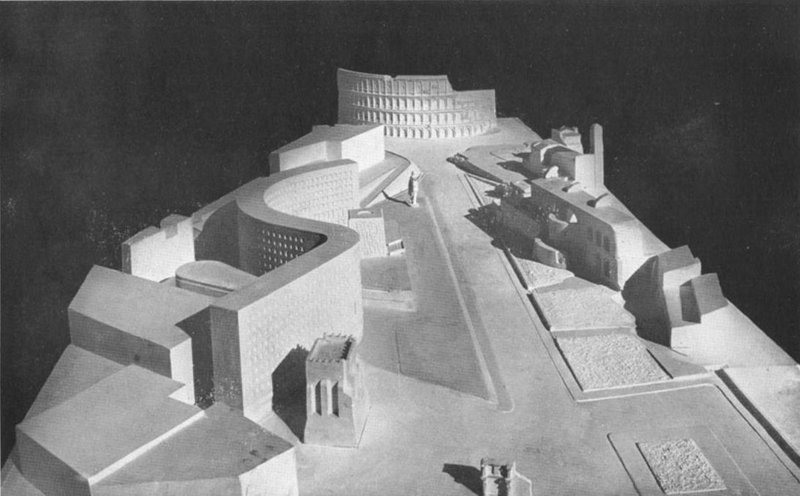 On the new Via dell’Impero, which had just been carved through the Imperial Forums – facing the Basilica of Maxentius, with the Colosseum to one side and the Monument to Vittorio Emanuele II to the other – the Palazzo del Littorio was to be the grandest fascist building of the millennial city – a political, administrative and spiritual hub of Fascism at its very heart. The full kaleidoscope of architectural approaches present in the period proudly proclaimed themselves through the entries for the first stage of this competition (1934), ranging from buildings that looked like steam boats to vast impersonal rationalist grids, from Egyptian wedding cakes to Gropius-like dynamic compositions of slabs. The project was moved in the second stage to Aventino, a more peripheral and less contentious site, and the winning proposal was eventually built to the north of the city in the Foro Mussolini – a much less problematic site on virgin territory, of the kind where almost all the realised fascist projects in the end were constructed. Ridolfi’s proposal is an excellent example of his own particular fusion of the contrasting interests in this period. He brings together a dynamic rationalist articulation of programmatic elements with a classically ordered poise present in all the elevations and materials, brought together within his own distinctly curvilinear sensibility. All these ideas can be experienced at a smaller scale in his brilliant Post Office on Piazza Bologna from 1935. 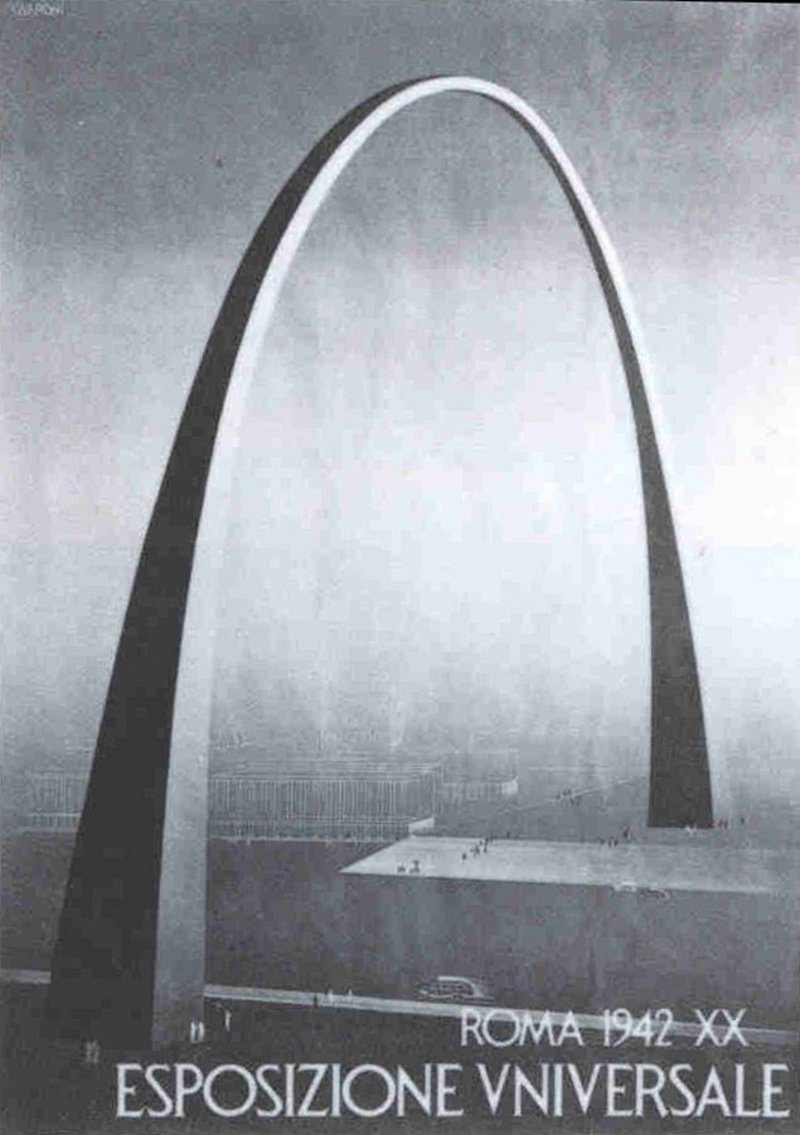 Rome was awarded the 1941 world fair, which was subsequently moved to 1942 to coincide with the twentieth anniversary of the Fascist seizure of power. For this important occasion the Fascist authorities decided to build an entirely new, permanent quarter in the southern periphery of Rome (E42/EUR). This was meant to be the Fascist ideal city, constructed from scratch, away from the awe-inspiring shadow of the historic city and yet linked symbolically to it, simulating the entirety of Fascist utopia and myth. What came to be the defining image of the district, its monumental arch that was meant to crown the entire quarter, was not originally envisaged in Marcello Piacentini's master-plan; instead it evolved as a proposal bandied about by two groups of engineers who argued about authorship, optimal dimensions and materials, as well as construction techniques. Enthusiastically approved by Mussolini, the idea was picked up by Adalberto Libera, who transformed it into a characteristically deft union of a visionary, geometrically sweeping modernity and a clear archetypical precedent from the legacy of classical and renaissance Rome. At one point intended to span three hundred metres and rising to over two hundred, the project eventually fell afoul of history and the second world war, with the idea having to wait another twenty years before it was picked up (in catenary-arch rather than radial form) by Eero Saarinen, with his St Louis arch of 1965. 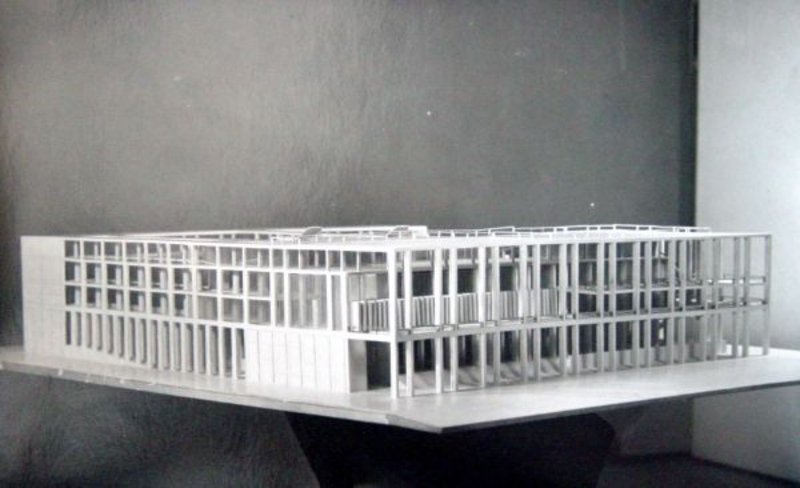 In his final plan for the new 'exhibition City' that was designed to host the 1942 world fair, the project's chief architect, Marcello Piacentini, opted for a combination of direct commissions and competitions for the quarter's main buildings. The competition for the Palazzo dei Congressi e Ricevimenti was one of four that were announced in January 1937 – and arguably the one that attracted the highest quality of submissions. The Terragni-Lingeri-Cattaneo design came second in the final stage, eventually losing out to Adalberto Libera’s proposal. The three architects had sought to capture and express the spiritual essence of a universal classical spirit, rendered through a rationalist vocabulary of idealised abstraction and elemental harmony. The modular composition was highly praised by the then editor of Casabella, Giuseppe Pagano, who deplored the 'compromises' and 'mediocrity' of all the winning projects across the various competitions held for the quarter. The outcome was a serious blow to Giuseppe Terragni's efforts to realise a building in Rome. After his defeat at the second stage of the competition for the Palazzo del Littorio and the abandonment of his fascinating proposal for the Danteum building in the same location along the Via dell'Impero, this was his last chance to leave an architectural legacy in the Italian capital - thwarted in the end by Piacentini's preference for a more uniform monumental style, based on ‘romanità’, across the entire exhibition quarter. 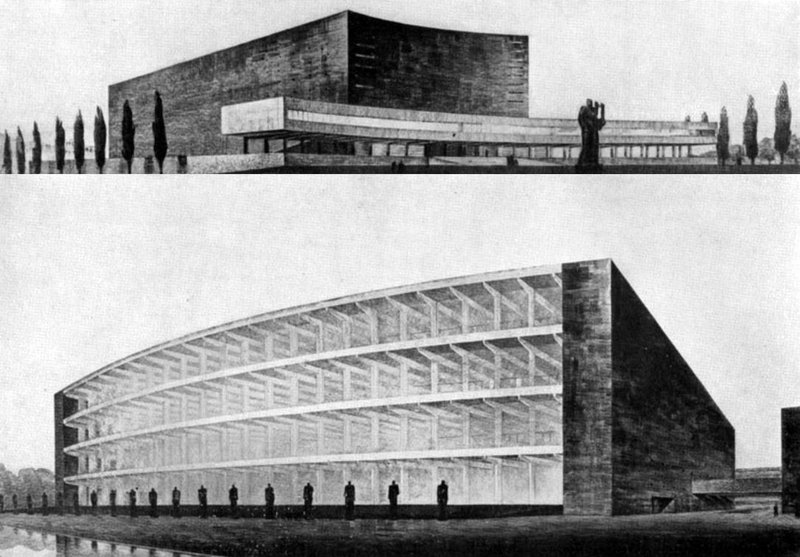 This unrealised competition was for the replacement of the city’s concert hall which, having been built directly on top of the Mausoleum of Augustus, was demolished to satisfy Mussolini's directives to 'liberate' Rome’s imperial monuments from their accumulated centuries of 'parasitic' architectural clutter. Placed on axis at the eastern end of the Circus Maximus, the building would have sat between the Baths of Caracalla and the Imperial palace complex on the Palatine Hill, in direct dialogue across the open field of the Circus with the imposing ruins of the Emperor’s high-level viewing gallery. Produced by the same duo that had recently finished a bold new post office building in the Aventino quarter, this proposal monumentally combined a modernising abstract clarity, with an imposing sense of classical grandeur that paid tribute to the site's strong associations with the myth of romanità. The project took the northern radius of the Circus as the organising geometry for its curved facades, which started with a sweeping single-story range on piloti, perched above steps down to the ancient site. A vast masonry monolith, a pure rationalist ruin of sorts, would rise up behind and radially extend away to the rear, eventually opening up at the back to reveal a vast, glazed, four-level (same as the Colosseum) colonnade of concrete posts and beams that recede towards a bright interior, the antithesis of the dark mass to the sides. 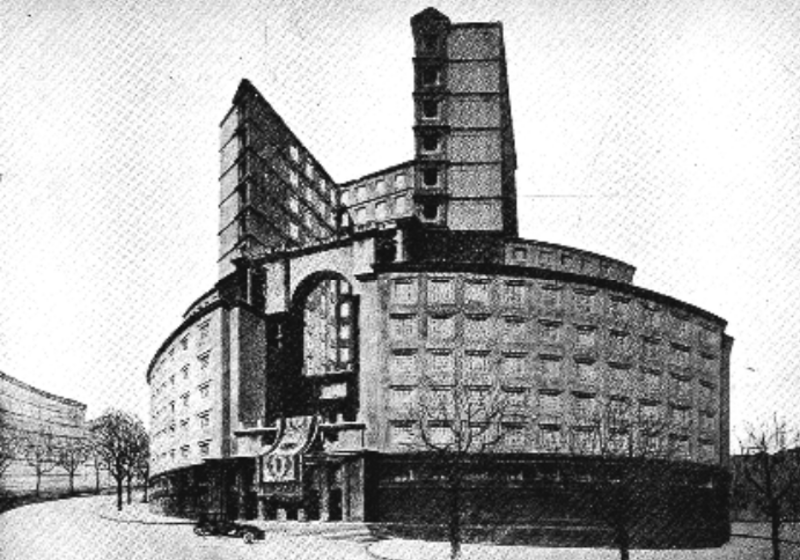 The Palace (Ministry) of the Corporations was the first major official architectural project executed by the fascist regime in the centre of Rome, occupying an irregularly shaped plot of land that runs along the curve of Via Veneto. The importance of the project echoed the significance of the fascist ideological experiment of 'corporatism'. This was an innovative socio-economic and political reorganisation of society based on a guild-like division of the professions, an alternative to both liberalism and socialism. A high-profile competition was announced for the ministry building in 1927, which was won by a group of architects led by Pietro Aschieri. An early adherent to the Italian Movement of Rationalist Architecture (MIAR), Aschieri's work in the 1920s displayed an eclecticism derived from his experimentation with academic traditions, Viennese secessionist influences, expressionism and futurism. In his design for the Palace of the Corporations, Aschieri opted for an imposing geometric composition, consisting of a circular base structure with a superimposed vertical complex, together producing a modular skyscraper effect. Aschieri was subsequently sidetracked in favour of the partnership between Marcello Piacentini (already in charge of the urban re-development of the entire zone) and Giuseppe Vaccaro, who executed the more classically-inspired current building on Via Veneto in the early 1930s. 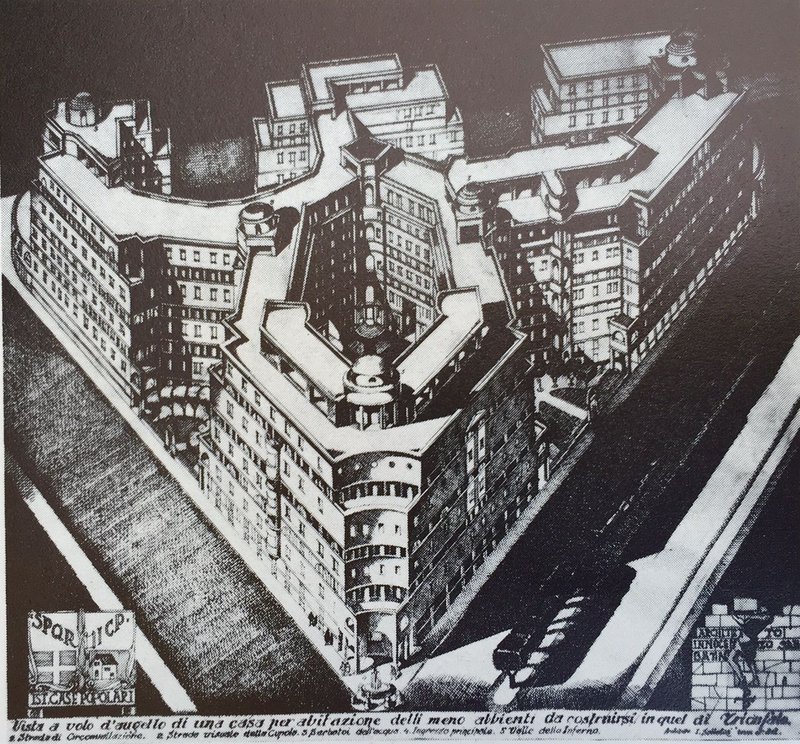 Innocenzo Sabbatini led the Technical Office of the Institute of Popular Housing (IACP) in Rome during the 1920s and designed a series of houses and 'mega-blocks' that appeared at a frenetic pace in many locations across Rome and in new planned suburbs. He steered the IACP through an era of experimental creative synthesis of stylistic influences and delivered a significant number of high-quality social housing projects across the capital. Having contributed to earlier housing projects in the Trionfale quarter that gradually emerged to the north-western of the Vatican City, in 1929-30 Sabbatini designed the plan for a new residential complex called 'Nuovo Trionfale'. The design took stock from his experiments with the various 'suburban hostels' that he had executed in the Roman suburb of Garbatella (1927-28), combining multiple mega-blocks into a series of architectonic episodes that nevertheless generated a continuous, integrated, and harmonious urban effect. The continuous interplay between open and closed spaces, as well as the visual autonomy of multiple perspectives, marked the 'Nuovo Trionfale' project as a felicitous moment of maturity and self-confidence for Sabbatini's architectural vision – and a fitting swansong for his IACP career, which ended with his resignation in 1931 and the cancellation of this project.

Situated in the east of the historic city, directly opposite the ruins of imposing Baths of Diocletian, Rome's main railway station (Termini) was constructed in the 1860s. The original Beaux Arts-style building was demolished in the 1937 in anticipation of a new, bigger and modern structure that would function as the main gateway during the 1942 world fair. The fascist authorities commissioned Angiolo Mazzoni to design a new complex of gargantuan proportions, demanding that the building perform as a terminus, but that it also be suitably monumental in conception. Mazzoni, already a proven designer of railway stations (Siena, Trento, Venice) and post offices (Sabaudia, Palermo) in the 1930s, delivered a first design with strong rationalist and even futurist influences, where the elevated glass facade dominated the exaggerated horizontal exterior. The design was rejected by Piacentini, however, who demanded a solution in line with the city's millennial architectural traditions of romanità. Mazzoni obliged, and his final 1938 plan provided a far more classicist structure, with rhythmic arches running along the two sides (realised) and a classicist colonnade on the front (not realised). Construction was interrupted by the Second World War; it resumed in 1947 but only after a new competition for the facade and main concourse. Discredited, Mazzoni was excluded from the competition and left for Colombia shortly afterwards.