After 40 years as a buildings pathologist, consultancy director and former SPAB trustee Michael Parrett (below left with RICS president Martin Bruhl) has been honoured with an ‘eminent fellowship’ of the RICS. We ask him about the damp and the dead 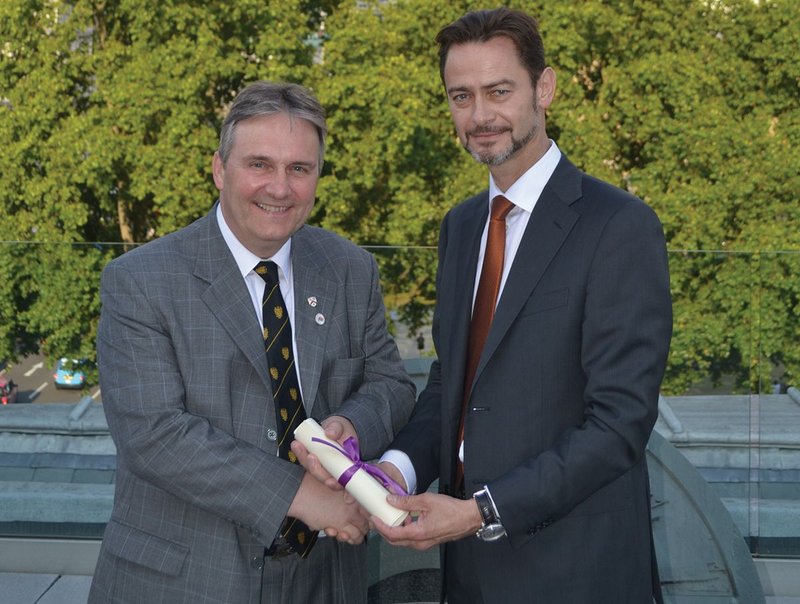 I suppose it is in way, although in America I’d officially be called a ‘forensic investigator’. I think it is best summed up by RICS’ Professor Malcolm Hollis, who wrote the equivalent of the surveyor’s bible. He said building surveying was an art but building failure a science. As pathologists we have to go from a symptom to a cause to a source to get to the root of the problem.

Architects should be creating structures that are alive, beautiful and robust and I only get involved when that intention goes awry. When a building’s in trouble it’s my job to work out why – and who or what is responsible for it. I’d like to think, like an architect, I’m also speaking up for a building and giving it a voice.

You were involved in the BBC2 show ‘Raising the roof?’

Yes, it helped dispel a few myths about rising damp, which most architects would put down to a breached or absent horizontal damp proof course. But there’s no empirical evidence to support that. It’s going to be something like blocked cavity walls, raised external ground levels, leaking water mains or blocked air vents under suspended floors. And some commercial firms have a vested interest in pumping stuff into walls that doesn’t actually deal with the issue.

What’s the scariest pathology incident you’ve been called to?

I went to a wharf building refurb where myriad design and build issues led to spectacular failures. It had tiny openings to the Thames instead of picture windows, single glazed rooflights with terrible condensation and interlocking gutters with no rainwater outlets. It required a huge, costly gantry on one side just to clean the gutters and windows – it was a horror story.

With airtightness a key component for reducing heat loss, do you think sealed buildings are contributing to poor internal environments?

Not with off-site passive house construction, but the problem’s fraught in retrofitting where buildings are completely sealed without adequate venting. I work in social housing and mould is on the increase: I deal with over 300 ‘prejudicial to health’ claims a year. We need an interdisciplinary design approach to looking at the consequences of airtightness in existing buildings.

When you visit someone’s house do you find yourself treating it like a crime scene?

Yes, it can be like that! I’m staying in a hotel at present which reminds me of SPAB founder William Morris’ advice that regular maintenance is the key to staving off decay. I stay in lots of hotels and some can be scary. I always have a camera with me to catalogue the horrors!