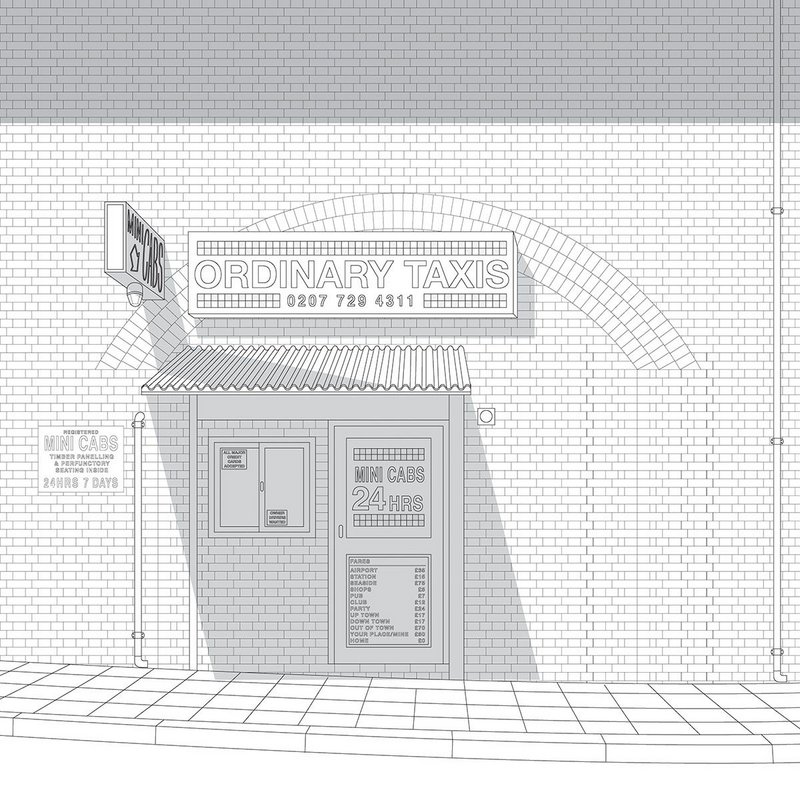 Here’s a scene with which many of us are familiar. You emerge late at night/early in the morning from a party. You’ve missed the last tube/train and waiting for the night bus could take hours. So you head hopefully towards the nearest high street and there, in the distance, is the flashing orange light of the mini-cab office, a beacon signifying salvation or, at least, a warm car and a relatively painless journey home.

A motley collection of people linger below the light. Some look desperate to get home, pacing the pavement impatiently waiting for their cab to turn up. Others are engaged in earnest discussions about where to go next. There are the drivers too, leaning up against their executive saloons, traffic light air fresheners hanging from the rear view mirrors.

Inside is a small, harshly lit room with a tangible air of desperation about it. No one really wants to be in a mini-cab office, not the drivers, not the passengers and certainly not the manager behind the glass screen in charge of the whole operation. This person’s job is to match cars with destinations and interpret crackly radio messages from drivers negotiating complex transactions with inebriated customers. They also get to calculate the fare, the result of arcane mathematics involving a number of variables including the lateness of the hour, the number of available drivers and the mental state of the people needing the cab.

Although they often occupy shop units, there is nothing on display and very little effort is made to entice the customer. You either desperately need a mini-cab or you don’t need one at all. So the word Taxi appears in large letters on the glass shop front along with phone numbers and (largely made-up) fare prices. The colour scheme tends to involve a lot of black and yellow, which along with the liberal use of chequerboard patterns, suggests the faint whiff of glamour of the New York City taxi.

The office itself is utilitarian and basic. There might be some seats, usually pretty perfunctory affairs not offering much in the way of comfort. Despite this, at least one person will be asleep on them. The title ‘office’ is an interesting one too. They are waiting rooms really and even then most of the waiting is done outside. So investment in décor ranks pretty low on the list of priorities. Unpainted timber panelling is popular; presumably as a cheap way to provide a wall cladding that can absorb a fair amount of abuse. There might be a large map of the city stuck to the wall too, often divided into a grid of squares with some notional connection to the cost of the cab. For decoration there might be a potted plant or a framed picture of something random like an alpine stream or a tropical island. And that, apart from the inevitable no-smoking signs and warnings about anti-social behaviour, is it. The atmosphere of a mini-cab office is desultory at best, mildly threatening at worst.

Sometimes mini-cab offices occupy more obscure locations, found up a winding stair or down a dingy corridor. They lurk above cafés and shops, accessed via a side door, although at night they take over the street frontage as well. In fact they pop up wherever there are people desperate to get home. So they can be found tucked behind suburban train stations or underneath railway arches. Here the office approximates some kind of minimalist installation, a glass window inserted into a wall, backlit signs stuck unceremoniously across the brickwork arches.

Ultimately, mini-cab offices are fairly transient, the sort of uses that are the first to go when an area moves upmarket and the artisan bakers start flocking in. In the age of Uber, they are an endangered species. Why trudge to find a taxi when one can be summoned without even leaving the bar? But Uber doesn’t operate nationwide and its hegemony is not yet complete. So over the next couple of weeks especially, a large number of us will still make that high-street pilgrimage, drawn by the succour of the flashing beacon. The mini-cab office will remain a feature of our high streets for a while yet, an odd amalgam of shop, office and waiting room offering a vital service to lost souls of the night everywhere.

The place to bowl a maiden over