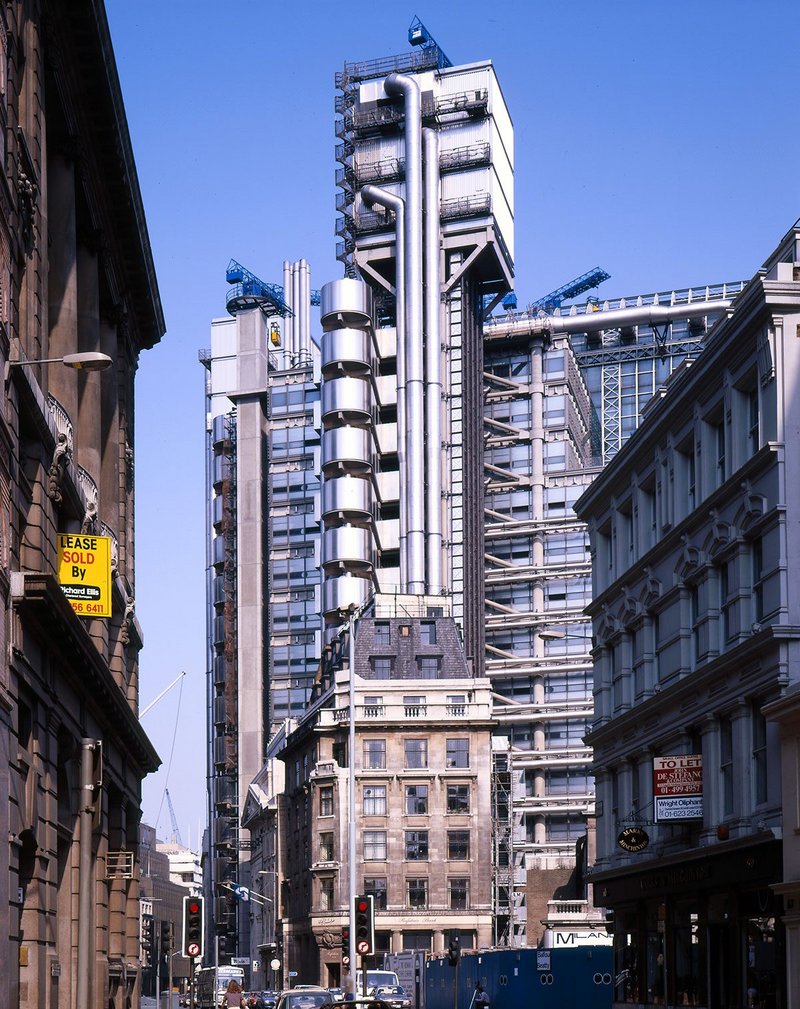 Lloyds Building in the City of London. Images of Lloyds by Alastair Hunter / RIBA Collections

Richard Rogers’ Lloyd’s building in the City of London is set for a major redesign of its main internal space.

The 1986 building is one of the seminal examples of the high-tech architectural style, its striking appearance partly because services such as ducts and lifts are on its outside walls.

It was grade I listed in 2011 and, at the time, was the youngest building to be given that level of protection. Historic England described it as ‘one of the key buildings of the modern epoch’.

The insurance company now says it wants to overhaul the three-storey underwriting room, partly in response to changing working patterns resulting from the pandemic.

However, the Twentieth Century Society has warned of potentially damaging alterations, saying its listed status might not be enough to protect it.

Lloyd’s has mentioned the possibility of adding a high-end restaurant to the building, and Croft said that if this required a separate entrance route, it would need to be thought through especially carefully.

Earlier this year, the insurance company carried out a major consultation over the future of the underwriting room ‘to gather insights and ideas about the future requirements for spaces and services our marketplace needs'. It described the proposed revamp as ‘a once-in-a-generation opportunity’.

And, according to the Architects’ Journal, it played down rumours that it had already begun an invited competition to find a design team for the project, saying that, while it had had ‘initial discussions with several architects’, it had no plans to engage any of them ‘until we have fully explored all the options available to us’.

In 2008, when the building’s listing was first on the cards, Marcus Lee, who was site architect for the project, wrote that he had helped design the building to be flexible, adding: 'To list it is philosophically wrong as it will impose constraints on change.’

Three years after its listing, the Sunday Times reported that Lloyd’s wanted to leave the building, unhappy with its functionality and maintenance costs, although Rogers himself was quick to dispute this.

A cross-laminated timber pavilion designed by Bell Phillips Architects has been hit by fire while under construction.

The community pavilion is part of Elephant Park, within Lendlease’s £2.3 billion regeneration of the Heygate Estate at Elephant and Castle in south London.

The fire broke out on the morning of Friday 6 August and was attended  by four fire engines, with firefighters swiftly bringing the blaze under control, assisted by a rainstorm.

The first floor of the pavilion was damaged and one member of the construction team was treated for injuries. Bell Phillips said it was ‘devastated’ to hear the news.

The blaze will add to debate on the safety of timber structures. Following the Grenfell Tower fire, legislation was brought in to ban the use of combustible materials – including timber – on the external walls of residential buildings above 18m tall. Last year, the government consulted on extending this ban to buildings above 11m.

However, many architects have argued that structural timber should be excluded from this ban. They claim it does not have the same risk as timber cladding and that timber can play a crucial role in decarbonising the construction industry.

In 2014, a fire destroyed a timber-framed science block designed by Fairhursts Design, which was under construction at the University of Nottingham.

At the time, former chief fire officer Ronnie King pointed out that timber-framed buildings were at their most vulnerable during construction as structures were exposed and safety features such as fire-resistant doors might not yet be in place.

David Chipperfield Architects is to scale back its plans for a concert hall in Edinburgh following a legal wrangle with the developer of a neighbouring shopping centre.

The practice won a competition to design the £75 million Dunard Centre in 2017. Its building comprised two auditoriums of 1,000 and 200 seats, and provided a home for the Scottish Chamber Orchestra.

It narrowly won planning permission in 2019, having split opinion between heritage groups. It was backed by Edinburgh organisation the Cockburn Association, while the Architectural Heritage Society of Scotland expressed concern that it would tower over 18th-century Dundas House, now a branch of the Royal Bank of Scotland.

The architect was asked to go back to the drawing board after a legal challenge from Nuveen Real Estate, developer of an 80,000m2 hotel and retail development – itself widely criticised – which objected to the concert hall’s height, scale and mass.

Chipperfield’s revised design is 7m shorter and no longer includes the 200-seat auditorium, while the size of the foyer has been reduced.

The new design will now be submitted to the council. If it is approved, construction is set to start next year with completion scheduled for 2025.

Mound proves a heap of trouble for council

The deputy leader of Westminster City Council has resigned over the shambles that is the Marble Arch Mound.

As reported earlier this month, the artificial hill, designed by Dutch architectural practice MVRDV, has been roundly ridiculed for its shoddy appearance, with both the architect and council conceding that it had opened too early.

The architect suggested it had been wrong-footed by July’s hot weather, fooled presumably by hearing too many self-deprecating remarks about English summers.

But if there’s one thing worse than a high-profile white elephant, it’s an overbudget high-profile white elephant. The mound had been expected to cost £3.3 million but this has nearly doubled to £6 million. (The initial publicised price tag of £2 million did not include the cost of operating the visitor attraction or dismantling it at the end of its brief six-month life.)

Nor will the project’s finances have been helped by the dropping of all admission charges to the mound. Initially, the council was charging £4.50 to climb the mound, but this was swiftly abandoned as its shortcomings became apparent. Londoners looking for low-cost entertainment this summer should note that it is now free to reach the summit of what has been described as a ‘slag heap’.

This has all caused extreme embarrassment to the Conservative council, given the party likes to boast about its lack of profligacy with council tax-payers’ money. Melvyn Caplan, the councillor who led the project, announced his resignation on Friday.

Council leader Rachael Robathan described the rocketing in cost as ‘totally unacceptable’, while defending its intentions, which were to reinvigorate area’s retail businesses, which have been hit hard by the pandemic and lockdowns.

She described the mound as a ‘small part of the council’s wider £150 million investment in the Oxford Street District’ and said she was confident that it would ultimately fulfil its brief of getting people back into the West End.