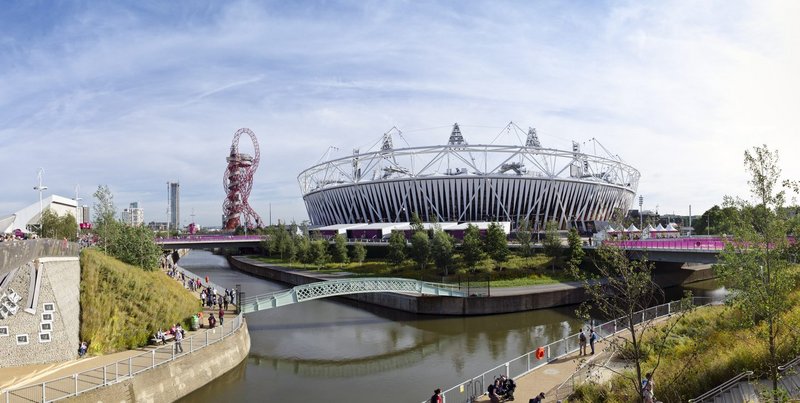 London’s Olympic Park is at risk of becoming a ‘derelict, costly disaster’, the London Assembly’s budget and performance committee has warned.

With countries spending billions on mounting Olympic Games, legacy is an important criterion when host cities are selected. Despite this, there are plenty of examples of facilities that have fallen into disuse and disrepair, most notoriously Athens 2004, while more recently, Rio 2016 has left a slew of abandoned venues, with its main stadium ravaged by theft and vandalism.

‘London 2012 was meant to be different,’ says the committee’s report, ‘and this was a lynchpin of the original bid.’

But it points to the high running costs of the Populous-designed London Stadium, which is leased to Premier League football club West Ham, but nevertheless costs Londoners £8 million a year to run.

It also highlights the spiralling costs of the East Bank – a waterside development of buildings that will include outposts for the Victoria & Albert Museum and Sadler’s Wells, designed by O’Donnell + Tuomey, and a building for the BBC and London College of Fashion, designed by Allies and Morrison. Costs on this scheme, it says, have increased by £151 million in the past year.

The committee concludes ‘there is now increasing risk that the London Legacy Development Corporation (LLDC), which is overseeing the site, will be unable to repay all of its anticipated £520 million of borrowing”.

Susan Hunt, who leads the Conservatives in the London Assembly, told New Civil Engineer that ‘Londoners should not be expected to keep pumping huge sums of money into a development that is not only dropping in value but doesn’t even begin to help address the capital’s crippling affordable housing issue’.

While these figures do give the impression of the redevelopment’s finances looking precarious, one does wonder if the people writing this report have actually visited the site, or simply spent their time fretting over balance sheets.

Granted, the proportion of affordable housing could have been higher, but to compare it with Athens or Rio seems ridiculous. Even without the East Bank development, the park is well used, attracting cyclists from as far away from Westminster.

West Ham’s tenancy of the London Stadium has seen crowds increase with its average attendances last season 44,000 – the third highest of any English club; while Zaha Hadid Architects’s aquatics centre has also proved a popular facility.

Hawkins\Brown’s transformation of the Olympic media centre into Here East has been open since 2016, providing a home to BT Sport and an east London base for UCL’s Bartlett School of Architecture. And construction is under way on the university’s 180,000m2 outpost, UCL East, designed by Stanton Williams and Lifschutz Davidson Sandilands,

The LLDC said it was disappointed by the report’s errors and lack of context, which failed to identify the indirect income being generated.

In the case of the London Stadium, for example, it argued that its hosting of the 2017 World Athletics alone had brought in more than £100 million of spend and that ‘independent reports showed the economic and social impact of East Bank … more than pays back the investment and will play a vital part in London’s Covid recovery.’

Lower pay for the same hours

Troubling news for the profession’s finances has emerged with the revelation that nearly half of all UK architects have taken a pay cut during the pandemic.

Building Design reports the results of a survey by recruitment agency Frame, which shows that 21% of architects had their salaries cut in tandem with a corresponding cut in hours – an unfortunate result of the drop in work during these uncertain times.

But it also revealed that a further 28% saw their salaries scythed while their working hours stayed the same. Now that’s just plain mean, isn’t it?

Some of this will be down to architects losing their jobs and then finding new ones that pay less. The survey showed that salary offers for new jobs had decreased by up to 20%.

The data shows that those most likely to be hit were working in London and architects with more than two years’ experience – who were, presumably, better paid in the first place.

Readers who feel they may have been a victim of this phenomenon are advised to seek employment at Foster + Partners, ideally becoming a partner as soon as possible. The UK’s largest practice reimbursed an earlier 20% pay cut when it turned out that Covid hadn’t led to the fall in work it feared; while its 254 partners received bonus payouts totalling more than £31 million.

There has been a flurry of activity from the Ministry of Housing Communities and Local Government, led by Robert Jenrick.

While the housing secretary may have gained most headlines for his pledge to stop statues being removed ‘at the behest of a baying mob’, he has also set out new standards for zero-carbon homes; announced plans to introduce a ‘right to regenerate’ underused local authority land; and set out plans for a new watchdog to ensure construction materials are safe.

The latter, says Jenrick is a response to evidence given at the Grenfell Tower Inquiry of ‘dishonest practice by some manufacturers  … including deliberate attempts to game the system and rig the results of safety tests’.

Last autumn, the inquiry heard that insulation manufacturers Kingspan and Celotex marketed products as safe for tall buildings when they knew they posed fire risks.

The watchdog will have the power to remove any product from the market if it presents a safety risk and to prosecute companies that flout product safety rules.

Architects have, unsurprisingly, welcomed the announcement. As well as preferring their buildings not to go up in flames, they will hope that it can also help placate the insurance industry. Since Grenfell, there has been a massive rise in professional indemnity insurance premiums. A stricter regulatory system could give insurers confidence that risk levels have reduced.

Nevertheless, many will be surprised there isn’t already a government body checking product safety. Wasn’t this supposed to be the job of the BRE and the British Board of Agrément?

Both organisations were privatised in the 90s, and subsequently relied on fees paid by product manufacturers to cover their running costs. At the time, Labour accused the government of rushing the BRE’s privatisation ‘for ideological reasons with scant regard to public interest’.

In November, Grenfell inquiry lawyer Sam Stein accused both organisations of failing to stand up to manufacturers when testing and certifying their products and instead reinforcing ‘the dangerous and dishonest culture within the industry’.

So while the new body is clearly necessary, it’s frustrating that this all might have been avoided were it not for an ideological zeal to remove as much as possible from the public sector.

Frustration may also be felt over the government’s latest announcement on the Future Homes Standard, which seeks to ensure that all new homes are ‘zero-carbon ready’ by 2025 – the term means housing will become zero-carbon as the electricity grid progresses its transition from fossil fuels to renewables.

It will ensure new homes produce 75-80% fewer carbon emissions than allowed under the current regulations.

Yet this could have been achieved a whole lot earlier had not George Osborne axed the zero-carbon homes policy when he was chancellor in 2015, following an election result that meant he no longer had to kowtow to tree-hugging Lib Dem coalition partners.

Speaking to BD, architect Seb Laan Lomas from the Architects Climate Action Network despaired that nowhere in the 114-page document was there any mention of embodied carbon – the emissions that result from a building’s construction rather than its day-to-day running.

This is despite embodied carbon being expected to account for almost 70% of a home’s whole-life carbon emissions – though it should be pointed out that, as day-to-day emissions are cut, embodied carbon will inevitably increase as a percentage of all emissions.

Meanwhile in the AJ, Steve Sawham of developer Kin expressed worry over the lack of emphasis on existing buildings, which he said needed to be retrofitted far more rapidly. He argued that the same investment in our current homes would achieve a lot more, in carbon terms, than tightening new building regulations further.

Jenrick’s third initiative in a busy week was announcing a new Right to Regenerate – a rule change that will allow underused public buildings to be sold and turned into homes.

But while the plans have been welcomed by camping groups such as the National Community Land Trust Network, former RIBA president Ben Derbyshire is more sceptical, warning that the policy could end up as ‘a bit of a horror story’.

On the face of it the proposals may seem like a community-focused initiative, he told BD, but he felt it most likely that land would end up in the hands of the private sector.

Private developers could then take advantage of permitted development rights which allow certain buildings to be converted into housing without having to go through the planning process, meaning there are few safeguards on their quality.

Tim Sloan at Levitate Architects, speaking to the AJ, wondered why the rules only applied to public land. ‘Why isn’t the government also going after the private developers and housebuilders allowing their assets to go to waste?’ he asked, concluding: ‘Ultimately this smacks of a Conservative-led land grab of public assets.’

The flip side of this, though, is that it could concentrate the minds of some councils to move more swiftly on implementing their own plans for the sites. Though with local authority funding slashed, that may be a little optimistic.