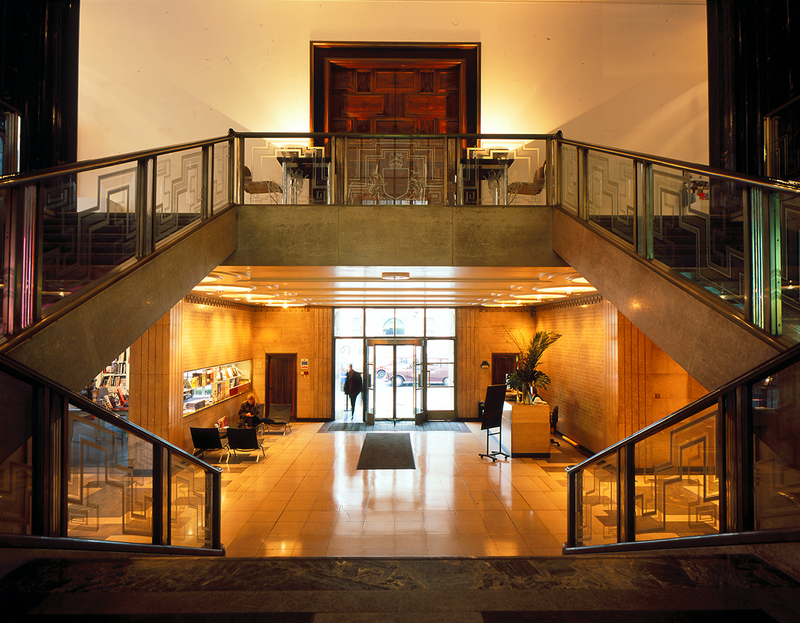 The RIBA’s 66 Portland Place, due to undergo an upgrade to operate as Simon Allford’s house of architecture. Credit: Rachel Smith / RIBA Collections

Shortly before launching his successful bid to become RIBA president, Simon Allford called for architects to ‘storm’ the institute’s 66 Portland Place headquarters, ‘taking it back for architects and architecture’.

As he refined these ideas into a manifesto, it became clear he was not advocating violent insurrection but increasing the building’s cultural offering to make it ‘a house of architecture’ through debates, lectures and exhibitions as well as the creation of a late-night bar.

Now, a month into his presidency, Allford has fleshed out his vision for an architectural competition to redevelop the grade II listed 1934 building designed by George Grey Wornum.

The brief will include making the building more accessible to those with disabilities, creating three new galleries and bringing it into line with zero carbon targets.

Allford said the plan was to appoint a masterplan architect who would work with a conservation architect and a number of young practices.

A budget has not yet been announced but the proposal comes as the institute revealed it had made an £8 million loss in the year ending December 2020.

In an effort to reverse this situation, RIBA chief executive Alan Vallance announced that it would be making job cuts as well as reviewing its property portfolio.

While the operating loss needs to be tackled, the wider financial picture for the institute was improved last year with the sale of its NBS technology arm for £172 million.

The expansion of permitted development rights (PDR) – the rules that allow certain developments to bypass the usual planning process – is being challenged in the courts.

PDR has allowed existing buildings to be extended or converted to provide housing without requiring planning permission. The system’s many critics have pointed to examples of low-quality homes that have been created as a result.

But the latest measures – introduced in August – allow developers to demolish and rebuild properties as well as adding to new homes above existing housing and offices.

The expansion has been challenged by environmental campaign group Rights: Community: Action (RCA) which argues that the government should have carried out a strategic environmental assessment before making the changes.

There are echoes here of the legal challenge to the proposed expansion of Heathrow Airport. Last year, the High Court ruled those plans illegal because ministers had not adequately taken into account the government’s commitment to tackle the climate crisis.  However in December the Supreme Court overturned the decision.

In November the High Court ruled against RCA’s wider challenge to the PDR expansion, but conceded that the case for requiring an environmental assessment was arguable, granting the RCA leave to appeal on this ground.

Now the Court of Appeal is considering this argument and is set to make a ruling today (5 October).

While Croydon Council’s housing delivery company, Brick By Brick, is being wound down, in Manchester the council is in the process of launching a similar enterprise, to be called This City.

The council’s executive committee voted in favour of creating the housing delivery company in June 2020 with the aim of building 500 affordable homes a year.

Tellingly, this was five months before Croydon Council ran into serious trouble with its own housing delivery company Brick By Brick.

In that case, a slow production pipeline meant that at the time the council was effectively declared bankrupt last November, it had lent £200 million to Brick By Brick without receiving any repayments.

Manchester City Council will certainly have made itself aware of the pitfalls of such an enterprise and, possibly as a result, is not being over-ambitious in its immediate plans

Last week, councillors approved £347,000 in design fees for two initial projects to be built on vacant council-owned sites: a 122-home development in Ancoats and Beswick with a mixture of flats and houses, 30 per cent of which will be at ‘accessible rent levels’; and an 82-flat development in Piccadilly, near the city centre, where 20 per cent of homes will have ‘accessible rent’. The other homes will be rented at market value rents.

Council-owned arm’s length house building firms became popular in the last decade as a way of meeting housing provision while avoiding right to buy rules. With conventional council housing, tenants are able to buy their property from the local authority at a discounted price, reducing its housing stock.

A report to Manchester councillors said that the design fee funding would maintain the momentum of the two schemes while This City is still being set up.

Hoko, a housing design company that describes itself as the ‘Uber for architecture’ has set out plans for an aggressive expansion that would see it become one of the country’s biggest architectural firms.

The company, which launched in 2019, seeks to provide user-friendly design services, with clear and fixed pricing, unlimited design revisions and digital tracking of the project from start to finish.

It also offers the services of its own contractor team through its sister company Hoko Build.

Speaking to the Architects’ Journal, its founder Danny Campbell argued that while larger architectural practices had traditionally spurned smaller domestic projects such as house extensions, it wants to reverse this principle by delivering such projects at a high volume.

Now it has launched a crowdfunding-style campaign to raise half a million pounds in equity through public investment, with plans to open 30 new studios and become ‘the UK’s largest homeowner architect’.

The company currently has an annual turnover of £1.4 million but want to increase this to £50 million by 2025 as well by expanding internationally.

But in the same article, TV presenter and commentator Kunle Barker said he feared the results of one company dominating what was at the moment a competitive marketplace, saying he feared ‘Hoko could be the McDonald’s of architecture’.

Campbell responded by saying that the McDonald’s ‘approach to systems, consistency and process is a big inspiration for me’.