Good advertising is about more than product, says architect Matt Vaudin of Stonewood Design. When you find someone doing something in a new way, you welcome it

Since buying his first Patagonia coat in Chamonix in his 20s, Matt Vaudin of Stonewood Design has been a fan of the US clothing brand and its ethos. Matt spoke to Marchitect about his favourite ad campaign and why it resonates with him.

As with most products, you find yourself buying into a lifestyle. Certainly, the product is good quality and looks good, but with Patagonia there’s more to it because you feel like you’re buying into an ethos that extends much further than the product. The founder of Patagonia, Yvon Chouinard, was a climber in the 1950s and 1960s and always described himself as a reluctant businessman even though he’s now at the helm of a multinational clothing firm. He has always had a different take on things and wrote an interesting book called Let my People go Surfing, which sets out a company philosophy that challenges capitalism.

It has been quite innovative in the workplace it's created. It did things that sound normal now, but were unusual when it started doing them. For example, creating a creche so people could bring their children to work and allowing people to be flexible in how they work so they are more productive because they’re able to balance their work and their life. We as an architects’ practice have embraced a lot of that spirit. 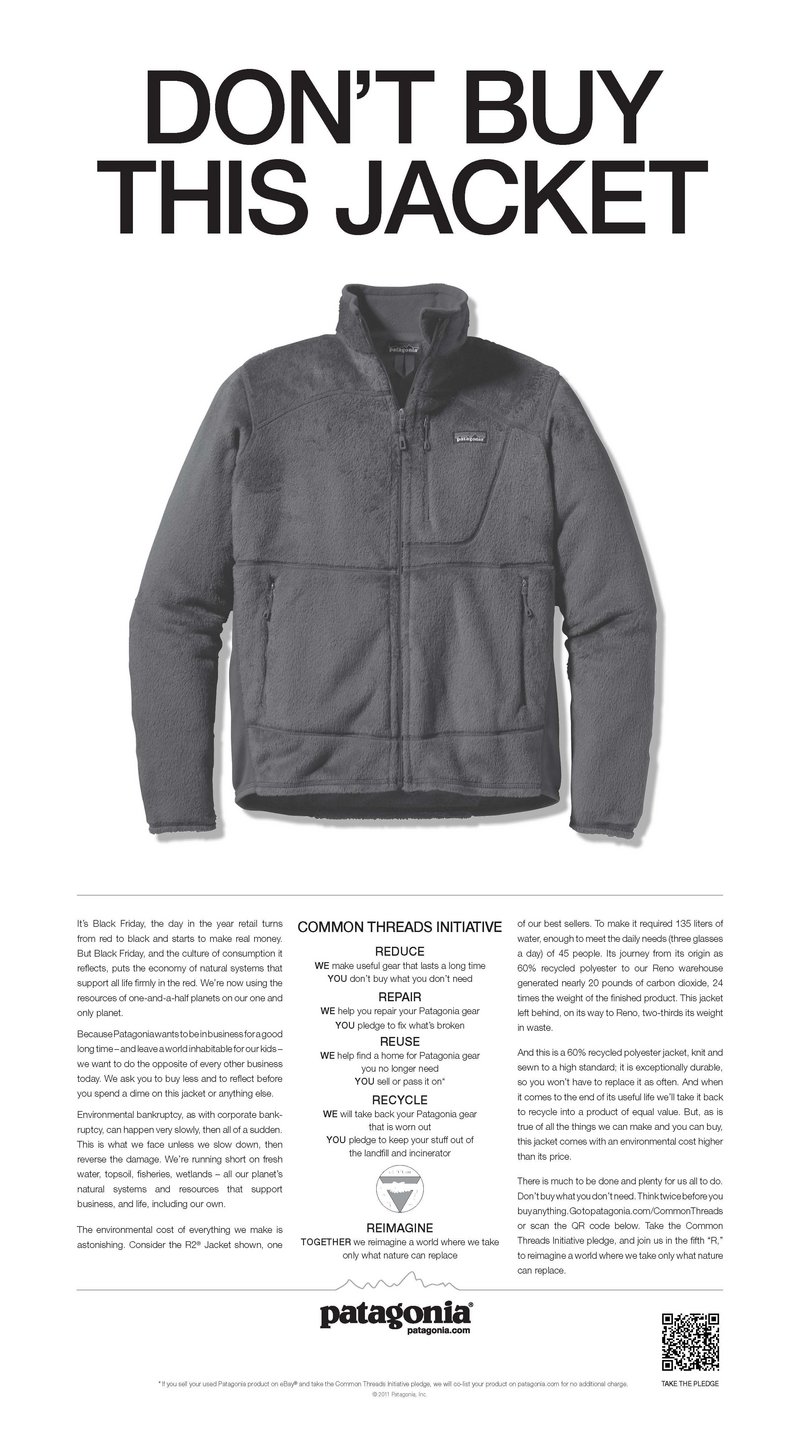 Why did the 'Don't Buy This Jacket' campaign stand out for you?

The advert exemplifies the ethos of Patagonia and, as an ad campaign, it is particularly striking. It made it into the front pages of the broadsheets as it was an unexpected campaign. It talks about Black Friday, saying of course we want to sell our products, but don’t just go and buy them because it’s Black Friday, think responsibly about why you’re buying. I think that’s why it stands out for me. At a time when other businesses are encouraging consumers to buy as much as possible, Patagonia is asking you to consider whether you actually need its products.

The company now has a Mobile Worn Wear service - a touring caravan that stops in different towns and cities and encourages people to bring their Patagonia garments to be mended. On one level it’s very much PR and promoting its image, but on the other it's good to encourage people to repair clothing. It’s small steps to a different approach. It always grapples with the fact that it is a big company that’s selling clothes, so there’s always a paradox. On balance, I think it’s all good.

You do look for things that are different; you welcome it. I suppose it’s the same when you hear politicians talk. You’re dying for one of them to say something refreshingly honest. I think that’s the same with an ad. For a company to have the strength to be able to say it and not worry about it, something honest stands out.

Patagonia has been political since the 1970s. In December 2017 it put up a notice on its website - ‘The President Stole Your Land’ - after the US government withdrew the protected status of two million acres across Utah. The White House (the House Committee on Natural Resources) issued a widely distributed email saying, ‘Patagonia: Don’t buy it.’ It was unprecedented for the federal government to condemn a company publicly in that way. I think that it’s refreshing as a good news story campaign and it’s built from that. In 2019 you’re dying for someone to say something honest.

For more information on how RIBA Journal can help you reach architects, please email our advertisement manager Richard Tomlin or call him on  +44 (0)20 7496 8329.