Bookies and charity shops yes, but also enviable amenities. How to shake off the ‘UK’s worst high street’ tag? xsite architecture, MawsonKerr and Shaw Studio all had their own ideas 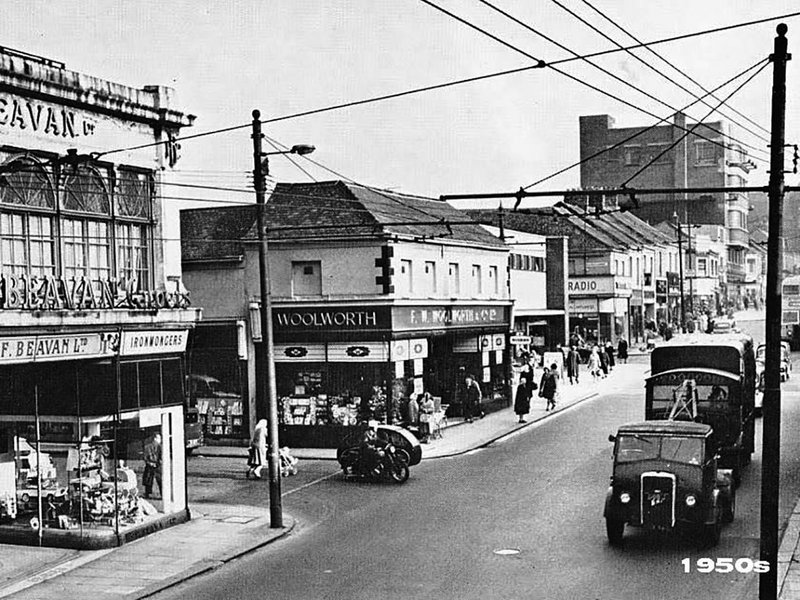 Shields Road in the 1950s when it was a busy commercial centre.

The Shields Road in Byker, Newcastle, has achieved national notoriety over the years. An analysis by retail property consultancy Harper Dennis Hobbs has ranked it the UK’s worst high street for the past two years. The street, which is adjacent to Byker Wall, is mainly a neighbourhood shopping area. ‘Like other areas across the country it has retail challenges,’ Newcastle City Council’s Richard Charge said at the judging day in nearby Ouseburn. It has a store vacancy rate of 16%, but some of its occupied units reflect deprivation: bookmakers, takeaways and charity shops.

Yet the area has amenities other locations might envy, including a Morrisons supermarket, post office, banks, library, swimming pool and independent traders. Its pub, the High Main, attracts people from the city centre at weekends.

The street is also very accessible by public transport, although a motorway bypass and metro line block pedestrian access for Byker Wall’s community. A metro station is located to the south and there are buses every three minutes, though this does mean the road is clogged with double deckers. Easy parking and diverse shops make this a popular spot for drivers to pick up last-minute purchases.

The architecture is varied and largely robust. Some finer buildings recall the street’s heyday when it had two department stores, Parrish’s and Beavans. But along and behind Shields Road where terraces have been removed, there are blank gables, expanses of paving and small car parking courts. Environmental quality is poor, with untidy buildings and a proliferation of bollards and railings.

These factors inspired very different responses from the entrants who embraced housing, health, growing, making, food, and even a festival. But the winner xsite is based within walking distance of Shields Road and brought local insight and passion to its proposal.

Local firm xsite began its proposal by announcing that contrary to reports it doesn’t believe the Shields Road is broken. Rather, the fact that it does not attract big retail names means its smaller businesses survive and its economy has found an equilibrium.

However, because the high street does not support the kind of property dealing and rising values that might be achievable elsewhere, large-scale change is not viable. The team’s winning proposal therefore took the view that architecture alone would not solve the subtler issues. Instead it proposed a scheme that concentrated on smaller interventions in the built fabric along with a social programme to improve perception and feel.

One of the primary moves was the reintroduction of a community festival to give the road a new USP. The street’s diverse food stores would provide the foundation for educational and ‘grow your own’ initiatives. New markets, start-up business space and community outlets would provide forums for talking, making and skills gathering, putting empty business premises to good use. Health and wellbeing would be promoted by the food and educational initiatives as well as activities – the street could provide a series of walking routes and host a Sunday park run or even a city games event.

Otherwise, rerouting buses, removing bollards and barriers and introducing greenery would give Shields Road an altogether friendlier face. Open space and sustainability would be enhanced as local people would be able to grow fruit and vegetables. Blank terrace gable ends would be enlivened with the help of local artists and in the longer term equipped with a shallow shop concept designed to provide small sales outlets for micro-businesses. Space would be made to provide opportunities for people to sit and talk on the street, which would help provide the natural surveillance that has been lacking.

Overall, the judges felt that xsite’s community focus stood out, particularly its realism towards implementation and how the area’s food diversity could be turned to advantage. At the moment, people go to the city’s west end for Asian foods, but a festival here could enhance identity and footfall.
‘Here’s a programme to help people come together,’ said John Prevc, an opinion Amanda Kahn echoed: ‘You can see the community’s gradual journey.’

High street biophilia is much needed there – John Prevc, judge

‘Byker has a strong community and already has food-related initiatives going on,’ said Shaw Studio’s David Shaw. With that in mind, the team’s entry turns Shields Road into a hub of food-centred activity.

The proposal’s main ingredient is an urban farm next to Morrisons, served with small scale interventions on the high street. The farm, with modular timber greenhouses, is a source of fresh, cheap fruit and vegetables, as well as an education and mentoring centre for schools and businesses. The high street would be owned by the local community via a high street land trust (HSLT), an adaptation of the community land trust model. It would collect 25% of business rates from retailers to help support new green infrastructure and food projects.

High street traffic would be reduced to a one-way single lane for buses and deliveries. Planters reduce traffic flow and there is sheltered space to sit and eat, hold a cooking demonstration, grow flowers or sell fruit and vegetables. The high ambition, HSLT concept, modular timber approach and street greening appealed to the judges.

MawsonKerr chose not to deal with Shields Road directly but to focus on the spaces behind it – expanses of car parking and empty plots. ‘Our analysis highlighted the barriers in connections to Byker. These feel like no-go areas at night,’ said the practice’s Daniel Dyer.

The team found that much of the housing close to Shields Road was demolished ahead of Byker Wall’s development, moving people further from the high street. Its approach had three key themes: reinhabit, lifestyle and adapt.

On the backland sites it reintroduced homes and density, proposing to convert empty spaces above shops to homes to increase retail demand and footfall. Uses on the high street are diversified, with former retail units accommodating start-ups or small-scale factories. ‘Byker has such a heritage of shipbuilding that there is an opportunity to tap into that making,’ explained Will Mawson.

Shields Road itself is reimagined as a linear town square with shared surfaces, where cars travel slowly and bicycles and pedestrians co-exist. Nature is introduced at street level and on rooftops.

The judges praised Mawson’s presentation which adopted the imagery of gardening – planting seeds of culture change and nurturing to enhance the sense of wellbeing. ‘It’s a journey over 20 years,’ said John Prevc.

Byker has a heritage of shipbuilding, and could tap into that manufacturing history through the creation of a makerspace – Will Mawson, MawsonKerr

Click here to read about the Dover and Tredegar proposals.

Future Town Centres was produced in association with ACO
@ACOwater