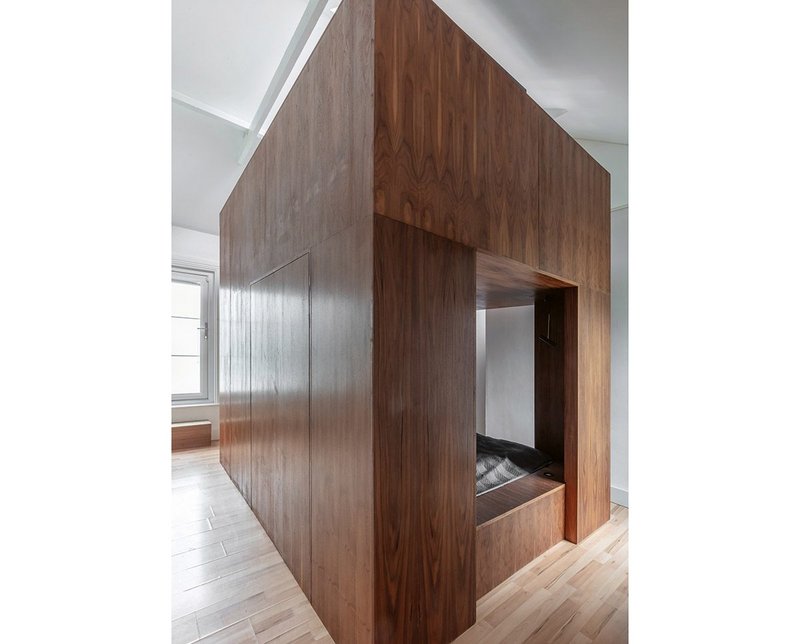 What: Tri-Pod, walnut box bed for three
Where: London

Take one two up and two down house and add a throuple. With three in a relationship instead of two, suddenly the double bed isn’t big enough –  and nor is the bedroom. And where do you get away from each other for a quiet dram or yoga stretch?

Perhaps in – or on top of – a box bed. Architect Alex Scott-Whitby of ScottWhitby Studio, who had already worked on seven micro-projects for the clients, saw that the crawl space of the loft wasn’t enough for an extension but the roof ties meant it could be opened up to the underside of the roof. And dispensing with the corridor and walls upstairs made an airy space lit from windows on both sides, and from above from an existing rooflight.

Could the bed be a four poster? Scott-Whitby sketched it out after his investigation of the loft and proposed that the space on top could be a little retreat under the existing skylight. And instead of an expensive upgrade to windows – to give quiet from traffic and the Heathrow flight path for one of the clients for his sleeping disorder – the four poster became a box bed. This walnut box closes right up or can be opened to reveal bed, wardrobes and tiny staircase – it packs a lot into its 7.5m2. Push and ­release ironmongery ensures everything is hidden until the doors open.

Scott-Whitby worked with a relative of one of the clients, a Part I member of the practice who had originally worked as a carpenter. He created a ­series of simple IKEA-style construction drawings drawn from the 3D model, which showed how to put together the softwood carcass and add plenty of insulation before it was clad in ­walnut-faced ply. It was half built before moving on site then completed over a month of the client’s summer holidays. The 1mm walnut ­veneer was matched and glued on site.

The first discussions were in May, with the throuple able take possession in August. And the budget? £100,000 was originally set aside, but the actual cost was £25,000, including taking out the walls. ‘One guy, three months and some material,’ says Scott-Whitby.

The space up above the bed has become a true retreat, not just for the rare glass of whisky but as an extra, sunny relaxing space during the enforced isolation of the coronavirus.