How did Peter Ebner and Friends make the undulating copper walls, floor and ceiling of a Munich townhouse? 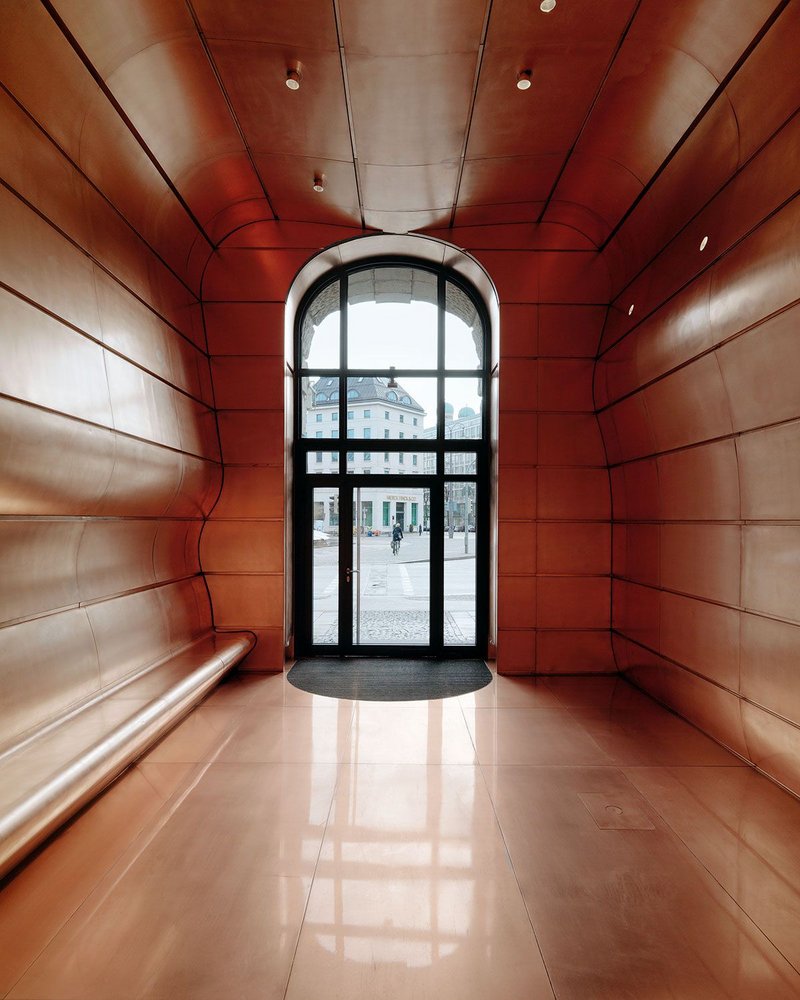 An entrance room with copper walls, ceiling and floor adds a splash of baroque-inspired bling to the inside of this art nouveau-style townhouse in Lenbachplatz  central Munich.

The burnished interior, by architect Peter Ebner and Friends, draws on the local historic vernacular, including beer tanks in local breweries and angled copper roofs, but the sensitive material posed serious design challenges around buildability.

The client, property developer Freiherrliche von und zu Guttenberg’sche Hauptverwaltung, a business run by the family behind the world’s first printing press, wanted ‘an exceptional entrance’ for the building, which was built in 1904 and rebuilt inside after significant bombing in the Second World War.

Ebner drew inspiration from ornately- curved German baroque ceilings and the traditional use of copper to roof buildings in the region. Copper beer tanks, often glimpsed through the windows of Munich’s many historic breweries, added to his fascination with the metal, he told RIBAJ: ‘Whenever I passed by I thought they looked so beautiful; copper makes such a lovely warm reflection.’

The client was convinced of the material’s merits, but enthusiasm turned to trepidation when the architect learned of its limitations. ‘I spoke to the head of architecture at a leading consulting engineer and he said ‘Peter, don’t do it! We’ve had a lot of difficulties with copper, it’s really tricky to handle.’ When workers hold copper sheets, acid naturally-present on their fingers can stain the metal, and thin panels can easily deform. However, the client’s mind was made up, so we had to spend a long time figuring out a workable solution.’

The chosen approach was to fabricate a curved support for the rippled copper walls in situ, then dismantle it in sections and transport it to the metal fabricator’s workshop to use as a mould for the outer layer of copper.

The construction company built the support in horizontal bands (the design picks up on horizontal historic elements on the facade in an effort to unify the building’s interior and exterior) on a wooden frame filled with fireproofing and covered by a layer of curved plasterboard.

The panels were first ‘montaged’ together on the walls, then ‘demontaged’ to transport to the metal maker to press on 2mm-thick sheets of copper supplied by 3M. Rather apply a protective lacquer, the client agreed to polish the walls several times a year to retain the natural unfinished aesthetic.

According to Ebner, great skill was required to form the copper over the panels without deformations and to maintain the illusion of a continuous curve across multiple panels.

To create the floor, the copper sheets were glued direct onto the concrete slab in a layer thick enough to prevent curling at the corners. A transparent liquid protection was painted on to prevent scuffing and must be reapplied every two to three years.

According to Ebner, the most interesting technical aspect of the job was the process of arriving at a workable solution.

An original plan to use a thin layer of copper on the walls had to be abandoned when the sheets deformed in tests.  ‘Working with such a malleable metal, we had to think about potential damage from bumps and bangs, as part of the long term maintenance strategy for the room. This led to the idea of removing individual panels to replace the copper without having to take the whole thing down,’ says Ebner.

Each panel is roughly 600mm high, 3m long and up to 300mm deep and can be removed by hand without the need for any specialist equipment.