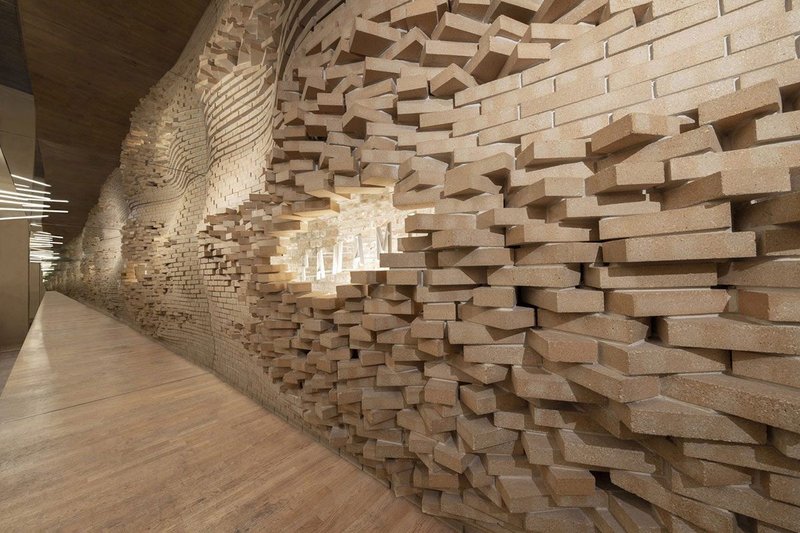 The ‘fourth wall’ concept is particular to performance – the idea of an invisible wall that ­allows performers to be seen by the audience while they remain seemingly unaware of the onlookers. In comedy clubs, however, this wall is thoroughly broken by the comedian addressing and interacting with the audience.

This was the inspiration for the extraordinary brick backdrop at Le Paname, one of Paris’s most well-known comedy clubs. Here the stage’s wall seemingly erupts behind the performer, the bricks displaced and jutting out, with a void in the middle revealing the illuminated name of the club. The drama is amplified to great effect by the mirrored ceiling and walls to give the impression of a far larger installation.

So how did the architect, Paris and LA-based practice Malka Architecture, do it? Stephane Malka explains that as well as the fourth wall concept, he wanted to reference the no-frills origins of comedy clubs in repurposed warehouse/industrial spaces of New York and Chicago. ‘Brick was part of the DNA,’ he says, adding that he was however keen to break away from the ordered, linear nature of a brick wall. The resulting dynamic design is described by the practice as a timeline of ‘progressive urban chaos’.Built in front of the perimeter (brick) wall, the installation is self-supporting and measures 3.5m high by 9m wide with a depth of 105cm at its thickest. It comprises 1085 Brique de Terre made from compressed raw earth and measuring 8 by 11 by 24cm. With each brick weighing 2.4kg, its total weight is 2.6 tonnes.

Having come up with the concept, the architect used a 3D modelling programme to create the design, later moving to a parametric software programme. Malka says this helped it establish a human rather than computerised feel, although the practice, wary of being copied, won’t give away too much of its creative process. In combination with BIM, this software enabled it to design a wall that required no additional structure, even around the focal point void, by ensuring that even bricks that are turning sufficiently support those around them.

‘It’s very heavy and has its own inertia and structural restraint,’ says Malka.

The wall was built over eight weeks by BSphère and without the help of either mock-ups or structural engineers. Mortier d’argile – clay mortar – was used. The overall visual effect is akin to that of a magnetic force, with the erupting bricks increasingly angled to face inwards.

‘They turn as if magnetised towards the stand-up comedian and the audience,’ says Malka, adding that for him, the most interesting part of the installation is less the explosion in the middle, than the places where the brick work starts to deviate from its alignment.

The wall was completed as part of a restaurant, bar and exhibition space extension before the Covid-19 crisis, and proved a huge hit with visitors and an Instagram favourite, with people taking their picture in front of the wall. So much so, says Malka, that it has become one of the strongest images associated with the club.

The architect was subsequently asked to recreate the exploding wall effect in a digital backdrop at a concert hall venue for a television programme.