Lossiemouth might be a small village on Scotland’s north eastern coast, but the nearby RAF air base that bears its name will forever be synonymous with some of the most significant events of the Second World War – most  notably the Dambusters, whose famous ‘bouncing bombs’ earned RAF Squadron 617 the right to appropriate Louis XV of France’s famous dying words ‘Après moi, le Deluge’ as its motto.

Interestingly, the hangars still in use at the base date from not 1939, but 1945, designed to deal with the Soviet Cold War threat. As part of their refurbishment to make them battle ready for the incoming Typhoon F2 Eurofighters, (transferring from RAF Leuchars) the 4,500m2 hangars has are having their concrete floors resurfaced with Sikafloor. The Ministry of Defence gave Forfar, Angus-based Anderson Specialist Contracting a tight month to complete the works on the first – no mean feat, given what had to be done before the new floor was laid. 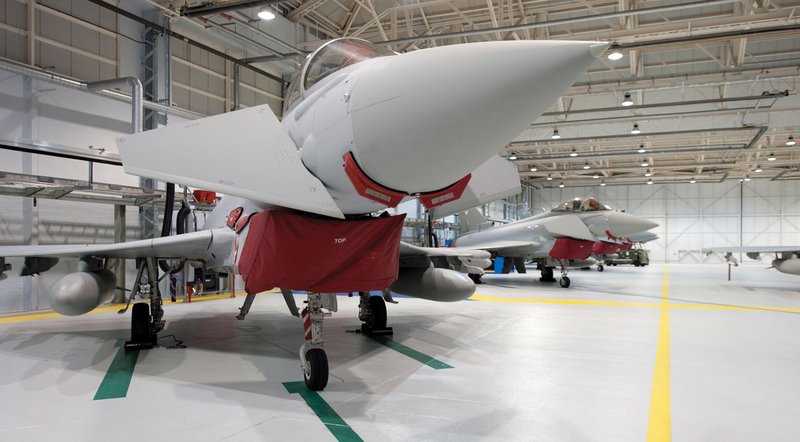 The Typhoon F2 Eurofighters happily settled on their guidelines.

Coincidentally, this involved another form of mobile ballistics – high velocity ballbearings. ‘Before doing anything we needed to captive blast the floor to remove existing contaminants and expose a concrete surface profile for the new floor to adhere to,’ explains ASC’s Ian Anderson. This involved running a 700mm wide steel shot machine over the concrete surface. Any larger pits were trowel filled, although Anderson says concrete quality on the 60 year old building was surprisingly good. The Sika finish has two parts – a thick primer (A) and a final finish coat (B), with the primer doing most of the work. ‘The primer’s a thick application that’s a bit like industrial custard,’ says Anderson graphically. ‘We apply it with an open-cell roller. It rises in peaks when applied and then settles flat.’ This was left to cure for a day before the finishing coat was applied. From the initial shot firing of the surface, to the aircraft guide lines being painted on the finished floor, each 1000m2 took a week to complete.

The aircraft guide lines took three days to set out, being surveyed and then re-checked to ensure that when the £35m Eurofighters are towed in to be parked diagonally side by side, they have an exact 600mm clearance from one wing tip to the other. With hardware worth that much, and the effort put into ground work, Anderson was keen that they, like the Dam­busters, didn’t slip up on the parking arrangements. • 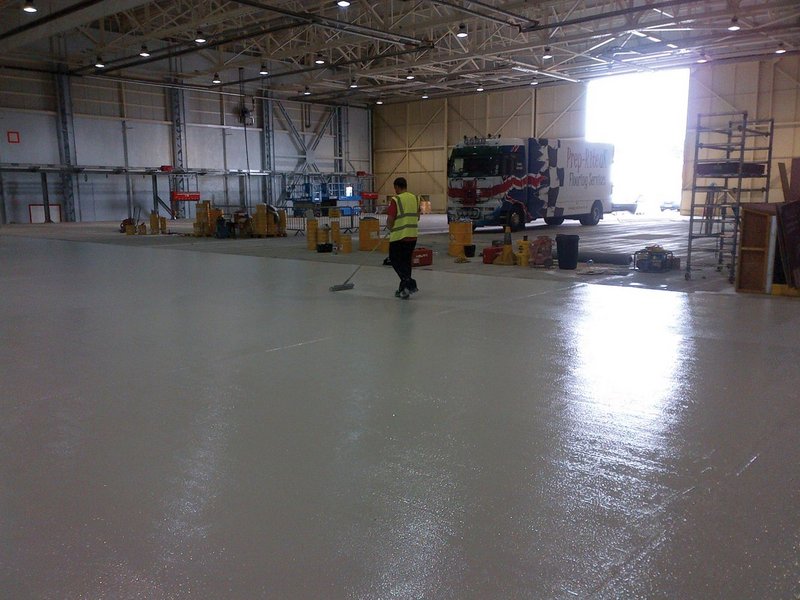 Installing the resin floor was done in 1,000m2 areas, each of which took a week.

Sika was used for the Lossiemouth project having been tested in the field on other MoD facilities, being both non-slip and, with its gloss finish, easy to clean. ‘The key thing is that we provided the non-slip finish without aggregating,’ explains Sika northern region sales manager Ronnie Turner, of the general process of introducing aggregate to resin surfaces to give a greater abrasive grip. This aspect was of particular interest to the MoD. ‘ Their biggest concern is with Flying Object Damage (FOD), and with engines costing up to £1M each, fixing them can mean mega money.’ That said, it wasn’t mega money to lay the floor. ‘We have other products with greater resin levels that provide greater robustness, but Sikafloor-264 Thixo had the right balance of cost-effectiveness and performance,’ he adds. And it seems that the balance has worked so far, he concludes. ‘The best feedback you can get from the MoD regarding products you’ve installed for them is no feedback at all.’

Concrete substrate must be sound and of min 25N/­mm2 compressive strength. Repairs to substrate  can be carried out using Sikafloor, SikaDur and SikaGard.