What: Underwater concrete
Where: Rijksmuseum Amsterdam 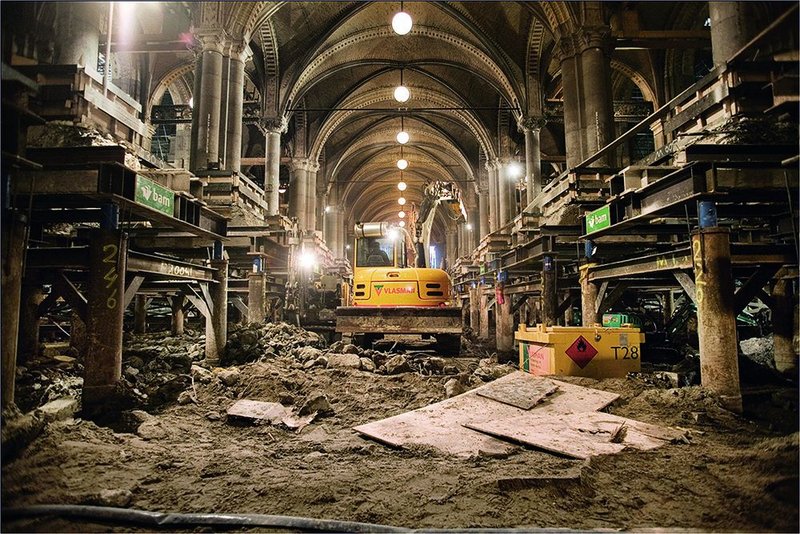 The Rijksmuseum’s public passageway was the final stage, dramatically excavated to its foundations to link the new courtyard basements.

Forget the finger in a dyke story. When, in its 2002 competition-winning proposal to refurbish Amsterdam’s Rijksmuseum, Spanish architect Cruz and Ortiz proposed digging basements into the world-famous museum’s interior courtyards, even the Dutch engineer Arcadis balked at the idea. But it had to concede the spatial clarity the idea offered. And the only way to do it was by using waterproof concrete.

‘But we drew the line at linking the two courtyards’ basements beneath the museum’s central passageway [a heavily used public right of way]. It was far too risky, even for us,’ recalls Arcadis director of structural engineering André de Roo.  As it is, the 1895 brick-built museum sits on 8,000 wooden piles, 500 of which would have to be removed to excavate. De Roo explains that these are typically 12-14m long, as the first load bearing sand layer does not start until 11m down. And the ground is soaked. ‘Water appears at 80cm below the surface,’ says De Roo, ‘so anything you do below ground is really below the water table.’

De Roo explains that because the clay’s ability to form a seal could not be guaranteed, running sheet piles into it was not an option. Instead, tension piles were driven to the level of the new basements across the courtyard areas, and steel sheet piles sunk along their edges. Once the steel box walls had been constructed above the clay layer, the soil was partially excavated, allowing struts to prop the sheet walls, holding them in place. 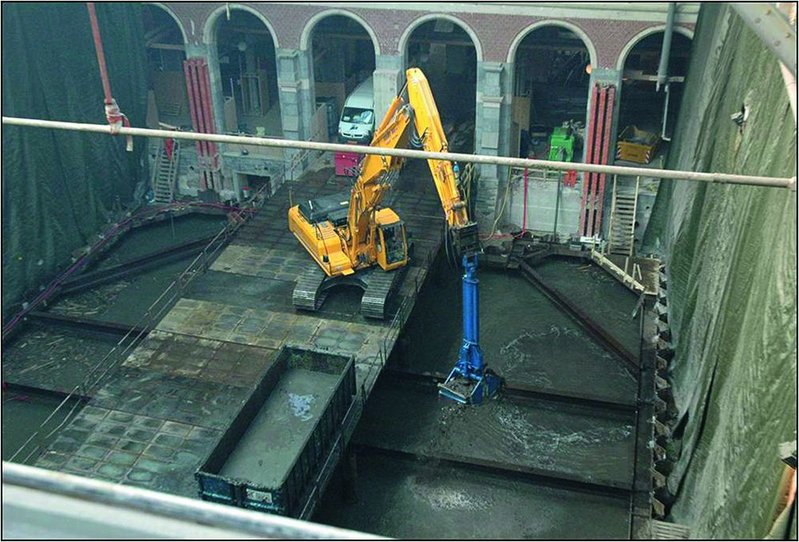 All the soil excavation was done below Amsterdam’s shallow water table. Once dug,the underwater concrete was pumped in to create the floor of the new basements.

Underwater digging continued down to the tension pile caps, when the waterproof concrete was pumped in to start the new basement floor. The concrete, with good flow characteristics, sank to the bottom of the pit floor and self-compacted. Cast to 800mm thick, it hardened to full capacity in two weeks, with the advantage of behaving as a form of horizontal diaphragm holding the steel sheet walls in place. Integrity ensured, new concrete floors and walls were cast, creating two basement boxes either side of the central passageway.

Connecting the two basements involved excavating the cellars below this central wing and narrowing the huge concrete support columns that were built in the 1960s to support the neo-gothic structure above. Propping up the lot on temporary steel jacks, the whole passage was floated, original concrete columns removed, and new, slimmer ones inserted beneath.

‘We’re used to working with underwater concrete,’ says De Roo, ‘But it was great to see its use here,  just so cyclists could bike back to the suburbs, as they always have, through our national art gallery.’ 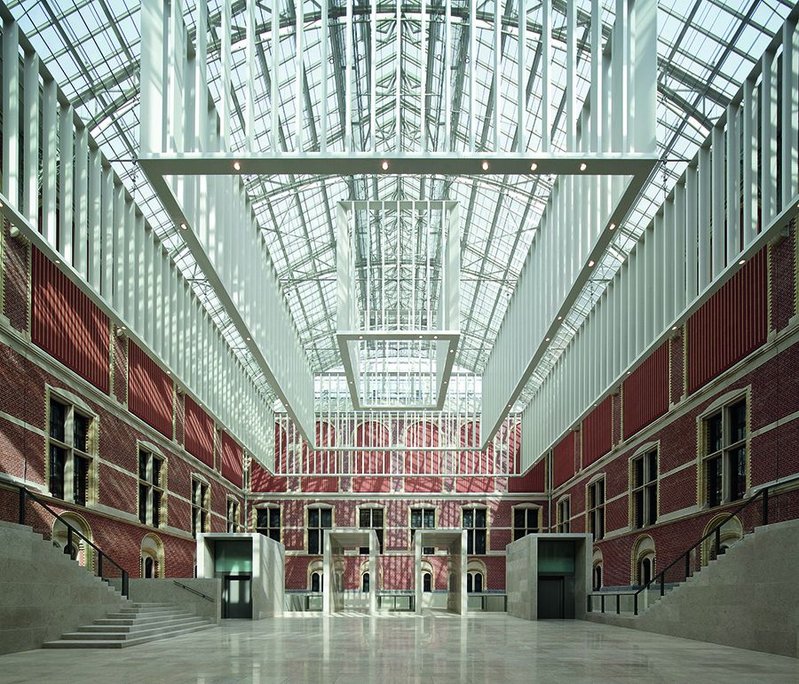 One of the new internal courtyards.

Plasticisers and fly ash and colloidal admixtures improve the flow characteristics of waterproof underwater concrete, although most of the remaining constituents are the same as the standard material. Concrete is laid using ‘hopdobbers’ – a hopper on a gantry that runs across the casting zone, pumping the concrete in at intervals along its run at about 100m3/hr. While concrete cube tests are carried out on the mixture in the factory, the only way it can be checked on site is through test-cubes underwater. Trained divers do this and check the structural quality before the water is pumped out. At the Rijksmuseum, specialist firm DCN performed this work. The cold water actually helps the concrete to set, arresting the exothermic process and reducing the likelihood of thermal cracking occurring as it cures. The superplasticity means the concrete self-levels to some extent, but it is usual to have fluctuations of +/- 50mm on the top surface.  Cement content is usually 350-400kg.m3 with aggregate size of around 16mm. This yields a typical compressive strength of 35MPa. The underwater concrete floor was 800mm thick and not reinforced. Being strongly water repellent, there is negligible risk of washout and sludge formation during casting. It’s very cohesive, with little risk of separation, and needs no vibration.