Water gushes out of the ground at 46° in Bath, perfect for diversion to heat the floor of the Abbey 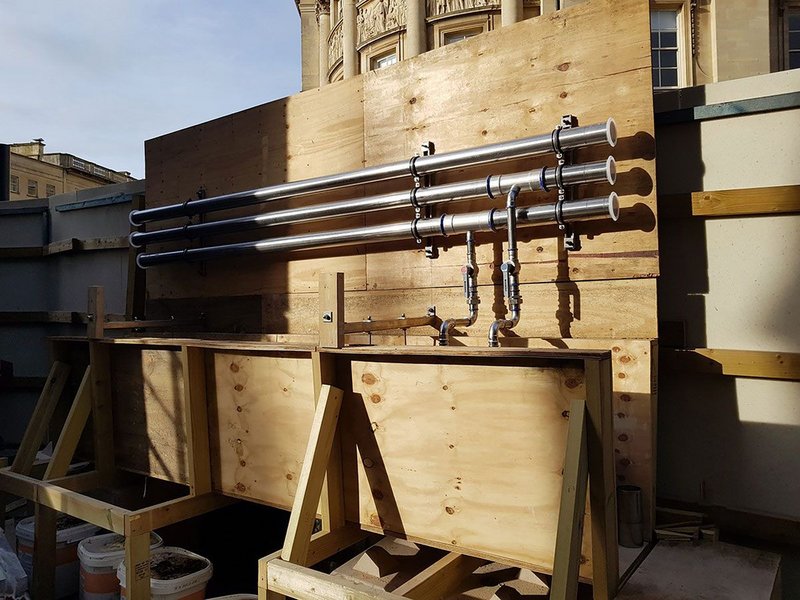 A full-scale mock-up of the pipework system and Great Drain constructed outside the abbey. Credit: Isoenergy

The Roman baths were constructed around 70AD in the city of Bath as a grand bathing and socialising complex. The baths are still kept topped up by thermal springs which deliver 14 litres of 46°C steaming water to the complex every second. However, since the late 1970s bathing has not been permitted following discovery of a dangerous amoeba, so the hot water from the attraction has, quite literally, gone down the drain – the Roman Great Drain – to the River Avon.

Now, under the £15 million Footprint Project, architect Feilden Clegg Bradley Studios, working with engineer BuroHappold, is working on a scheme to capture heat from water passing along the Great Drain for use warming the neighbouring 16th-century Bath Abbey.

This ambitious scheme is only possible because under the Footprint Project the abbey’s historic floor is being repaired and restored. The floor is completely paved with carved memorial stones, beneath which are the bodies from 6,000 burials. Under the scheme, the memorials will be revealed for the first time since the 1860s, when they were hidden from view by new pews. The team is using the opportunity to install a new underfloor heating system to replace the existing cast-iron pipes and floor gratings, which had reached the end of their life.

Underfloor heating is ideal for connection to the low grade heat captured from water in the drain because it operates at a relatively low temperature. It will provide radiant heat to occupants in the Abbey’s cavernous interior.

A sub-floor will protect the bodies. Underfloor pipes will be cast into a screed laid on the restored floor, which will then be covered by the 150mm-thick memorial stones placed on top. The thermal mass created by this solution means the floor will be very slow to respond to temperature fluctuations so it is envisaged that from October to March the heating will remain on for 24 hours a day.

Heat exchangers will capture heat at 25° from water flowing through the Great Drain (see below). Electric heat pumps then further raise the temperature to 55°C so it can be used to heat the abbey’s floor.

A particular challenge was that water flowing in the Great Drain is only about 200mm deep. To increase its depth to cover the energy-blades, a 600mm high weir is being installed in the drain. This will have a slot at its base to allow some underflow to prevent any build-up of silt.

The project started in 2010. It is now on site with the energy blades set for installation in autumn. The project is scheduled for completion 2020.

Blade Runner
The high mineral and silt content of the spring water means that custom-built 3,000mm long energy-blade heat exchangers had to be built of high marine grade stainless steel. They are provided by Isoenergy and will be fitted in the Great Drain to capture up to 160kW of heat. The blades will be installed in 10 pairs along a relatively straight section of the drain, which is about 7m below street level. At this point the water temperature in the Great Drain is about 36°C. The blades are connected to the heat pump by a closed stainless steel pipework loop containing a glycol solution.

Numerous trials have been carried out both in the Great Drain and above ground. Subterranean tests included a mock-up of the weir to test that the water would be deep enough for the heat exchangers, without it backing up to the Roman Baths. The River Avon was also found to back up the Great Drain in winter, which diluted the temperature of the spring water in it – though  not enough to have a major impact on the scheme’s operation. Above ground, the team has built a mock-up of the drain to demonstrate the installation method for the pipework and heat exchangers and to plan their maintenance within the confines of the Great Drain.