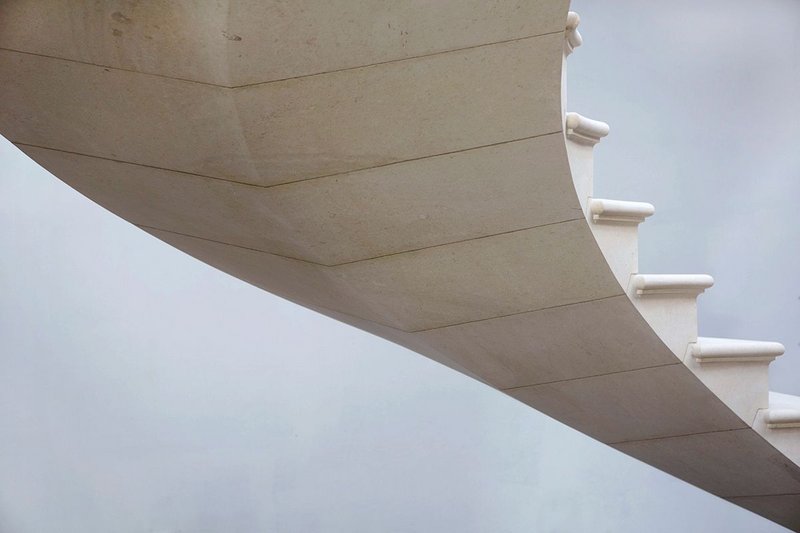 What: 320° self-supporting stone stair
Where: Manchester and elsewhere

This stair is as remarkable as it looks. It is a 320°, self-supporting staircase made in solid limestone. No supports, no cantilevers, no tricks of the eye; just snaking through space, in two identical flights. Oh, what the Georgians would have given for this kind of elegance.

Designed and constructed by The Stone­masonry Company in collaboration with Webb Yates Engineers, the 320° stair is believed to be the first of its kind in the world. It is the team’s latest innovation aimed at proving how, as the firm’s project manager Pierre Bidaud puts it, ‘there is still scope to use stone as an innovative, modern load-bearing material’.

Based on reinforcement and post-tensioning, the staircase – in a private new build house by RAL Architects in Manchester – rises through two flights of 22 steps. Each tread is 1.3m wide and weighs 150kg. Each flight measures 3.7m from top to bottom and has a diameter of 3.4m. They are thinner than corresponding concrete structures, with the advantages of architectural stone for detailing.

The Stonemasonry Company’s first collaboration with Webb Yates was in 2009 on a 70° stone staircase. The team has upped the stakes on every subsequent project, to 90°, 180°, 280° and now 320°. Each flight in this latest project weighs 3.3 tonnes and costs about £60,000. They are held together by two fine 12mm diameter post-tensioned steel cables, threaded through the treads ‘like a string of pearls’ on site. Each was built up step by step using a temporary supporting blockwork wall. The cables were attached to hidden metal plates at the top and bottom of each flight as it was completed, creating a rigid, floating structure. 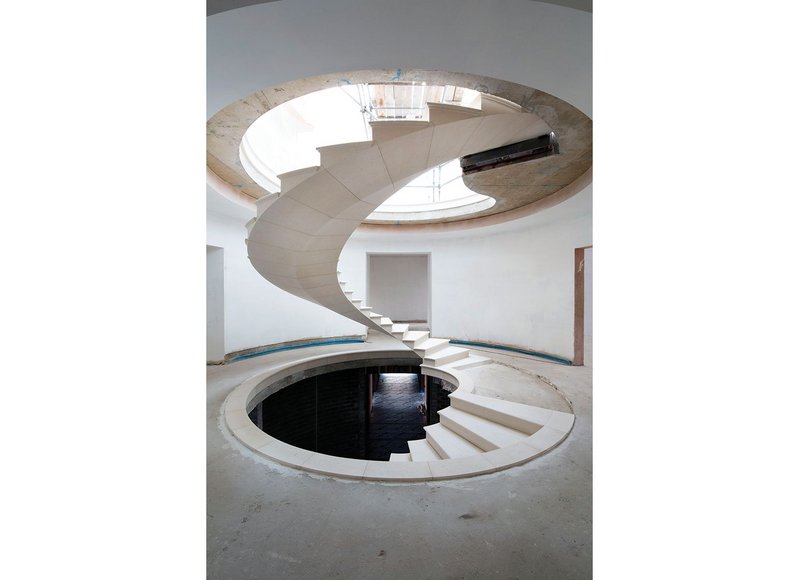 ‘Although it looks stunning, there is no magic here; the staircase is actually very simple,’ says Bidaud. ‘We are using 1000 years of experience from our stonemason ancestors and combining this knowledge with modern engineering. To get the 320° staircase from the drawing board to reality, we needed to develop new thinking not usually part of a stonemason’s toolkit – we use software modelling and we advanced our methods of physical testing. Much of the work is upfront research, making models and prototypes.’

The firm has 48 stair flights on its order book, mainly in London, the Home Counties and the North West, but also in France and Greece.

Learning the craft
The Stonemasonry Company was founded by Frenchmen Alexandre Bertrand and Paul Henri Teillant in 2009 and sits at the end of the limestone belt in Wymondham, Leicestershire. ‘There is more scope for exciting work in the UK than France,’ explains Bidaud. ‘France has a rigid construction design process that does not allow such a flexible use of natural materials’. Today the team comprises 22 people, but the company could not exist without its very specific training in France, which is more holistic than the equivalent in the UK. The founders and Bidaud were trained as part of Les Compagnons du Devoir et du Tour de France, a guild of journeymen and women transforming traditional materials such as leather, wood, metal and stone. It takes between six and ten years to qualify as an ‘ancient’, and trainees are required to travel through France and western Europe working on live projects as they go. The first two years are spent as an apprentice, learning on the job by day and attending evening and Saturday workshops and lectures. Unlike in the UK, where The Stonemasonry Company employs architectural draughtsmen to draw, these French stonemasons are fully absorbed in their craft, learning its full breadth, from drawing to building.