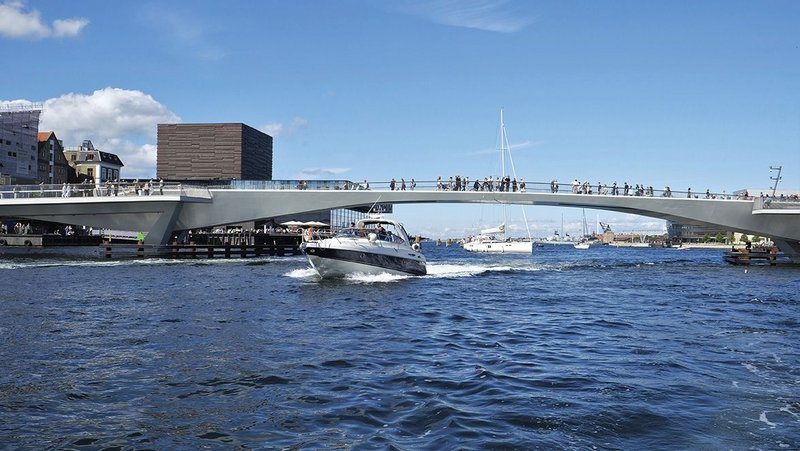 There is, as the inauguration press release states, no other bridge like this in the world. Studio Bednarski’s international competition-winning bridge finally opened to the city at the end of the summer, as much a relief to the architects as it was to the city. Its tricky gestation wasn’t due to design changes along the way however – initial visualisations are virtually identical to the completed structure. Over its construction the project had to endure poor workmanship and the bankruptcy of the first contractor.

Linking two sides of Copenhagen’s harbour side near the opera house, the 180m long pedestrian and cycle bridge is characterised by two 25m wide central sliding steel sections that ­elegantly retract into the main body of the structure to create a 50m wide opening to allow ships to pass through. Concrete access decks either side of these sections give city dwellers ringside seats to watch the mechanism in action – a process that takes about a minute.

The complexity is increased because the bridge is slightly sinuous, mirrored around its centre point. This was deliberate – maximising the length of the access ramps across the opening and ensuring that their slope does not exceed 4% also lessened intrusion on the harbour sides. Because of the huge cantilevers involved, both 8m wide moving steel decks had to be formed from triangulated plate sections, each deck weighing 250 tonnes. The outer side faces of these cantilevering spans are slightly curved, smooth steel surfaces, while the undersides are far more complex. Here, the steel plate is made up of three-dimensional facets creating a ‘W’ form in section and giving a spine-like quality when viewed from below. The spans were made in one piece in Vistal, Poland, transported to Copenhagen by sea and installed by a floating crane over one night.

Key to the bridge is its sliding mechanism, with both moving decks resting on a set of 1.8m diameter forged solid steel twin wheels. The decks are held in line by stainless steel tracks set into the concrete sections on either side of the bridge; two sets of bogies run with each of these, effectively forming a three point support for the decks. Constantly changing moment forces as the bridge opens and closes were behind the creation of its unique form (see box).

Insolvency and delays aside, the newly inaugurated bridge has proved immensely popular with the residents of Copenhagen. Initially expected to deal with 7,000 pedestrians and cyclists a day, it is handling more than 10,000. Users have the pleasure of being able to watch not only the retraction process at close quarters from the balcony at the end of the concrete deck, but also boats passing through the navigation channel. Taking pride of place in the harbour, Studio Bednarski’s new bridge is a testament to how simple, minimalistic design can push bridge technology at the same time as creating a thrilling new meeting point for the city.

The engineering complexity of the scheme is that the moment load forces constantly change as the bridge retracts and moves out, explains project engineer Flint & Neill. When the bridge is retracted, the distance from the bogies and the steel twin wheels is at a maximum; when closed it is at a minimum. When it is open, the steel wheels act as a form of pivot, with minimal loads on the bogies, but as the bridge closes, the cantilever forces increase to put far greater loads on the bogeys as they draw closer to the central support wheels. Lateral rollers within guides allow for smaller adjustments to ensure that the two bridge sections meet in the middle. Final slotting together is achieved via two conical steel pins on one deck that register into female slots on the opposite deck, ensuring the decks are completely locked together when closed.