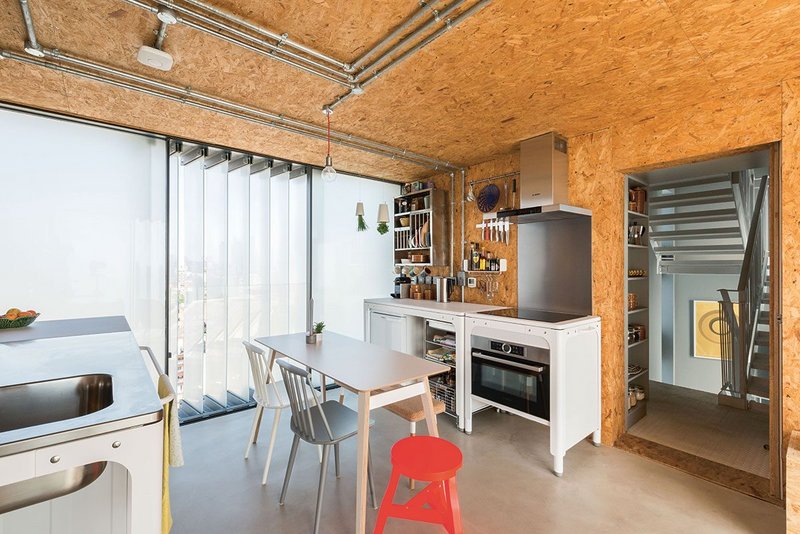 ‘This is a unique space so we wanted it to have a really strong identity,’ says architect Brian Heron, explaining his decision to finish the walls and ceiling of his penthouse home with Norbord’s SterlingOSB Zero orientated strand board. He says the OSB ‘gives the space a visual warmth while providing flexibility and adaptability in the location of storage units and furniture’.

If anything, Heron is understating the credentials of the one-bedroom duplex. It was created within the concrete walls of a former water tank enclosure 17 floors up, on the roof of the Denys Lasdun designed grade 2* listed Keeling House in Bethnal Green, London.

This idiosyncratic apartment is a self-build. Heron is an architect at Ian Ritchie Architects; his wife trained as an architect too. The couple bought the space in 2009, when they were renting a flat on the block’s 10th floor. ‘I think the only person prepared to take on this project would be an architect who lived in the building,’ Heron laughs.

The two-storey concrete shell that they planned to turn into their new home was small; its footprint was just 20m2. What’s more, the building’s listed status meant that it was not possible to extend outwards. ‘The design had to work hard because space could not be gained from outside,’ explains Heron. The only exception was the permitted addition of a new external access stair to connect the tank room to the block’s existing stair, which stopped at the 15th floor. ‘We had to extend the structure above the lift motor room to provide access to the 17th and 18th floors,’ he says. ‘The new stair core is now within the thermal line of the apartment.’

The planners had also given consent for plywood infill panels on the enclosure’s east- and west-facing elevations to be removed. ‘The consented design allowed the plywood to be removed and the infills to be fully glazed,’ Heron explains.

These glazed elevations now flood the apartment with light. They are formed from a clear-glass central panel, fitted externally, with sandblasted vertical louvres, and sandblasted glass side panels. Sandblasted elements comply with a planning requirement that the apartment should not overlook top-floor penthouse flats. The solution worked well: ‘You get an amazing view out but don’t overlook your neighbours and you capture all the available daylight. You also get to see the sun rise and set, which is a real treat,’ Heron explains.

Apart from the glazed elevations, the apartment is surrounded by the concrete structure. This is lined with high performing rigid PIR insulation to ensure compliance with Building Regulations while minimising its encroachment on the floor plate. ‘If we were not dealing with a listed building, we could have insulated externally to optimise space, but we had to insulate internally,’ says Heron.

The insulation is concealed behind SterlingOSB Zero panels which line both the walls and ceiling. ‘We did consider having exposed concrete walls internally but, because the sand-blasted glass was a planning requirement and we wanted a polished concrete floor, we were concerned the space would be quite stark. We went for a timber finish to provide visual warmth’.

Birch plywood was also considered for the internal finish but it was the ‘slightly more raw’ appearance of the SterlingOSB Zero  sheets that won over the couple. ‘It felt right for the space and because it’s a self-build, OSB is a lot more forgiving so the joint and fixings are easily lost’ Heron explains.

SterlingOSB Zero’s sustainability credentials were also appealing: ‘The OSB we used is manufactured in the UK by Norbord from timber grown in the UK, it’s FSC certified and it’s more economical than birch plywood,’ Heron adds.

Norbord SterlingOSB Zero’s appearance is enhanced by the surface-mounted electrical conduit. ‘We loved the aesthetic of exposed conduit, which was in keeping with the nature of the space and also had the advantage of enabling continuity of insulation because there was no need to embed conduit within the insulation’.

As it turned out, the decision to use SterlingOSB Zero was particularly fortuitous when it came to adapting the design. ‘By the time the apartment was ready for us to move in we had a young family, so the design had to evolve accordingly,’ says Heron. One adaptation was the design of the couple’s bed, which was raised off the ground to create a space for their son’s bed beneath. ‘My wife and I designed it in OSB over lunch one Sunday and our joiner built it all in-situ,’ Heron says. SterlingOSB Zero was also used to form the wardrobe storage and drawers in the bedroom. ‘We loved the bed so much we designed toy storage for our son as well, which our joiner made using OSB off-cuts,’ he adds.

SterlingOSB Zero features in the bathroom too. The toilet cistern and the apartment’s mechanical ventilation heat recovery unit are concealed behind OSB access panels. All the OSB is sealed with a fire retardant lacquer.

Heron is pleased with the final result. ‘With a dry-lining system using plasterboard, you’d have to put pattressing behind it to put up heavy shelving,’ he says. ‘Here the SterlingOSB Zero  acts as a full-wall pattress and, because it is 18mm thick and attached to timber studs, we can fix to it anywhere and everywhere – very useful for adding storage in such a small space’

A brief history of Keeling House

Keeling House was constructed in 1957.

The social housing scheme was designed by Sir Denys Lasdun as a cluster of four 16-storey blocks of maisonettes arranged around a central service tower to vertically recreate the Victorian terrace.

In 1991, a Dangerous Structures Notice was served on the reinforced concrete structure and the following year the residents of the 56 maisonettes and eight studio flats were moved out as Tower Hamlets Council prepared to demolish the building.

But in 1993, the block was given grade II* listed status. Unable to afford the cost of repairing it, the council sold the structure to a property developer.

A £4 million refurbishment, designed by Munkenbeck+Marshall, followed in 2001, which included construction of a new entrance foyer and conversion of the eight top-floor maisonettes into penthouses (the scheme won a RIBA Award in 2002).

Munkenbeck+Marshall also identified the potential of the water tank room for conversion to living accommodation, after the water tanks were relocated to the building’s basement.

Although planning consent was granted for its conversion, but the tank room project did not form part of the original refurbishment works and it remained empty until it was turned into a home by Brian Heron and his family. 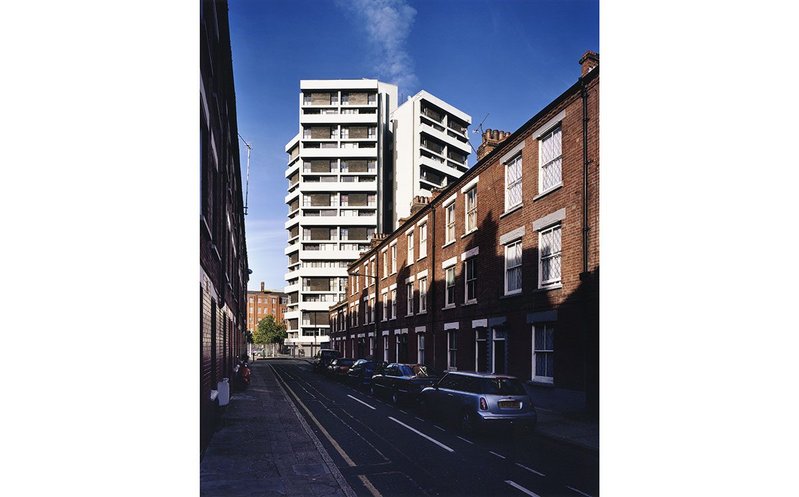 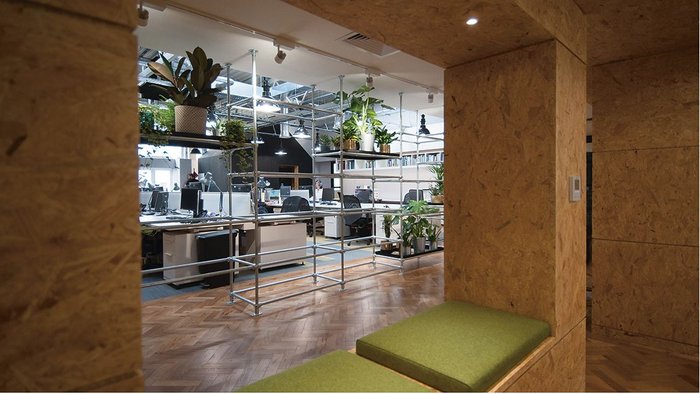 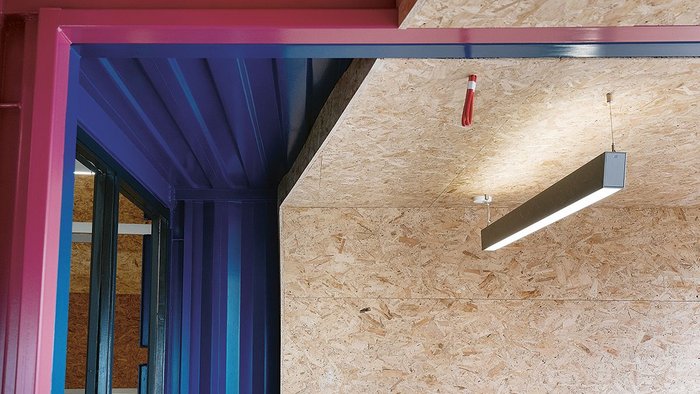 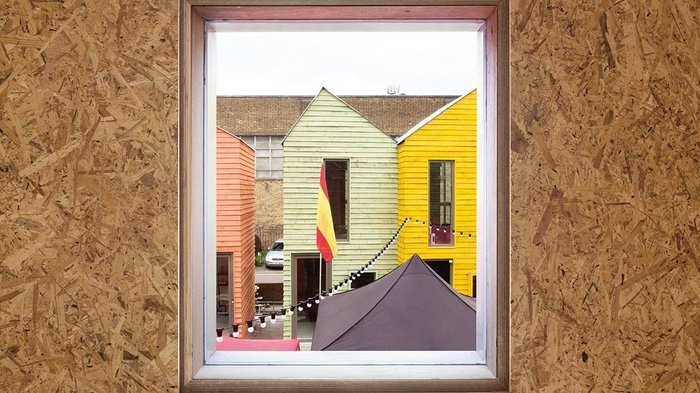