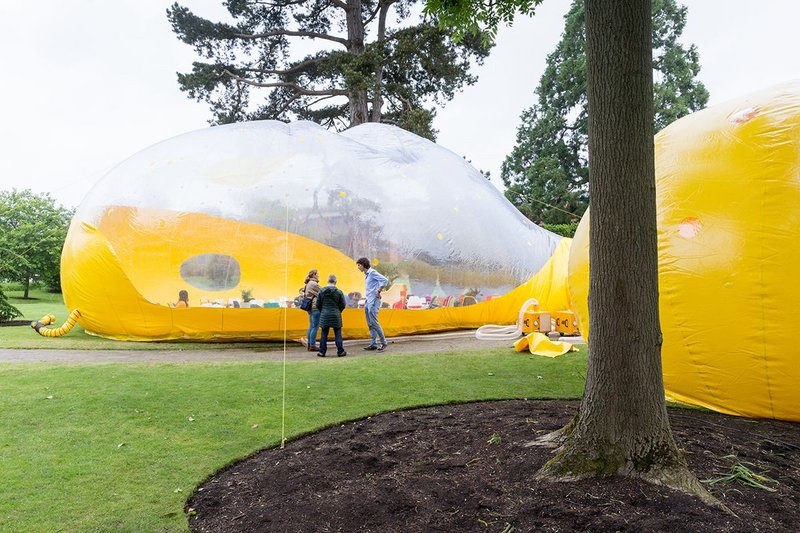 Interest in pneumatic architecture may have deflated somewhat since the late 1970s, but advances in the technology could give it a lift, claims the Spanish architect behind Second Dome, a bubble-shaped living structure being deployed in London during October.

Second Dome is a reconfigurable inflatable space that can be transformed ‘within minutes’ from a single 65m2 bubble to a multi-room structure covering over 400m2 and up to 8m high.

Designed by DOSIS Architecture for creative workspace provider Second Home, the structure will be inflated for the first time at London Fields in East London on Saturday October 1, to host free community events for local families and children. It will then be transported to locations across the city to host various events, including an interview with architect David Adjaye and Nest founder Tony Fadell.

Second Dome consists of four separate plastic membranes that can be connected together in different configurations, using zips surrounding doorway openings. This enables a high level of adaptability to suit different events or site limitations.

The air-supported structure is fast to assemble, has few solid components – apart from tension cables and a steel entrance door – and at less than 1mm thick, requires low levels of energy to fabricate.

Advances in computer simulation and materials science allowed for a high level of design freedom, explains Ignacio Peydro, director and founder of DOSIS: ‘Plastics today are far more durable and easily manipulated than in the ‘70s, and computer simulation is transforming the way pneumatic architecture is designed. Although we were limited to spherical shapes on Second Dome, we were able transform and deform them based on real-time structural and tension analysis, using form finding and simulation to change the way the membrane behaves.’

Fears that the structure might float away, as tragically happened in County Durham in 2006 when artist Maurice Agis’ Dreamspace inflatable was blown 70ft into the air by a gust of wind, killing two women, were overcome by incorporating high volume water ballast tanks and tension cables that secure it to the ground. In addition, simulations helped reduce the height of the largest element and improve aerodynamics.

DOSIS’ interest in pneumatic structures dates back to 2005, when it patented the concept of an inflatable facade with an integrated fire escape for high-rise buildings. The outer skin of the double membrane would fill with helium and detach from the building in an emergency.

The first pneumatic structures were devised by Walter Bird in the late 1940s and reached a peak with the US Pavilion at Expo 70 in Osaka, where the first longspan, cable stiffened pneumatic dome was erected.

‘We think there is going to be a renaissance of this type of architecture because the way we design is far more powerful than in the past,’ says Peydro. ‘Other designers are working on this and there is increasing interest in the advantages that pneumatic structure have for a range of different uses.’