Green roofs don’t like being kept waiting for installation

VerdiRoof installation on the café in Sussex.

With green roofs, timing really can be a matter of life and death for the major building component.

Getting this wrong is the most common pitfall for green roof installations, especially when the contractor is new to the process, according to Steve Vincent, technical director of green roof specialist – and SIG partner – Verdico. It is crucial, he says, that the roof is ready with necessary access for the installation team when the green roof kit is delivered.

‘You need a lot of planning – when you’ve done three or four you get to know when to order the sedum,’ he says. ‘It should go in the same day as it arrives but can keep for up to 48 hours. In the height of summer we prefer to install straight away.’

Experience is invaluable at assessing how the foibles of the site and build conditions might affect the installation programme.

‘I don’t think there’s a more difficult thing to do on site,’ Vincent says, adding that weather is an additional complication. While rain is fine and snow no problem unless it lies, wind can hold up the process and affect the method of installation.

‘You’re on a critical path and you have to make sure that everyone – the main contractor and the associated trades – understands that you are the priority at that point. Most trades aren’t used to dealing with anything that’s alive!’ 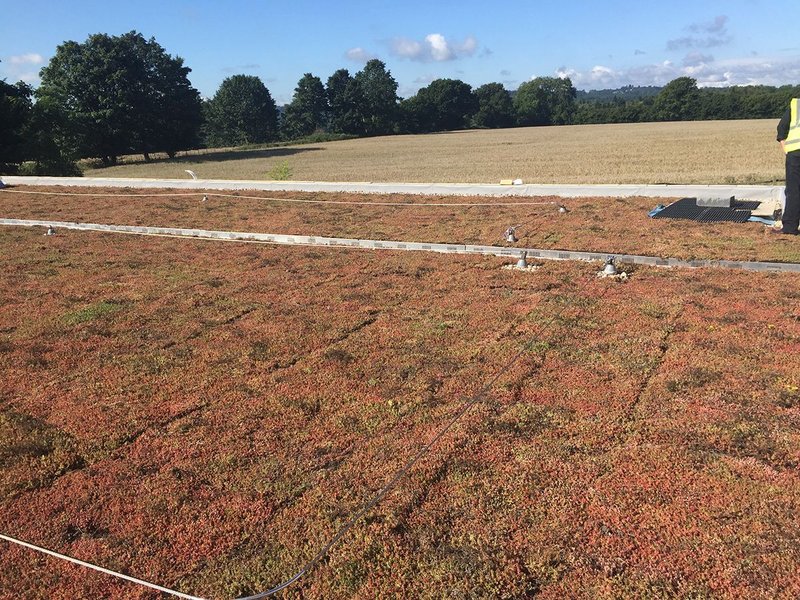 Certainly planning was the main challenge for foreman Aaron Scanbrett of GR Regan Roofing, installer of an extensive sedum roof at a recently completed café pavilion on a country estate in Sussex.

For this 422m2 application, Verdico supplied the VerdiRoof system, which took a week to install on the single storey building plus a further two weeks of watering.

‘I’d never laid a green roof before but found the system really straightforward to use after the green roof supplier had showed us what
to do,’ says Scanbrett. ‘The only tricky bit was the timing.’

The multi-layer VerdiRoof system was installed over FDT’s Rhepanol single ply waterproof membrane. The system consists of the Verdi-Drain moisture retention layer overlapped by 100mm followed by a drainage and reservoir board and a filter layer. The growing medium was laid above this and raked before the sedum blanket was rolled on and watered.

Finally, pond-washed pebbles were laid around the perimeter of the roof and around the gutter to form a firebreak. Guy Regan of GR Regan Roofing says getting these and the other green roof materials up on to the roof was particularly labour-intensive, but the end result will be worth it.

‘Green roofs are one of the best systems as they’ll last indefinitely – as long as the waterproofing is laid properly – because the roof isn’t exposed to the elements,’ he says.

Timing isn’t the only watchpoint according to Vincent, who says architects should avoid green roof systems that use just drainage boards rather than drainage and reservoir boards. The latter reduces the chance of the plants failing.

‘A drainage and reservoir board will allow excess water off but also holds a chamber of water to evaporate back through,’ he says, adding that some green
roof companies cut corners by failing to have multi-purpose boards.

‘Architects and specifiers need to be vigilant and should only specify the best components. It might sound daft, but why would you specify a drainage only board that does not hold water in reserve for the plants once the moisture in the growing medium has been used up?

‘The GRO and FLL Guidelines are in place to help specifiers quiz the performance data of the green roof system,’ Vincent says.