What: Birmingham Institute of Forest Research Where: Norbury, Staffordshire 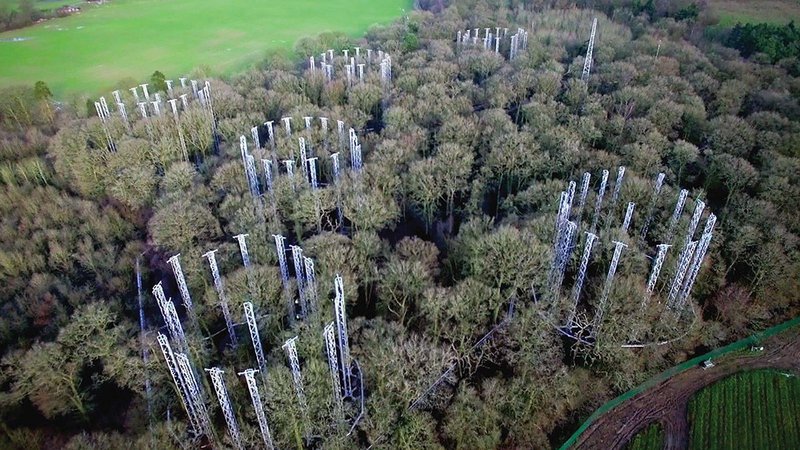 CO2 levels are increased in specific areas of the wood.

Most people now accept that climate change is real and increasing levels of carbon dioxide (CO2) in our atmosphere will have an adverse effect on our planet, but the exact impact is unknown. An experiment is under way in Staffordshire to try to quantify its effects.

The Free-Air Carbon Dioxide Enrichment (FACE) experiment is being run by the Birming­ham Institute of Forest Research (BiFoR), which was set up by the University of Birmingham.

Its aim is to investigate how the world’s forests will respond to future increases in CO2 by recreating these conditions in three areas of a 160-year-old woodland.

The £10.4m facility that will artificially raise the levels of CO2 has been built by West Midlands-based contractor Shaylor Group at Mill Haft Wood in Norbury. It consists of six cylindrical, 30m diameter metal ring structures that resemble gasholders.

Each structure encircles a segment of woodland and supports the pipework needed to deliver the gas.

The system has been designed so that while the trees inside the ring can be immersed in higher levels of CO2, the rest of the forest should remain largely unaffected.

On average a total of 15 tonnes of CO2 a day (over a month this equates to one return transatlantic flight) will be used to maintain the artificially high levels within three of the structures, while the other three will act as controls.

The 10-year project will allow scientists to test the resilience of a mature forest to the concentrations of atmospheric carbon expected by 2050. 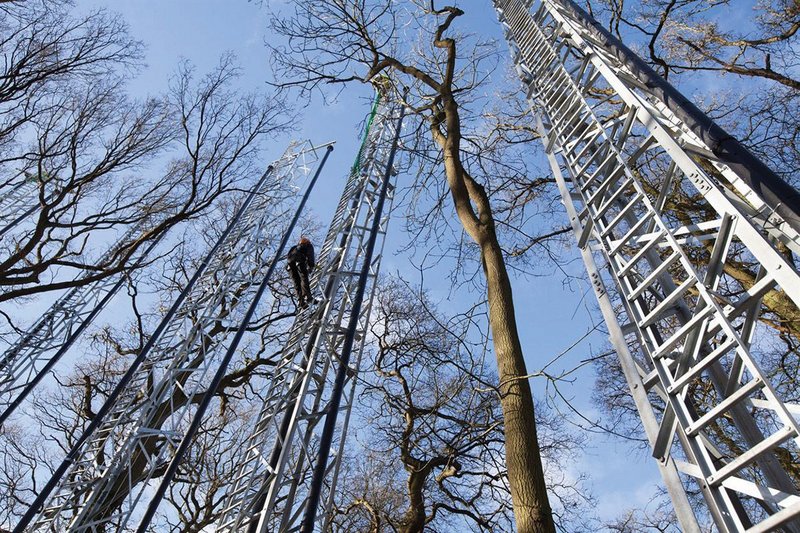 The steel gantries have no concrete foundations or guy ropes and were installed by helicopter.

They will be able to take measurements from deep within the soil and from above the tree canopy from sensors supported on the ring structures.

The project is being run by Professor Michael Tausz, who believes the research will produce concrete evidence about the ability of temperate woodland to mitigate future climate change.

‘This is an unparalleled opportunity to really gain an insight into the reality of climate and environment change in this state of the art facility,’ he says.

‘BIFoR FACE is a technological marvel. Built into existing woodland without the use of concrete foundations or guy ropes, the facility gently delivers its enriched-CO2 atmosphere to 30m patches of 160-year-old oaks.

‘The impact of changing CO2 should show up in the leaf chemistry of exposed trees within days, and in the soil within weeks,’ Tausz predicts.

‘Within three years, stem growth, canopy structure, and a host of other structural forest elements should be different in the patches exposed to elevated CO2.’

The Staffordshire project is the second of these experimental facilities to be built – a sister forest FACE was set up by the University of Western Sydney in 2012.

Birmingham University wanted to ensure that  the established woodland was not damaged in any way by the experiment, and returned to its original state after the experiment concluded. This meant the facility had to be built in a non-traditional way.

The 102 prefabricated, 25m high latticework masts were installed by helicopter so as not to disturb the site.

Each pylon was lowered onto steel grillages to avoid dropping deep piles into the ground. This will allow them to be easily removed when the experiment comes to an end.

The 1,000m of pipework that runs through the forest to distribute the CO2 to the network of masts has also been constructed without drilling deep piles.