Who knows whether the amazingly ambitious Chichester Festival Theatre, the brainchild of local worthy Leslie Evershed-Martin, would have survived more than a few months without Sir Laurence Olivier at the helm? Securing him as its first director in 1961 – an international celebrity relentlessly pursued by paparazzi – was an extraordinary coup for what was a purely local initiative. But Olivier was at a bit of a loose end. He had failed to raise the money for a fourth Shakespeare film and he’d had his fingers burnt running West End theatres in London. His second wife, Joan Plowright, was pregnant with their first child. He wanted to strike out in a new direction. ‘This new theatre, affording new shape (for the last 400 years anyway), new ideas, new functions, new thinking just at this moment in time seemed to me just exactly what the dear, kind doctor had ordered. Apart from creating my own films I had known no job in all my life’s work equal to that of forming a new theatre group,’ he wrote a decade later. 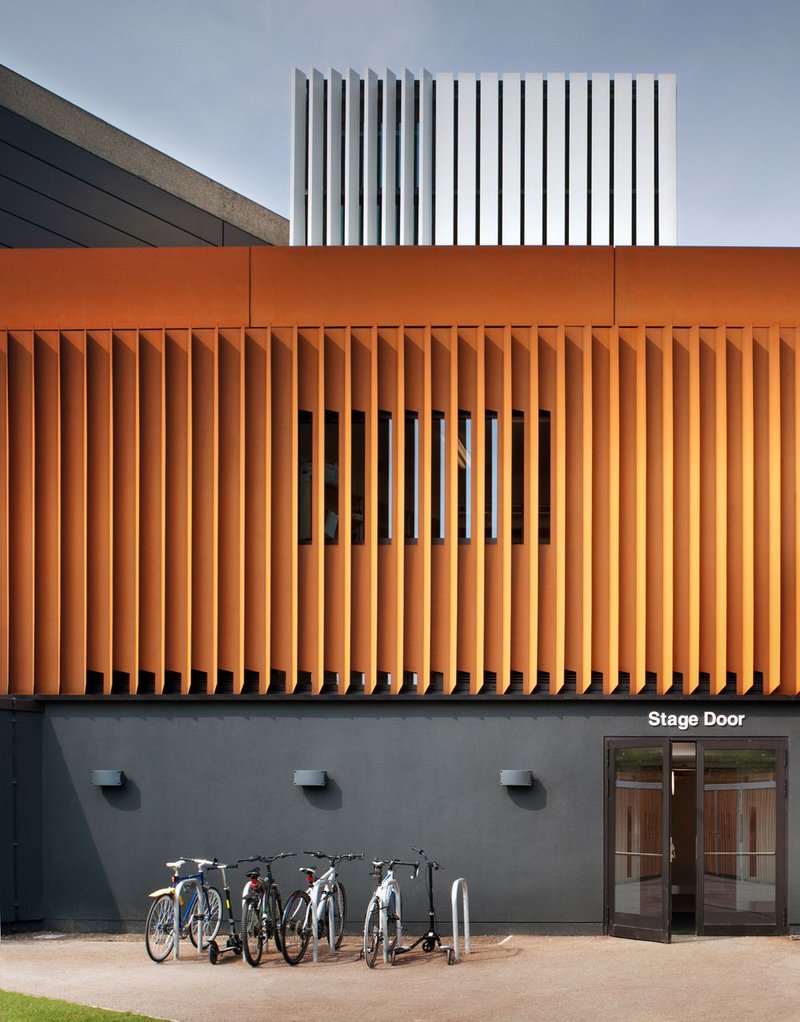 Not that he was uncritical of the 1959 design by Powell and Moya, itself heavily influenced by the ‘Shakespearian’ thrust-stage festival theatre of Tyrone Guthrie in Stratford, Ontario (a city of almost exactly the same size as Chichester). The design had a strange geometry that perplexed Olivier.  ‘I found it difficult to feel altogether comfy about the almost aggressive cleanness of the hexagonal shape of the theatre, which seemed to suggest rather a clinical attitude with its broad, arrowhead statement of a stage.’ And he hated the way the architect had designed no backstage area, assuming the actors would enter and exit through the audience. How was that meant to work for Romeo and Juliet, he demanded? But he took the job anyway. Building was only just starting on site, and was meant to be operational in a year. Shortly afterwards Olivier found himself signed up to direct the fledgling National Theatre too. Chichester thus became the testing ground for the National, in both architectural and theatrical terms. 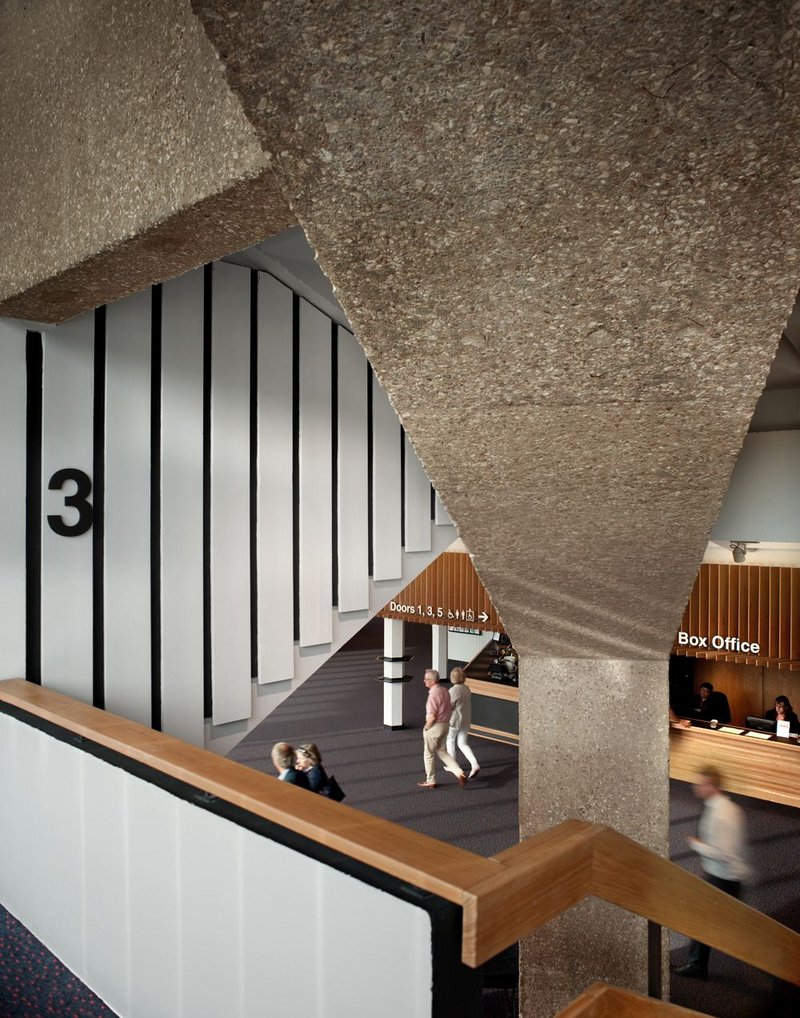 Proud of its rough concrete, the foyer is decluttered. Credit: Philip Vile

It also became a testing-ground for ultra-low budget design, as it was funded by public subscription. It came in at just £110,000, which Philip Powell later remarked was ‘about a 10 times lower price than is normally expected in a theatre of about 1400-1500 seats.’ But that meant that a lot of stuff normally associated with theatres – flytower, backstage area, offices, all but basic dressing rooms – were just left out. The auditorium was lifted into the air on stilts to allow these rudimentary amenities to be tucked underneath. The roof was the first in Britain to be supported on tension cables, which also held the whole structure together. ‘If the public approved of the theatre and the productions then it would be possible to add the other improvements at a later date,’ wrote Evershed-Martin. 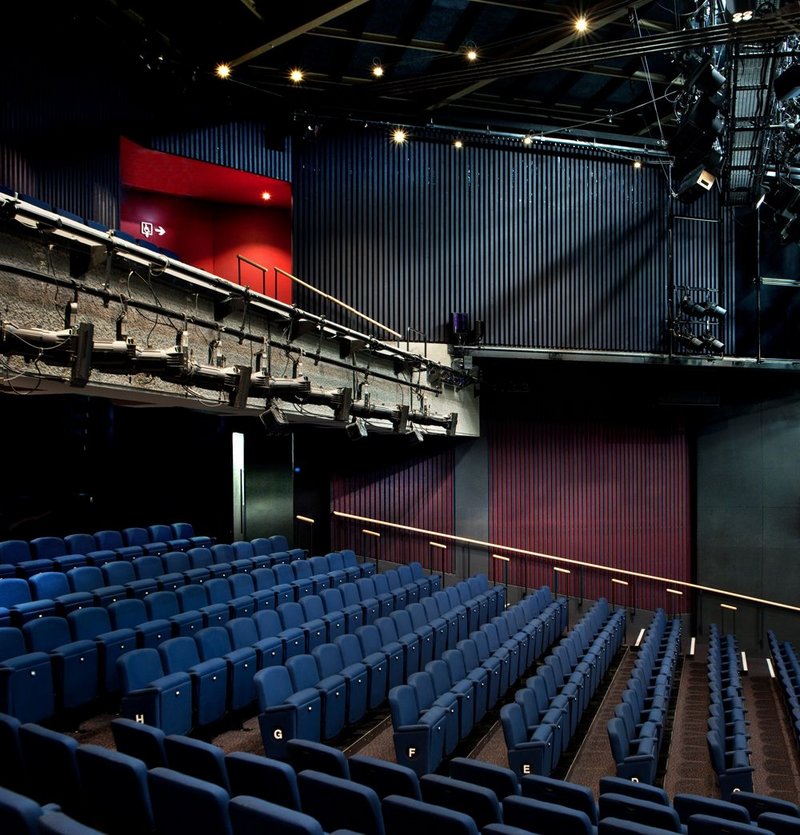 In the auditorium, seating is rearranged with a steeper rake. Credit: Philip Vile

The subsequent physical history of the theatre has been all about cramming in or grafting on the missing facilities, with the usual unsatisfactory results. And so came the inevitable ‘later date’ when the thing had to be done properly, not least because the original exposed concrete structure was also starting to flake. Hence the total overhaul and extension just completed by Haworth Tompkins at a construction cost of £13m.

Today Powell & Moya’s building is grade II*-listed, which meant proceeding carefully – not that Haworth Tompkins is in the habit of treating existing buildings disrespectfully. The architecture wouldn’t have taken a flytower, for instance. Instead, this is a textbook exercise in de-cluttering and re-focussing. Of course, it all comes down to detail but the overall strategy – to restore the building as much as possible to its original appearance, find more foyer space, improve the rake of the auditorium, insert lifts, replace all the HVAC services and add a large back-of-house extension in as deferential a manner as possible – is as logical as could be. This contract – a rare traditional one – consisted of 55% refurbishment and 45% newbuild. 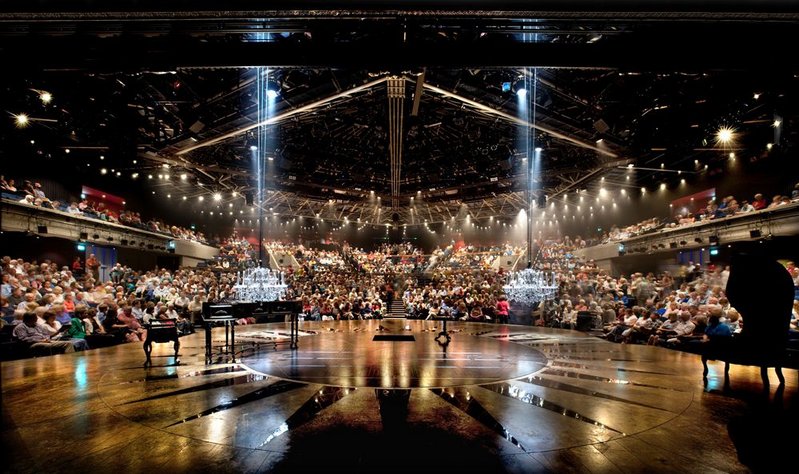 The auditorium seen from the stage during a performance. Credit: Philip Vile

Nobody could pretend that this was ever a pretty building externally, and its (repaired) rough concrete is more motorway service station than cultural centre. But it has verve and poise, sat there in leafy Oaklands Park on the northern edge of the town. Its original architects were steeped in the ethos of post-war austerity and had of course achieved a miracle with the Skylon at the Festival of Britain. Theirs was the making-do generation that discovered the cost-cutting benefits of large-span engineering techniques developed during and after the Second World War (consider also its contemporary, the Commonwealth Institute in London by RMJM, of similar economy and energy). Thus the structural engineering solution of Charles Weiss and Partners became an important part of the theatre’s functionalist aesthetic, and this – a raised concrete hexagonal bowl, its rim held in tension by criss-crossing steel cables, visible within the auditorium – remains as vigorous as ever.

Engineering aside, you wouldn’t design a theatre this way nowadays – we know more about acoustics now, and later theatres such as RHWL’s Crucible in Sheffield (1971) had a much better thrust stage auditorium. For all its deference to Guthrie, Powell and Moya was somewhat half-hearted about its audience wrap, still weighting it mostly towards the front. And Olivier was right – by designing the auditorium and stage from a point of the hexagon rather than a flat side, a geometric tension was established that did not serve theatre especially well. This also, as Steve Tompkins of Haworth Tompkins points out, led to other oddities such as a key structural column placed at the point of maximum inconvenience, directly behind the stage. And the orientation is odd – facing sideways, away from the historic centre, and separated from it by a large municipal car park. 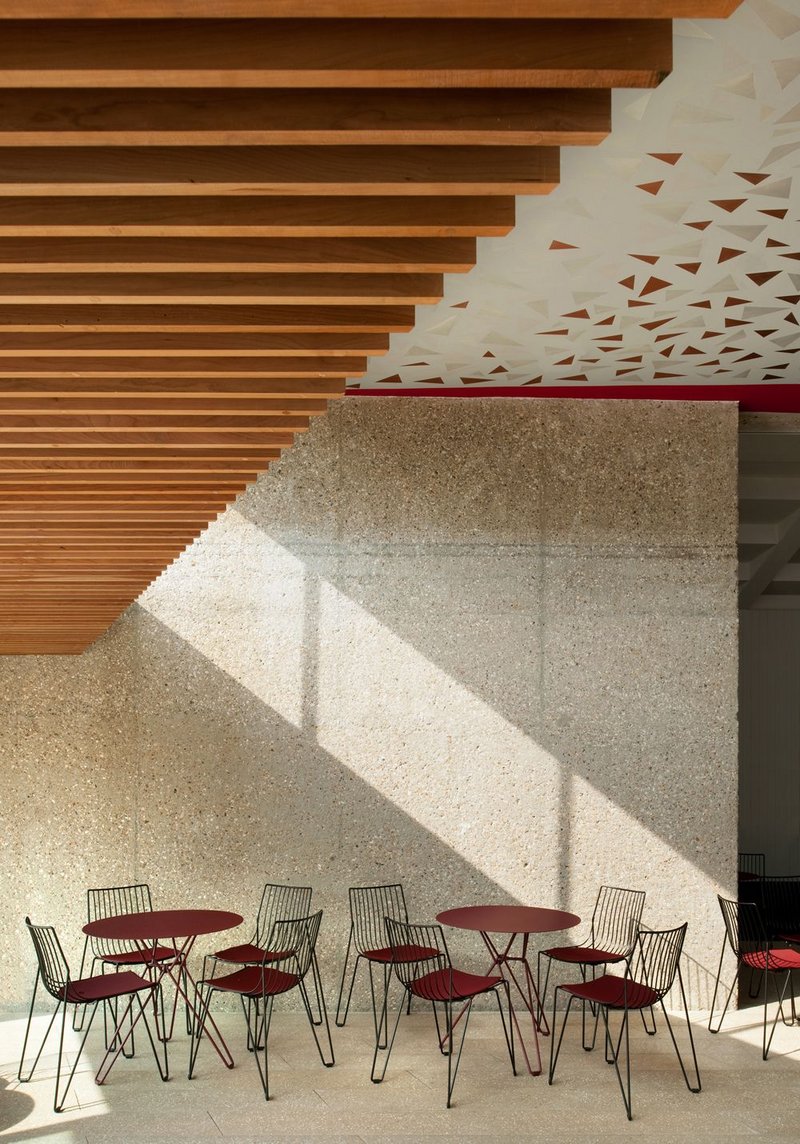 The cafe and bar sit in the new triangular 'ears' on the main building. Credit: Philip Vile

No point trying to reinvent or reposition the hexagon. Instead, Haworth Tompkins has gone with the geometrical flow. Its new extension replicates it exactly, on plan stretching the hexagon into a lozenge. This provides a double-height scene dock (and get-in and scenery lift) plus offices (the director’s is right in the prow) and some of the best dressing-rooms in the business on the first floor, overlooking the parkland.

In elevation, however, the original hexagon stands proud, with the new extension set lower and clad in Cor-Ten steel, its fenestration matching the dimensions of the original. The Cor-Ten revival is fast becoming an architectural cliché, but here, as it darkens over time, it will visually retreat still more, especially as new screening landscape develops. As to the original building, just about the only later additions adopted are two little low ‘ears’ of triangular foyer extensions, one each side, which are rebuilt higher to bring in more daylight, their ceilings decorated by Haworth Tompkins’ regular collaborator, artist Antoni Malinowski. These are a bar and café. 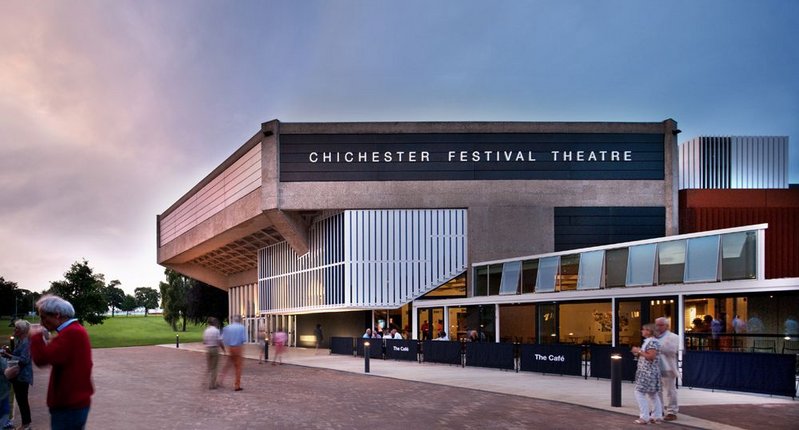 The theatre approach returns to its original appearance, plus the appearance of low-key ‘ears’ of café and bar wings. Credit: Philip Vile

One could write at length about the myriad subtle changes the architect has made to tweak the original and bring it back to life. In essence the strategy, successfully pursued, is for the audience to feel immediately at home, as if nothing much has changed. It has, of course, in foyer and auditorium alike. This is a working theatre, not a museum of postwar theatre design. But Haworth Tompkins’ approach has always been to respect and respond to the existing architecture. Just as the original Chichester Festival Theatre proved to be a curtain-raiser for the later National, so this job is completed just before Haworth Tompkins’ much larger reworking of that magisterial building. We shall report on that soon. 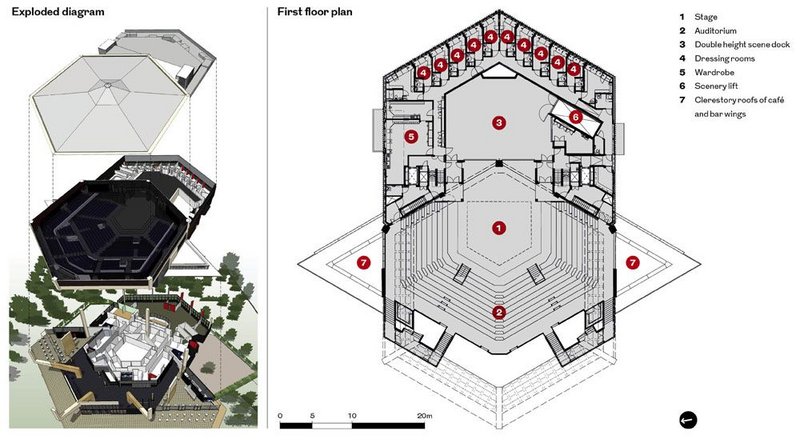