Culture is alive and kicking in the City of London, where three new auditoria are making a bid for public attention

At a cost of £89m, this is one of the most significant cultural developments in the area for years

The Guildhall School of Music and Drama has been based in its purpose-built Barbican home since 1977, but has never really been on the performance-going public’s radar. This is set to change however. Almost by stealth, the school has built itself three new auditoria including a sizeable concert hall, to be frequently open to the public, on the same street as the main entrance to the Barbican complex. A large new theatre foyer at street level leads you to the 600-seat concert hall, a 220-seat ­theatre and a 120-person studio theatre. What you won’t see so much of are the ancillary spaces of a performing arts school, from rehearsal rooms to administrative offices. At a cost of £89m, this is one of the most significant cultural developments in the area for years. 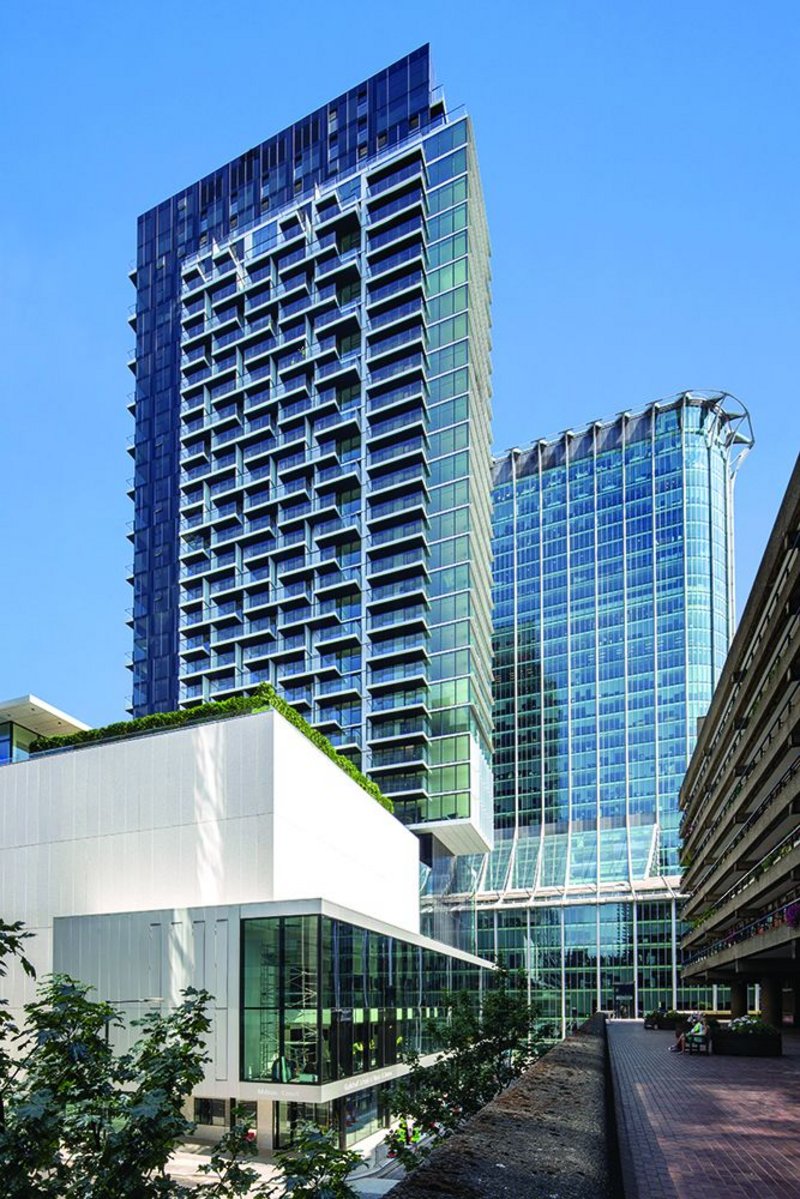 Show me the money: the new residential tower, the Heron, unlocked funding for the music and theatre school (foreground)

In the British way, its genesis was not straightforward. It has come about as the ­result of a property deal, reminiscent of those 1960s schemes which saw new theatres buried beneath office blocks as planning gain pay-off. This scheme is much smarter – the main auditoria are slightly above, rather than beneath, street level – but the principle is the same. By allowing a developer to build a tower of very upmarket apartments that sell for eye-popping City prices, the cash was leveraged to build the school’s new facilities. Between them the developer, Heron International, and the Barbican’s owner, the Corporation of London, have put up £75.5m of the overall cost. 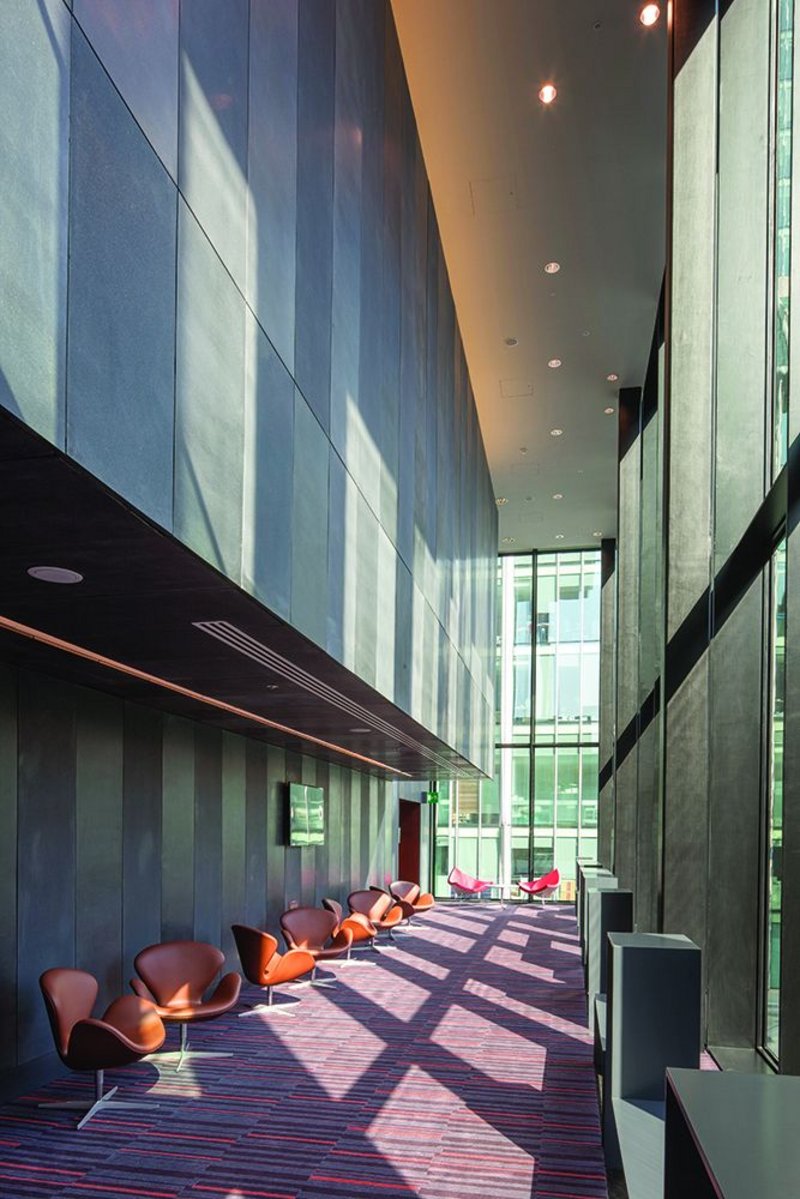 There is a distinctly corporate look to the concert hall foyer.

There are two firms of architects involved. David Walker Architects has worked on schemes here since the late 1990s, when an office development was mooted on what had been a fire station site, with some new facilities for the school included. That scheme was ditched, and Walker proposed a more slender residential tower that was adopted by both City and Heron. Following the usual lopping-off of upper floors that London planning always seems to require in the vicinity of St. Paul’s, this scheme – complete with new music school – got planning permission in 2006. At this point, the arts team of architect RHWL was brought on board to develop the Guildhall School part of the development and to be executive architect for the tower.

Strolling round the scheme with Walker and RHWL’s Barry Pritchard, it quickly becomes apparent how surprisingly large this scheme is. In mid-20th century tower­-and-podium manner, the dark tower inter­locks with the pale box of the school and its (very corporate-feeling) long glazed foyer. Inside, an atrium runs from top to bottom of the Guildhall complex, naturally toplit through a glazing slot. The freestanding concert hall is a ­relatively conventional broad coffin-shape, the main theatre (shoehorned ingeniously into the bottom of the tower) is a no less conventional horseshoe-shaped multi-­tiered auditorium to teach the art of voice projection in the real world: though the upper tiers are very shallow. Other theatre and rehearsal spaces sit beneath the two main auditoria. Arup Acoustics and Theatre Projects contributed. 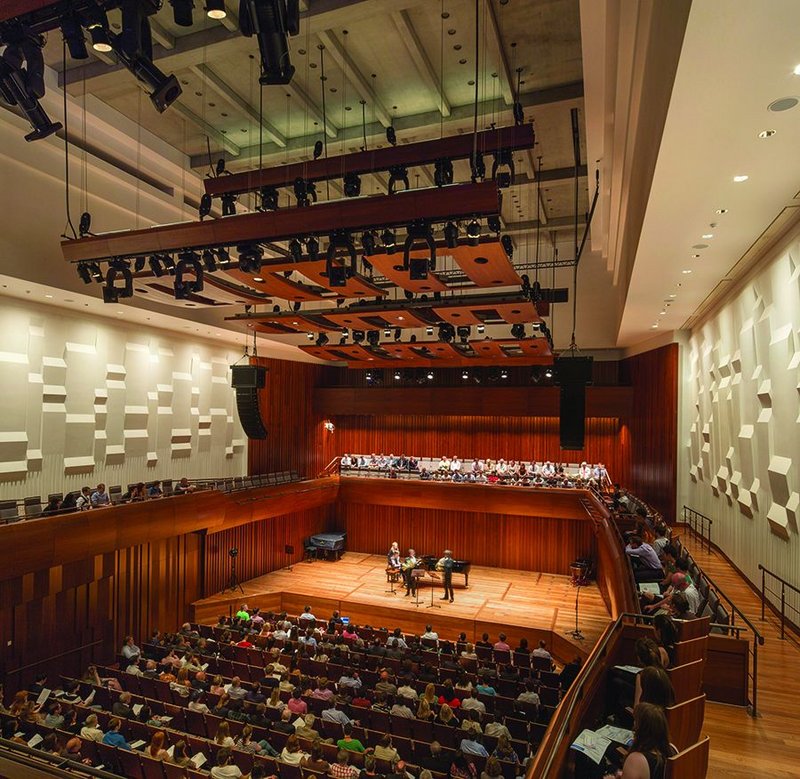 The 600-seat concert hall is a significant addition to the Barbican’s tally of performance spaces.

For all its transparency, from outside in daylight you could still be unaware that theatres lurk inside, so glassily restrained is the architecture: one hopes that the coming and going of students will provide the necessary buzz. Lit up in the evenings, however, it’s a different proposition. Culture has elbowed itself just that little bit deeper into City life. 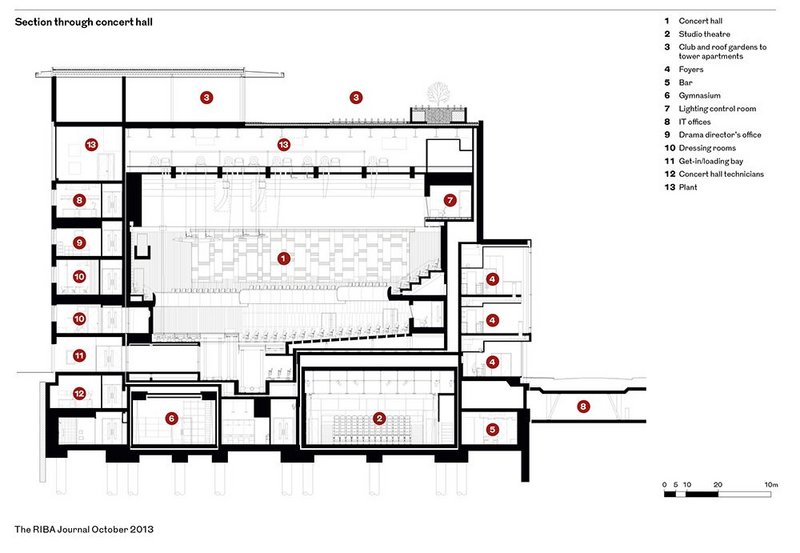