Wide-angle view of the Hydro's steel frame roof structure. Once the Kalzip roof has been added, the four steel trestles in the centre will be removed.

It’s not often that an architect forms part of an entourage, particularly Kylie’s ‘Showgirls’ tour, but that’s what happened to the Foster + Partners design team charged with the design of Glasgow’s newest events venue, the £80m Hydro Arena, which topped out last month. The backstage tour formed part of the designers’ fact-finding mission looking at events venues both in the UK and abroad to get an understanding of the logistics and processes behind cutting-edge events management.

The SECC Hydro Arena opens next September and, with a capacity of 12,500, will be one of the largest indoor arenas in the country. Adjacent to Fosters’ 1997  ‘Armadillo’ on the banks of Glasgow’s Clyde river, the Hydro gives Scotland a state-of-the-art venue, capable of dealing with the ambitious nature and demands of large scale concert tours. The circular concrete structure, with its proposed ETFE facade, is now crowned by a huge 123m diameter inclined steel space frame roof, bearing off its raked concrete fin walls. The dome’s design is the result of a combination of design intent and construction logistics, and partly stems from the fact that  during construction it shifted, in engineering terms, from a traditional beam structure to a pure dome. Now, at over 40m high, the roof is set to be a curving counterpoint to Glasgow’s skyline of finely sharpened steeples.

‘We realised that the seats coming around either side of the stage had the worst views, so we moved them to the centre where views were better. By default, this generated the elliptical form’

As associate partner James Edwards, who worked on the initial design stages, explains, the client, SECC, wanted a bespoke venue that could cater for big modern events, which directly affected the section of the building from the outset. The relatively recent trend to incorporate VIP boxes with the best views at lower levels forced a change to the ideal straight raked seating arrangement, says Edwards. The section now steps at the point where the VIP suites are inserted a third of the way up the section. Another basic move was a shift from a circular plan and roof form to a slightly elliptical one. ‘We spent a lot of time ensuring we optimised the sight lines for the  maximum number of people,’ recalls Edwards. ‘The circle shape has natural efficiencies, but we created a hybrid based on the classic form of the Greek amphitheatre. We realised that the seats coming around either side of the stage had the worst views, so we moved them to the centre where views were better. By default, this generated the elliptical form.’

The roof sitting above it went through about 20 iterations, the architect looking at both materials and constructional approaches. It had originally considered a concrete grid shell roof and even timber. ‘We were looking at a lightweight structure, but one that didn’t distract from the stage’, says Edwards. ‘We did look at timber, but one of the main roof concerns was expansion due to internal heat build-up, and the client was concerned that a timber structure would creak as it did so.’ But he adds that while timber fabricators disproved this possibility, the client remained adamant that other approaches be investigated.

Foster and Partners instead opted for a steel space frame to construct its shallow conical dome. Its design was finessed using the firm’s Specialist Modelling Group to create a 3D Microstation model from which 2D information could be extracted for construction purposes – although Fosters partner Ben Scott stresses that the modelling technique stopped short of BIM. ‘Using the SMG meant we could develop the design by liaising with all in the team to establish the parameters that would modify the roof design,’ he says. ‘In this case we were looking at maximum spans that could be easily transported on site, or optimum weights of trusses. Here, for instance, a parameter was how to do a Kalzip roof without having to construct a secondary deck on top of the trusses. The run length of a Kalzip panel therefore became a critical design dimension.’ 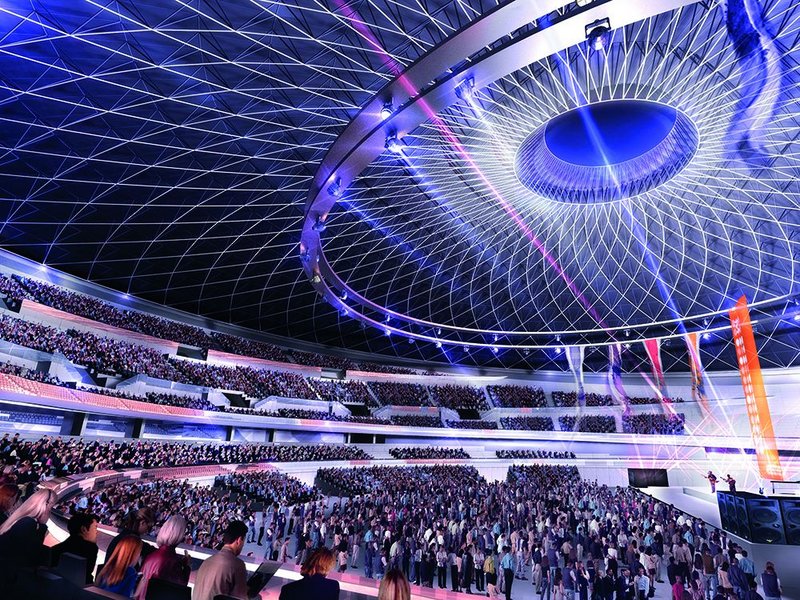 An initial visualisation giving a sense of the intended visual effect of the roof structure’s lower chord. The oculus as illustrated was not adopted in the final version of the design.

The was also a desire to minimise structural weight. Ian Lumsden, partner at engineer Arup, describes the final result as efficient – weighing in at about 120kg/m2 it was reasonably light for a long-span structure – which was partly due to the construction method and sequencing. Each of the roof’s 16 trusses has an upper and lower chord, 2.7m deep and weighing 60-80 tonnes. ‘We wanted to keep the top chord structural and the bottom one more aesthetic. It is a radial arrangement of beams, but the lower chord creates in effect a fine spiral arrangement,’ says Lumsden. The subtle spiral of the lower chord was the architect’s decision, intended to avoid distracting audiences, especially in the upper tiers, from the action below on stage. Connecting the upper and lower chords are 900 cast steel nodes configured in 15 different ways – a result of SMG’s design optimisation processes.

Construction logistics was key – Lumsden explains that the 41.5m long trusses are connected to a 330-tonne, 40m central circular space frame section that was bolted together on the ground before being hoisted up a specially constructed 4-legged steel trestle. ‘It was literally jacked-up like an umbrella- opposing trusses were then constructed in pairs attaching to this central section,’ he says, adding, ‘The interesting thing was how the structure changed in nature as it was built. In its temporary condition, it was not acting as a dome structure, but as distinct trusses.’ To take account of this, the eight temporary raking props had to be constructed to carry the loads of the trusses as they are attached to the circular steel element, using a 600-tonne jib crane. These were specially designed with sliding sleeves that allow the props to contract telescopically as load is imposed. The props will only be removed once the roof’s secondary structural steels connect to the trusses and structurally it acts as a dome.

‘There are two points that stop the roof sliding laterally – one is a fixed datum, so all other expansion and contraction movements are relative to it. You have to let a structure this size breathe’

Around the perimeter, connecting the trusses, a huge ring beam holds the dome structure together in tension, bearing down on the main in-situ concrete fin walls – that also support the raked seating. The roof impinges on the fin walls at 56 points on the circumference, sitting on bespoke steel bearings. Lumsden explains that these deal with structural movements over the roof, saying: ‘Movement needed to be accounted for. When the arena is fully occupied a lot of heat is generated and therefore structural expansion. We had to divorce the roof from the concrete fin walls to allow for it. In addition, because the roof is tilted, it is also subject to wind loading. To deal with these forces, there are two points that stop the roof sliding laterally – one is a fixed datum, so all other expansion and contraction movements are relative to it. You have to let a structure this size breathe’. Lumsden adds that the lateral forces were significant enough to force some logistical decisions – one of which was not to install the roofing on the jacked-up section of the roof at ground level, despite health and safety and programme benefits of doing so.

Fosters’ piece de resistance, its proposed Pantheon-like glazed oculus, was a casualty of acoustic concerns and engineering. Scott says that despite acoustic insulation in the roof build-up, the opening would have had adverse effects on sound levels in this residential area. Its non-central positioning would also have been a headache for Arup’s Lumsden, as element analysis demonstrated that ‘while its off-centre position looked great, it changed the size of all the segments, which meant constantly changing loads and non-standard nodes. It became a cost and logistics issue.’  As it is, the infill steel is created by steel noding out to avoid congestion of the radial steels.

Not that either of these considerations would bother modern day concert promoters, with shows are becoming only more daring and ambitious. And with the main body of the roof’s structure painted black, it will only be the white-painted lower chord, its structural filigree spiralling up to the apex of the dome, that will prove to be the understated backdrop to the Hydro’s roof-raising main event.