With impressive and active alumni, and a city that becomes the students’ lab, Liverpool architecture school is finding people come a long way to join it 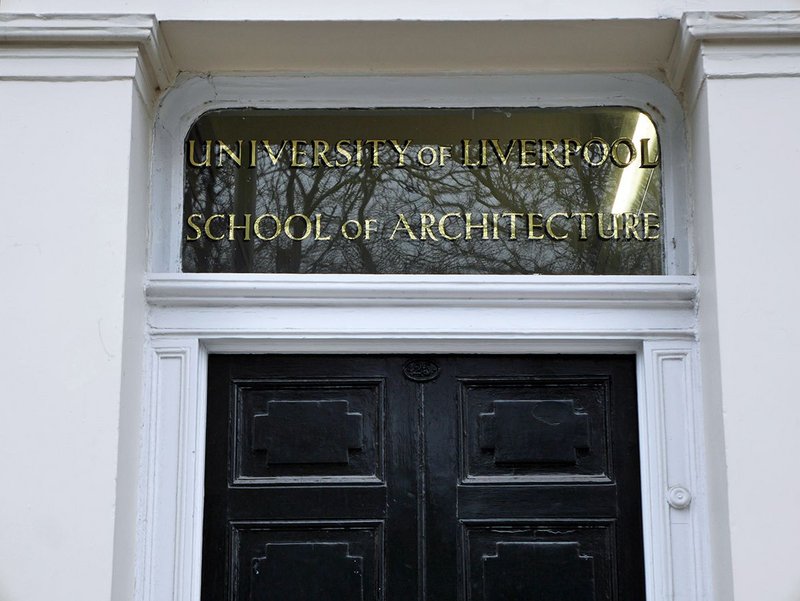 Up the hill from the centre, across Hope Street with Frederick Gibberd’s space-capsule Roman Catholic cathedral to your left and the brick chimneys of Haworth Tompkins’ Stirling Prize-winning Everyman Theatre to your right, and you enter the heart of Liverpool’s university quarter. Up there on Abercromby Square you find an old-fashioned front door in a row of plain late Georgian houses, as famous in its way as the AA’s earlier, more elaborate version in London’s Bedford Square. Just how many students and teachers have passed through that door over the years?

The numbers have increased sharply since the Russell Group university went all out to attract Chinese students, in 2006 establishing a joint Anglo-Chinese university with Xi’an Jiaotong university in Suzhou (neighbouring Shanghai), known as XJTLU.  The architecture school is closely involved with this so, since 2012, numbers in the second year always mushroom with the arrival of the Chinese cohort who have opted to do the final two years of their course in Liverpool. This, along with all the other nationalities typically present in a school of architecture, gives the place a cosmopolitan feel. There’s been inevitable pressure on space and facilities but that’s now being put right in an ingenious way: the school is running an international competition to extend its campus and the students are directly involved in it as part of their studies. The school has always been famous for using its host city and its buildings as its raw material – though like many of its peers it also has a small outpost in London.

Its history is important: founded in 1894 it may not be as venerable as London’s Bartlett, say, but was the first university architecture school in the country to offer RIBA accredited degrees (from 1902) and since then it has gone on to count six Royal Gold Medallists among its graduates and staff, including Jim Stirling, Patrick Abercrombie, Maxwell Fry, William Holford and Colin Rowe. In the early years (1904-33) its guiding spirit was another eventual RGM, Charles Herbert Reilly, who brought the school to national and international prominence. In his final year as head he co-designed with former pupils what is still the school’s main studio, the Leverhulme Building, in the ‘jam-factory’ industrial-modern manner, reworked and extended in 1989 by King McAllister. The school’s more recent alumni include Jonathan Falkingham of Shedkm/Urban Splash and Jim Eyre of Wilkinson Eyre, twice a Stirling Prize winner and now a visiting professor along with Alan Dunlop, Nicholas Ray, Ian Ritchie, Roger Stephenson (also an alumnus of the school) and Michael Wilford.  Since 2010 the school has been part of the university’s School of the Arts, alongside English, music, philosophy and communication and media.

For years the school was associated with the formidably knowledgeable and well-connected David Dunster who joined as a professor in 1995, was head of school from 1996 to 2000, and continued working there until his retirement in 2010. Doing crits with David in attendance in the big green-floored studio – followed of course by a congenial lunch or supper – was an education in itself.  Today there is a more collegiate air about the place. The head is Soumyen Bandyopadhyay (unavoidably absent when I called in); deputy head is Torsten Schmiedeknecht. The school staff includes published expert authors such as Neil Jackson and Robert Kronenbourg – mobile structures a speciality – and historian Barnabas Calder, with his current specialism in brutalism. Mark Swenarton, chronicler of the late flowering of social housing in Camden, is an emeritus professor.

Schmiedeknecht meets me and we sit and chat in his office. He has a stack of original Ladybird books on his desk, part of his two-year RIBA Research Trust Award project into postwar architecture in children’s picture books. The project will culminate in an exhibition at RIBA North in Liverpool from the end of March to the end of May, and we’ll review it shortly. He’s previously published his studies into the postwar period through the medium of professional journals.

Research groups based in the school cover architectural and urban history, acoustics, sustainability, Arabian and Indian architecture, heritage and the intersection of architecture and contemporary visual arts.

Why would students and staff choose Liverpool University rather than any of the other schools in the UK, I ask? ‘It’s Liverpool – it’s a very special place,’ he says. ‘Most of our projects are set in the city, we use it as a lab. We’re culturally diverse and we’ve grown a lot over the past six years. And in the first year you get two full tutorial days a week, so it’s quite intense hand-holding.’

Schmiedeknecht reckons that on a scale from purely vocational to mostly theoretical, his school sits bang in the middle. Students are introduced to theory and ideas – indeed it offers a separate design studies course for those who prefer that to designing for themselves, and students wanting that usually transfer after their first year.  A typical first year would be 120-130 students, doubling in the second when the China cohort arrives. Each student is assigned one of the four large design studios to work in. For the MArch course, where numbers are much lower, they are also introduced to the idea of practice through group working. This was a Dunster innovation. Fourth years do half their work in groups in this way. ‘That’s an incredible preparation for practice – we have a very good employment record.’ And in the fifth year the design module gets the benefit of the visiting professors.

But back to that competition, which sprang from a broader masterplan for the whole university. Driven by senior lecturer Marco Iuliano, it is to reorganise the school as well as add a new building. Head of school Soumyen Bandyopadhyay is on the competition committee along with Iuliano and visiting professor Nicholas Ray plus faculty and estates heads. From a longlist of 18 they’re now at shortlist stage: those involved are top drawer (though none from Liverpool): Carmody Groarke, 6a, Grafton, Haworth Tompkins, O’Donnell & Tuomey and Eric Parry Architects. The judges are pretty top-drawer also: Kenneth Frampton as chair, Michael Wilford, Juhani Pallasmaa and Maria Balshaw, director of Tate. So what was left for the students to do?

Fifth-year student Alice Bufton says that the involvement of the students is both real and valuable. ‘First a group of us were chosen to present the work of all 18 to the school, who then voted. Then a month later 18 was whittled down to nine, finally it came down to a very strong list of six. Last week all six practices came to visit the school in person, together. They invited about 20 students from all the years including PhD students. We all sat down together and had a conversation, told them about the school, answered questions. A few of them stayed behind to chat to us one on one. It was great because you don’t usually get to meet these well-known architects and we could also discuss it across the years.’

It’s notable that all those shortlisted have a strong craft aesthetic. Having stayed with the school since first year, Bufton knows it better than most. ‘The school is a reflection of the city. It’s a humble place, it doesn’t have an elitist attitude, more of a family feel. It’s about making good honest architecture. The people who go to Liverpool have that kind of mindset.’