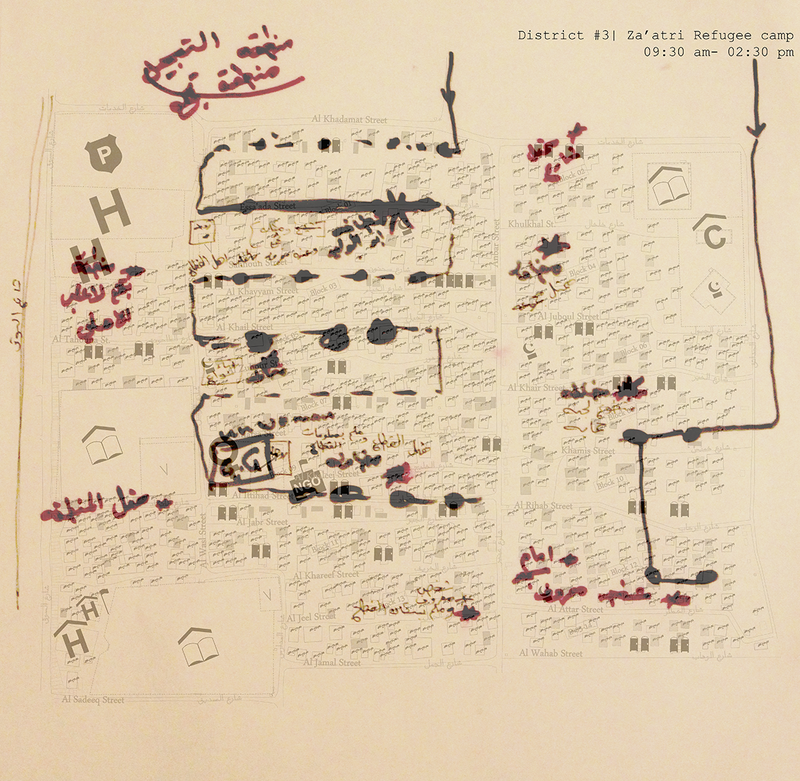 A map drawn by one community mobiliser (AJ) that shows the route that he follows through his everyday walks in district three in Za’atri refugee camp.

I started this PhD research to better understand my position as a Muslim, Arab, woman in relation to some events, borders and spaces that had long shaped my view of our shared world.

My motivations to take the architecture of refugee camps as a site of inquiry in multiple places began with my Master’s degree in Sheffield School of Architecture in 2012/2013 – through the Border Topologies studio supervised by Nishat Awan. This was my first encounter with architecture in relation to migration and borders. I was intrigued by how architectural methods were used to unpack the social, political, and relational ecologies implied in different borderscapes. The studio allowed me to translate emotions and political agencies that I had suppressed for a very long time. It was a remarkable experience – making me aware of knowledges I already had due to the context in which I grew up in Jordan.

Another source of my interest is my own experiences as half/Palestinian, half/Syrian. Despite my Jordanian citizenship that is assumed to fix me in the trinity of the nation-state-territory of the Jordanian identity, I grew up with a strange sense of liminality. Like my parents, I have always yearned for somewhere else that is out of place and time; somewhere that is not within my reach. Maybe Nablus, maybe Damascus – either, or maybe neither! The years that followed the uprisings of 2011 made these questions about home even more urgent. Za’atri refugee camp, where this research takes place, was established in 2012 in response to what is often referred to as a civil war in Syria, but what I believe had begun as a peaceful revolution. As a physical embodiment of Agambian ‘state of exception’ where refugees’ lives are kept on hold until something unknown happens, Za’atri refugee camp told the story of other states of exception. When I worked in Za’atri in 2014 as a humanitarian worker, people often shared with me stories about their revolution, their war, the destruction of their houses, and the death or disappearance of their loved ones.

The refugee camp explained other states of exceptions, but more poignantly, the refugee camp seemed to be explaining the norms that formulated our lives more generally. The collective of these experiences presented Za’atri refugee camp as a space where I could translate these emotions into research questions. It did not only materialize as a space in which I could locate my academic research inquiry, but also as a space through which I could think of as my own place in relation to the world.

This research considers the architecture of the refugee camp as a spatial practice that is continuously performed, negotiated, produced, and reproduced by Jordanian aid workers' voices

This research sets out a methodology that accounts for other modes of knowing that have been often pushed to the margins of our understanding of architectural spaces when we study those of the refugee camp. It had started with the humble will to map how the refugee camp spatializes in relation to how it is governed by the humanitarian NGO model. It finds out that mapping this relationality, however, is conditioned by the attention that we pay as architects/researchers to the precarious voices of Jordanian aid workers that mediate humanitarian governance. This research considers the architecture of the refugee camp as a spatial practice that is continuously performed, negotiated, produced, and reproduced by these voices.

Accordingly, it invites architects/researchers to pay attention to marginal narratives that lie beyond the meta narratives often displayed by more dominant representations. A careful look to how Jordanian aid workers anxiously conduct their everyday humanitarian tasks across the camp districts, socially interact with Syrian refugees and spontaneously perform what they perceive as their ethical responsibilities towards fellow-Arab Syrian refugees, informs novel and creative approaches to architecture in the camp.

Furthermore, the methodology that this research sets out also rethinks the architect/pedagogue responsibility and suggests a new model for architectural design studios. This disrupts class, gender, and racial hierarchies implied in the conventional practice of architecture; I refer to this as ‘careful pedagogies’. Using careful pedagogies not only accounts for what is beyond meta narratives, but also thinks about the ways by which we could train young architects/researchers to think of careful interventions that rather respond to people’s needs.

Witnessing the Refugee Camp: Feminist Positions, Practices, and Pedagogies by Aya Musmar of the University of Petra was shortlisted for the President’s Awards for Research.