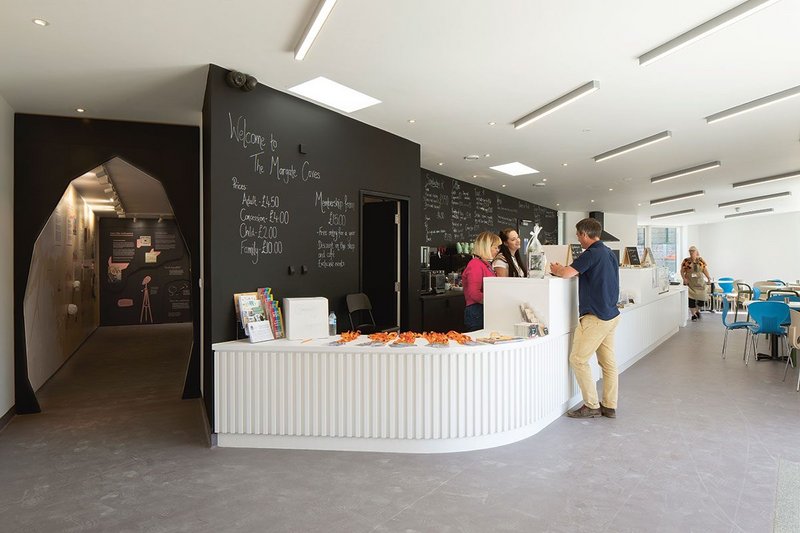 A long single counter greets visitors as they arrive. The strips of lighting recall the flint stratifications in the caves below. Credit: Richard Chivers

Community consultation rarely gets good press. Clients tend to see it as a burden and when Sarah Vickery, chair of the Margate Caves Community Education Trust (formerly Friends of the Margate Caves), came to fill out funding applications to get the former tourist attraction reopened, that’s how she saw it too; a long-winded ‘box ticking exercise’.

That was back in 2013. The caves, an 18th century chalk mine, had been a tourist attraction since 1863 but had been shut for nearly 10 years. A health and safety prohibition notice was served on them in 2004 and seven years later the council submitted a planning application to build seven houses over the top that would have effectively closed them for good.

As owner of the nearby Shell Grotto, Vickery felt losing one of the town’s main visitor attractions for a handful of houses was a bad deal for Margate and called a public meeting to stop it. Of the 100 people who attended, the group that emerged would have been happy with restoring the caves’ interior enough to reopen as piece of heritage and just replace the knackered Portakabins that had served as the reception since the 1950s. But the consultations revealed that local people also really wanted a community facility; something that could operate as a village hall for sewing clubs, church groups and the like.

‘The site is on the border of Cliftonville and Margate,’ explains Vickery. ‘Cliftonville used to have very big hotels. There was always a ballroom you could use, but they have all gone.’

The tourist attraction’s community function as well as the good work the organisation is doing locally led this year’s MacEwen judges to commend it. Margate still has its problems, despite the national attention garnered for its regeneration springing from the Turner Contemporary. The two wards neighbouring Margate Caves are in the 10% most deprived in the UK, with entrenched generational poverty and 53% child poverty. Causes include a transient population, poor housing managed by absent private landlords and health and addiction issues as well as poor educational provision over decades. The average reading age for a middle aged person is that of an eight year old. London boroughs are relocating housing-list residents there too.

‘On Northdown Road,’ says Vickery, ‘the experience was so different to the Turner,  you may as well have been on the moon. The need was there. The brothel, people trafficking…’

Consequently, the project became as much about the community as visitors. The two components financially support each other: by effectively making each part separate buildings, the scheme received both Big Lottery and Heritage Lottery capital funding – one of the few in the country that has been awarded both.

Architect Kaner Olette has been involved almost since the beginning, contorting the process and design to the changing dynamics of the project. Most of the time the team was working blind – they say the council didn’t want to engage and there was fake information that the caves were full of poisonous gas. The restorative and conservation work on the caves themselves was the critical issue. They had to be engaging and something people would pay to see. The architecture was about ensuring the interface with them was right – the entrance, interpretation aspect, tunnel, accessibility, handrails and lighting.

From the street the building is a simple slanted form with ramps up behind an existing crazy paving retaining wall to bridge the 2m level difference. The narrative is monochrome too, but the inverse of the caves. Externally the building is Italian black brick, like the flint stratifications with white specks of chalk, held together by dark mortar. The building curves at one end to make way for telegraph pole wires that could not be moved because of the tight budget. Bright blue window frames add a pop of colour that helps the building stand out. The entrance is cut deep into the elevation with a brick soffit and patterned detailing that accentuate the cave analogy. This opens into a large bright white all-in-one visitor reception, café and shop, positioned along a single long counter so one person can manage the whole process. 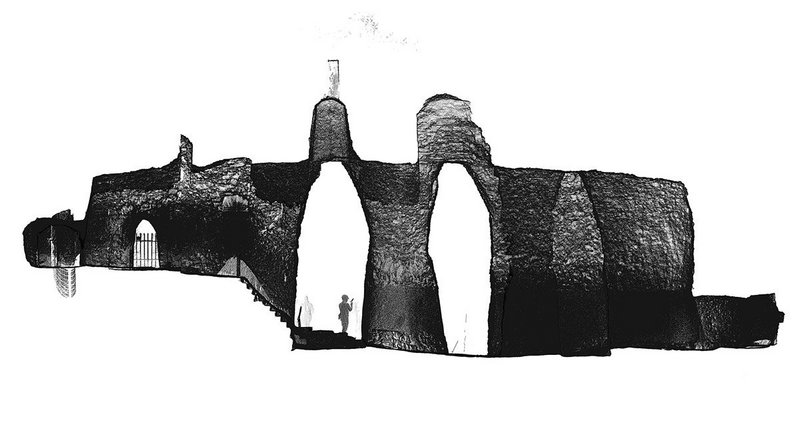 The short section through the caves. There are two ice houses within them plus a 13m well.

To the left is the ticketed interpretation room and tunnelled entrance to the rather surprising and church-like caves, to the right is the community room, which is also independently accessible via a side entrance when the museum is shut. The space can accommodate 100 people theatre-style or be divided for use by two groups simultaneously. Prices are low, like those in the café: £20 for half a day.

To date the room has been used for book launches, children’s clubs, self-help groups, and recently had its first wedding enquiry. But what makes the building a MacEwen Award commended project is how it has got the community involved. One hundred people volunteered for the archaeological dig (it’s on the edge of an Iron Age fort), 3,000 locals have visited the caves for free since it opened in August, and it will soon start running accredited tourism training courses and a community gardening programme on the scrub land above the caves. The scheme is a financially sustainable asset for the wellbeing of the community. An elderly neighbour who had initially behaved antisocially has become one of the café regulars, and when someone attempted to break in four days after the centre opened, another neighbour became de facto community watch. In an area long-accustomed to mediocrity, the project has also raised aspirations of what the built environment can be and the self worth it can provide. This was done by grassroots action, with locals, volunteers and professionals putting in more effort than they had to. As judge Hana Loftus remarks: ‘It’s nice and all from the right heart.’