From a vintage marine-inspired pamper zone, via a minimalist haven of yin-yang tranquillity, to a domed jewel box lined with gold, the latest luxury hotel bathrooms are a showcase of design dexterity

At Ron Arad and Ben Adams Architects’ Nobu Hotel in Shoreditch, a key concept for the 148 guest rooms and suites was to create tranquil spaces through simplicity. The bathrooms are all accessed via a minimal ‘ebonised’ dark corridor, the doors picked out by a simple custom brass push and pull plate.

The white bathroom interior is the yin-yang counterpart to the corridor, augmented with accents of sparkling brass and gold, including a specially-commissioned ceramic basin with a golden glaze, by Laufen Living. The basin is backed by a rotating vanity mirror incorporating an illuminated magnifying mirror, and an internal window.

Carolynne Shenton, partner at Studio Mica, told RIBAJ: ‘The vanity counter, a vertical opening that brings borrowed light into the shower room, and an illuminated wall niche that extends to the ceiling, were meticulously detailed to create continuous joint lines between tiles around the room.’

Floor tiles were laid as a ‘structured’ random design to mimic the board marked concrete of the building’s facade. The design addresses the common problem in hotels of accidental flooding that can damage bedroom carpets and ceilings below. The shower entrance is narrow, relative to the position of the shower fittings, which made it possible to minimise ‘splash out’ and create a simple, clear opening with no glass door or curtain.

The faded glamour of a 1930s transatlantic ocean liner was the starting point for all interior design at this five star hotel set inside the grade I-listed former Midland Bank building designed by Sir Edwin ‘Ned’ Lutyens.

The 252 bedrooms feature a mix of small, medium and large bathrooms. The small bathrooms are ‘tidy and efficient’ layouts inspired by modern technology in the Edwardian era. The designers worked with a Spanish factory to develop the custom creamy white crackled effect wall tiles that have a sepia tone rubbed in for variation.

Alice Lund told RIBAJ: ‘The floors are black and white marble mosaic in a classic ‘target’ pattern, the light fittings were custom made in Blackpool based a Victorian fixture found at an antiques fair in the north of England. Wall-hung basins are by British supplier Thomas Crapper.’

Medium sized bathrooms are more ‘gracious and urban’, they include a larger variation of the crackled cream tiles, with accent tiles in bold petrol, mulberry, and mustard. The floors are Carrara & Nero Marquina marble in a diamond pattern.

Panoramic views of the Avon Gorge and Clifton Suspension Bridge provide the backdrop for the respectful yet irreverent revamp of Bristol’s most iconic Victorian building, which was originally opened as the Grand Clifton Spa and Hydropathic Institution in 1898.

‘We wanted to pay homage to the history without it becoming like a museum. The hotel has beautiful cornices, original skirting boards and other details that we wanted to highlight, but we’ve introduced a contemporary slant to the bathrooms to keep things fresh,’ says Anya Gordon-Clark, designer at Dexter Moren.

Up-spec bathrooms feature diamond patterns of ceramic tiles, a modern interpretation of patterns seen in Victorian homes, while standard bathrooms have porcelain tiles with a printed concrete effect. Most of the sanitaryware is from Hansgrohe, vanity units are made from Italian Carrera marble. Teal-painted walls provide a bright pop of colour in contrast darker blues and reds in the bedrooms.

The Hotel du Vin brand is associated with roll top bathtubs. Here Astonian Rimini cast iron baths with claw feet, from UK-based supplier Aston Matthews, were installed beside the bedroom windows to allow guests to enjoy scenic bay views while having a soak.

‘Our original render of two roll top baths in the mock up bedroom suite overlooking the suspension bridge was what initially sold the concept to the client and what probably won us the job,’ Gordon-Clark concludes.

This five star hotel lives inside the newly refurbished Ten Trinity Square, a grade II* listed neo-classical edifice and former HQ of the Port of London Authority.
The hotel’s deluxe and superior suites are housed within the frame of the existing building, their design influenced by the period windows, cornices and other features.

The bathroom walls and floors are Volokas White  marble with a central mosaic pattern was formed from Nero Marqin, Marron Emerador and Carrera C marbles.
Junior suites sit between the existing building and a new internal rotunda. A lack of natural light led to the concept of bathrooms like jewel boxes, with accent lighting and delicate spatial tricks.

Jack Bird, associate at Aukett Swanke, told RIBAJ: ‘The baths are the centrepiece of the bathrooms and stand below a dome with a faded gold mosaic, with recessed accent lighting, by Italian firm Bisazza. The gold tiles are more dense at the base of the dome and fade out as they reach the top.’
Bird says that the historic building fabric and listed status made rooms extremely difficult to co-ordinate and every spare millimetre counted. Fan coil units and aircon had to be located inside the bathrooms and configured to feed into another floor with access via a single panel. 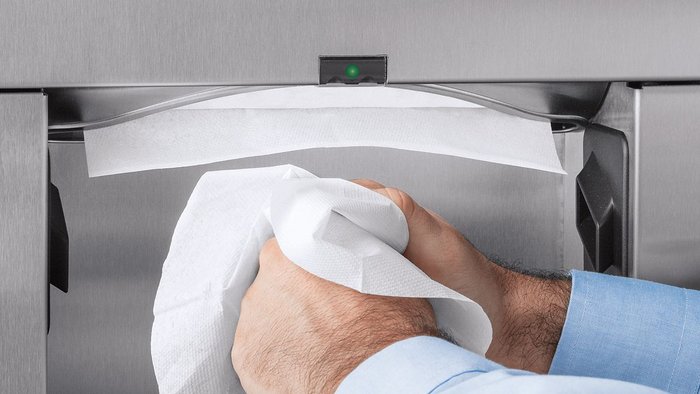 In association with Bobrick

Hand dryer offers the best of both worlds 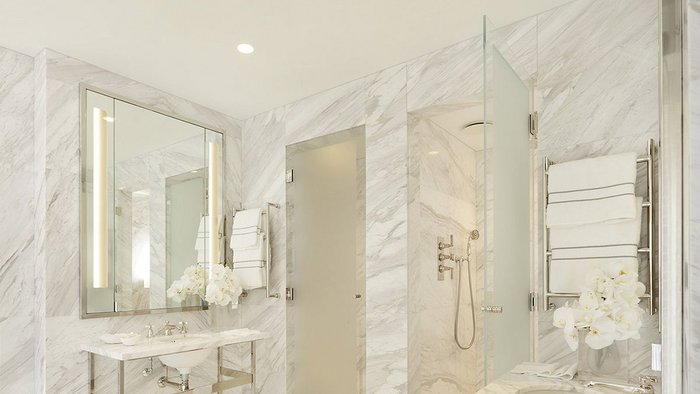 In association with Samuel Heath 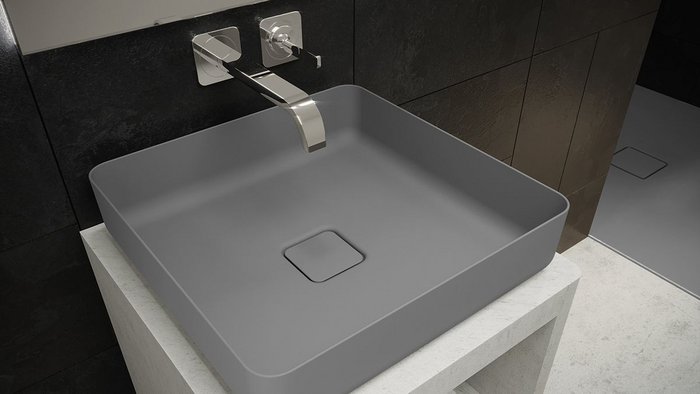 In association with Kaldewei

A fine piece of bathroom minimalism