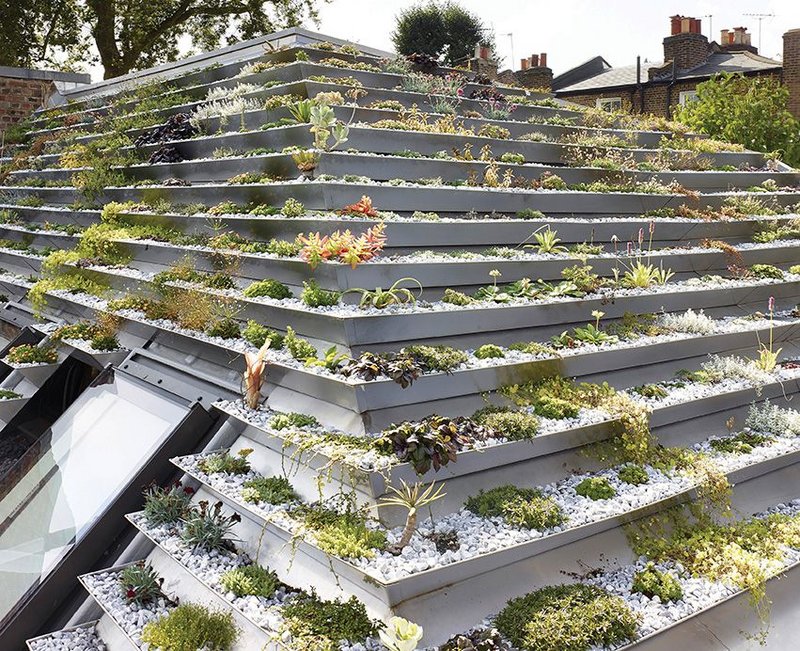 Nestled away in a landlocked corner of Hackney’s De Beauvoir Town, a small home and studio is making as much of its rooftop as Spiderman might. And in this case, there is a specific connection. The couple living here are costume designer/makers, whose specialisation in working with leather over the years has seen them employed by the film industry to create costumes worn by the likes of Batman and Wonder Woman.

The small infill site was originally a late Victorian foundry, later converted to a photographer’s workshop, and most recently turned into a studio for the pair. They decided to avail themselves of the sui generis live/work status and asked architect Hayhurst and Co to find a way of maximising the volume of the tiny site, allowing them to create a home for themselves there.

Project architect Jonathan Nicholls explains that with every wall being a party wall and rights to light a real concern for all the neighbours, any second level of accommodation on top of the single storey was going to have to be squeezed in under a roof form that would not only take account of these issues but pre-empt the planners’ desire for a sustainable proposition.

The result is this strange asymmetrical stepped form. Two of the party walls are straight, while the two other sun-facing sides are at 30° and 45° angles. With the aim of creating a heavy duty green roof that the owners could clamber up when necessary, the firm opted for robust steel ‘hoppers’ that step down from the apex of the roof to the access point on the first floor balcony.

Nicholls explains that, when it comes to green roofs, the steep angles they were working with made the options quite limited, and, in any case, the couple were averse to the idea of a mere blanket of sedum, preferring something they could garden.

With access an issue, the architect moved away from the idea of plastic interlocking tray systems for a bespoke design of lapped 150mm deep steel trays that could take the load of soil, plants and chippings. The metal picks up on the mirrored stainless steel window reveals, which are designed to maximise daylight ingress for the almost completely roof-lit living area at ground level.

Each steel tray, fixed back to timber roof batons, creates a V-shaped trough, spaced with drainage holes to allow excess water to drain down into the next tray and away at first floor level. The optimum size of holes was worked out by the firm building a full-size model of the detail at its office and testing the irrigation qualities over a period of months.

Engineering loadings were a key consideration. The timber glulam structure had to take the weight of an extensive green roof and steel structure, making the whole building, like Marvel Comics’ Antman, a small but extremely robust thing. 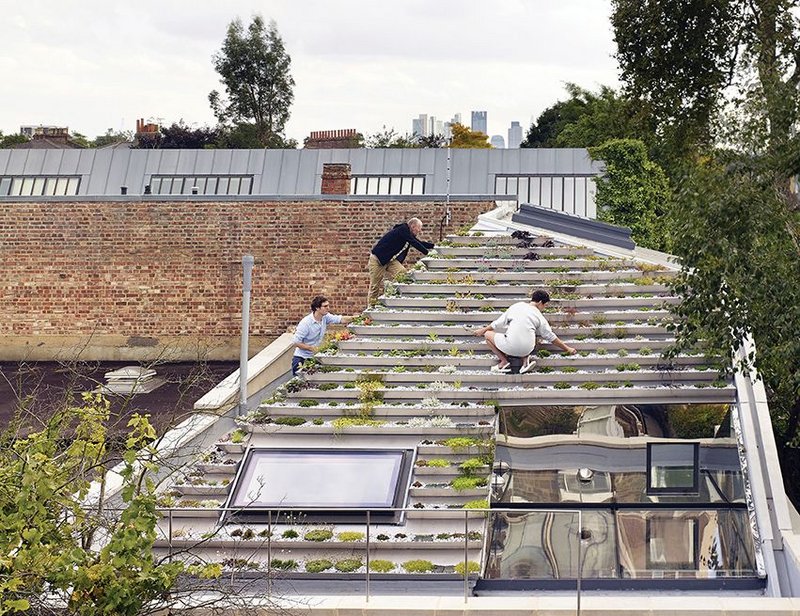 The build-up of the extensive hybrid roof is, like the rest of the house, timber. Glulam posts and beams form the main structure of the new building and are key in helping to carry the significant loads of the roof. The 1.6mm thick folded steel plates that make up the lapped planting trays are fixed with stainless steel screws through a GRP fibreglass roofing membrane onto vertically laid 25x50mm softwood batons at 500mm centres. The batons are fixed to 12mm Sterling OSB board which sits atop 150mm Celotex solid insulation, with all joints taped to act as a continuous vapour control layer. The underside of the insulation is 12mm WBP sheathing.  Much consideration was given to ensuring that, on an exposed sun-facing roof, the steel troughs expanded and contracted as little as possible. To achieve this the architect chose a geotextile fleece to line the bottom face. This not only insulates the metal but allows water to run off the roof without the build-up of a dead load. It works with the ‘reflective’ white granite chips on the soil surface to help minimise expansion and contraction of the troughs.