Tintagel Castle Footbridge carries visitors off the mainland and into the past in a single, much easier, step. Creating it was anything but 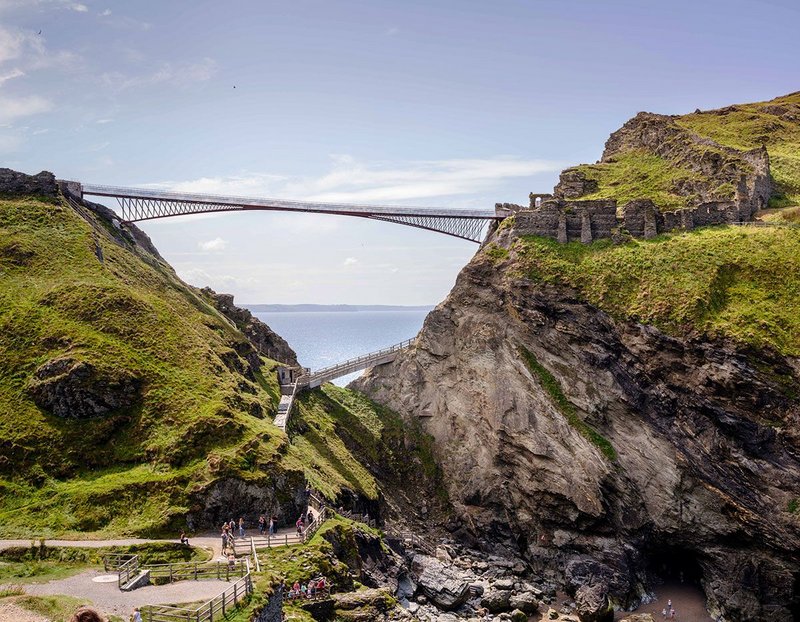 The new bridge in its dramatic setting. Credit: Jim Holden

High above the sea, on the edge of a Cornish cliff, is Tintagel Castle Footbridge, recreating a Medieval land bridge lost to erosion. But it is not one bridge, it is two. It is designed by the man who brought London’s Shard to reality, William Matthews, and Belgian architect-engineer Laurent Ney.

The site is the legendary base of King Arthur and under the rough turf, where wild flowers battle with the salty air, lie centuries of archaeology showing that this was once an international trading post, tin being shipped out as amphoras of wine were shipped in. That, and the remains of the 13th century castle, ensure the site is protected in many ways as an SSSI and scheduled monument. It is also a visitor attraction for English Heritage and the access for the many visitors was up and down steep and congested steps between the mainland and ‘island’.

The competition to design a bridge to link them instead needed a certain magic, thought Matthews. And the design needed to be buildable in this precious and difficult terrain. The team came up with an unusual solution to cross the gorge; two 30m cantilevered bridges.

From the first site visit, incredible views and the complexity of getting material up narrow lanes and steep paths had made the team interrogate the structural method. The first big move was to put the structure under the bridge walkway for clear views. If that was an arch it would have required a huge amount of temporary structure to hold the bridge in place while being built – a particular worry when a sea storm hits. Cantilevers however are stable, even in an unfinished state. 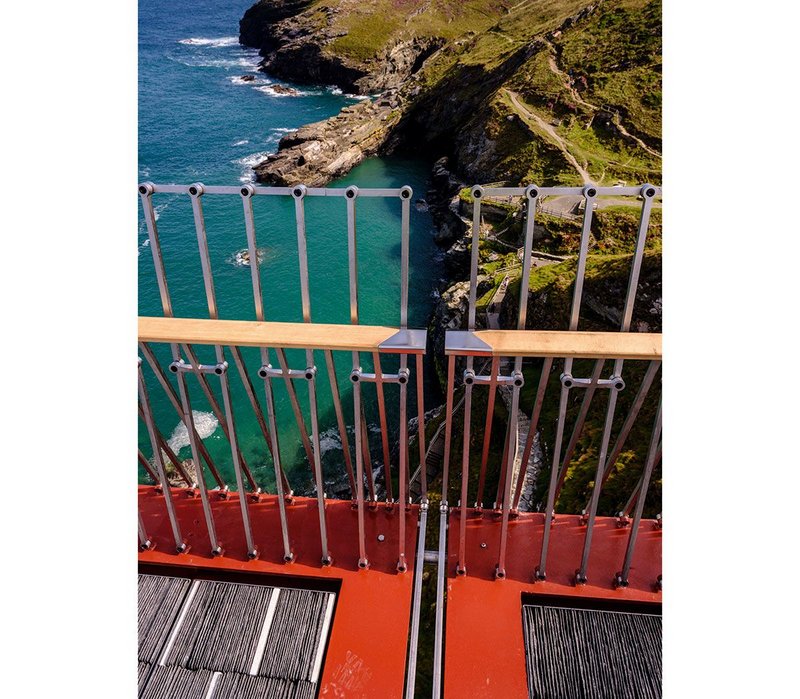 The separation of the two sections of the bridge is marked by a 40mm gap connected by no more than two pins. Credit: Jim Holden

So nine rock anchors of 16m of cable were sunk deep into the rock and grouted into place, in tension for the upper chord and in compression for the lower. There is substantial potential for different levels of deflection if a group of visitors was on just one of the bridges – enough to create a step between the two. Matthews thought it might be fun to play around this as a symbolic moment of stepping from mainland to island, from present to past, and leave a gap between the two bridges.

In the first draft of visualisations for the design competition the gap was invisible – Matthews had to point it out to the visualisers. The submitted visuals make it clearer. The gap is just 40mm with two 40mm diameter pins to make sure the bridges are aligned – but like the equator, it is a symbolic moment. The edge-on slate surface breaks here and visitors can fully appreciate the view, and the vertigo, for one fearful moment 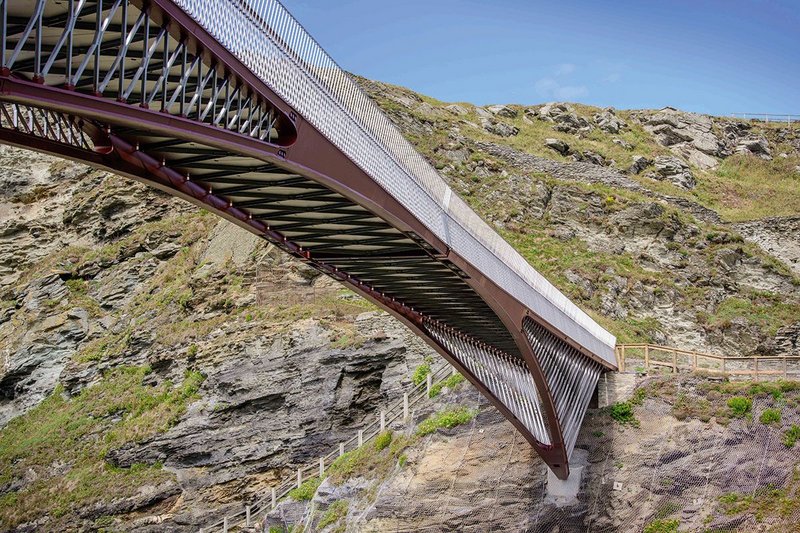 Each of the bridge’s two sections spans 30m, springing off concrete footings on the cliffside. Credit: Jim Holden

A cable crane was used to construct the bridge, more normally employed to build ski lifts. Pylons at either end of the site, with cables along them, follow the line of the bridge and extend all the way down the lane to the gift shop. Materials were brought up all the way from the shop on the cable. These were not just any materials – the steel bridge structure arrived in five tonne sections, six for each bridge. The plan was to install a section a day but sometimes it was two or even three, though on rainy days there were none at all. The structure was installed on site in just two weeks – bolted together by steel riggers including a female trapeze artist.

Could this bridge have been built with less carbon expenditure than in its 65 tonnes of steel? It seems unlikely. Timber was disregarded due issues with span and longevity. And that is put into perspective by the 300 tonnes of hardcore helicoptered in for the island’s paths. The extreme spec solution for sustainability would have been not to build, but to discourage the 250,000 annual car-dependent visitors and not to develop the site.