Assault Course. Selfie Booth. Slush Puppy machine. Popcorn dispenser. Phone chargers. Adult soft play. Trees. Dance floor. Beanbags. Hamster Wheel (size not specified). These were just some of the things on the wish list of Tadley’s Youth Council when they were called in for a brainstorming session on what should be in their new youth club. There were dozens more. And while the snack dispensers and the hamster wheel don’t seem to have made it through, plenty else has. The Point in Tadley is a proper place for people to go, a community facility. And it is the winner of this year’s MacEwen Award.

It’s not often that a town’s residents vote through their parish council to raise its council tax specifically to cover a funding gap for such a building, but that’s what happened here. In the end they didn’t have to resort to that, but their readiness to do it shows the goodwill behind the project. And since the building, with its café, halls, meeting room and sound studio, is open to all locally, it’s not just kids running around and playing pool. A group of home educators meets there, as does a local choir, the inevitable yoga and pilates classes and so on. And as it’s sited right behind a community centre from the 1980s, the two buildings can work together.

It’s not easy getting a youth building right – with the right facilities, in the right materials – without appearing condescending or big-brotherish. This is one of the things that commended The Point to this year’s Mac­Ewen judges. And on the day I went to see the place with architects David Ayre and Dominic Gaunt, along with their client, youth leader Adrian Noad, my immediate response was – this doesn’t feel like a youth club at all. It’s more like a Grand Designs-style house.

Not that it’s on a particularly auspicious site, this being a landlocked scrap of land behind that older, distinctly tired-looking, community centre, hemmed in by the back gardens of houses, with more homes planned alongside. But the land had the virtue of coming free – donated by Hants County Council as its contribution to this £860,000 project. Other money came from Tadley Town Council, the Turbury Allotment Charity, the Greenham Common Trust, Basingstoke and Deane Borough Council, the Local Infrastructure Fund, and a Public Works Loan. All of which only goes to prove how resourceful you have to be to patch together the funding for such a project. Many local companies donated materials and resources.

The whole thing was kept as home-grown as possible, with the timber-framed prefabricated panels for the structure, including some complex angled joints to the glulam beams, being made in nearby Andover, and trusted local contractors used. The level of ambition was high. As Noad says, you could have got the minimum facilities needed in a basic single-storey hut tacked onto the existing building – since the youth club was operating out of there anyway. Instead, he said the decision was: ‘Let’s build something that’s got some legacy to it, that we can grow into.’

Upon which, Ayre and Caroline Ferris of ACG came in to meet an exuberant panel of their youthful clients (mostly in the 12-14 age group) for that briefing session. ‘It was one of the most frightening experiences of my life,’ says Ayre with feeling, meaning that it was a noisy, full-on event. The wish list that resulted was refined into a workable proposition. ‘Quite a few things made it into the building,’ says Gaunt, ‘particularly the desire for it to be something like a tree house.’ A lookout post, if you like, which made it a two-storey building. That, along with the need not to be too bulky an object in the sight of its neighbours, started to determine the folded-plate geometry of the building.

You may not know Tadley – I didn’t. It is a town on the very northern edge of Hampshire, next to the county border with Berkshire. More significantly, it has long been intimately associated with the nearby Atomic Weapons Establishment at Aldermaston, a big employer from the 1950s onwards. Housing for the AWE workers was mostly built at Tadley – so families settled there and their children grew up there. While the AWE had all kinds of communal facilities for its workers, the town itself lacked them – along with basic things like good shops, for quite a while – even when the town’s growth had more to do with dormitory housing associated with commuting to the nearby bigger centres of Basingstoke and Reading. A public library arrived only in 1994. A well-equipped centre for young people was seen as key to the further development of the town, which explains the way the council got behind it.

The building evolved as an outward-looking, large-windowed object, very different from the scout-hut aesthetic of so many such centres. It is pretty big at 410m². Inside are two multi-purpose halls, music room and recording studio, a café, and a series of activity pods and break-out spaces including the best break-out space of all – the hard-landscaped area around it, much used in summer when the doors open up to the outside realm.

‘Part of the brief,’ says Noad, ‘It was that it had to be quirky.’ And indeed it’s a dramatic-looking thing, clad in dark grey fibre cement panels out of which the openings are carved, with deep splayed reveals to the glazing expressed in timber veneered rainscreen cladding. The ideas were developed through a series of consultation events and workshops, using models and sketches.

And it is used, with typically 80 or 90 people flooding in on one of the key evenings, Thursdays. Noad notes that it is the younger ones who have most adopted it, with older teens at first less keen. Pretty normal, he says – a generation has to grow up in and ‘own’ such places over a few years.

As for Ayre Chamberlain Gaunt, this youngish 20-strong Basingstoke-based practice is in expansion mode, the backbone of its work being housing projects of the £15m to £20m scale. It is building in London as well as the home counties, and – with recruitment a bit of an issue, even with fast rail links – is pondering opening a London office in 2017. Educational and arts projects – including the refurbishment of the grade II* listed Marlborough College – also come into the mix.

By the standards of many of its present projects, The Point is relatively small. But the practice poured a lot of time and energy into it, and – as the MacEwen judges noticed – it shows. 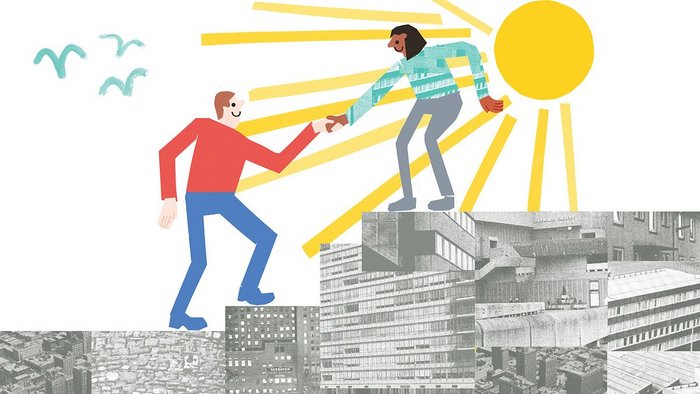