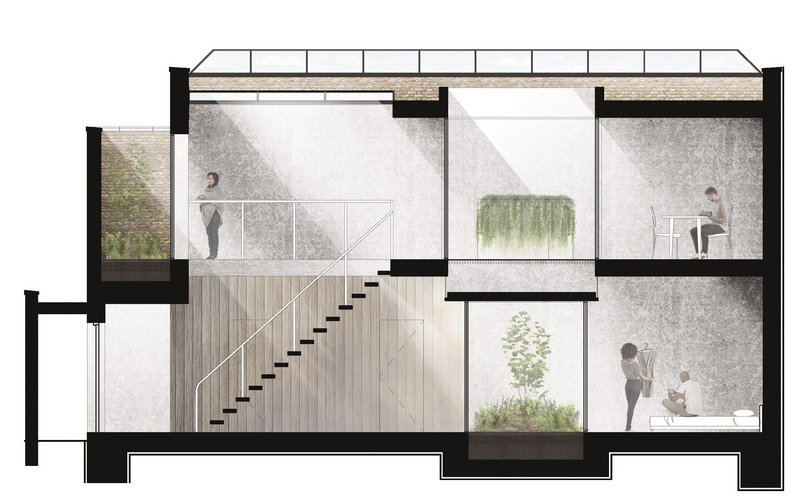 West-east section. The elongated roof lantern stretching from front to rear is intended to define promenades through the building’s key spaces.

'The competition brief points to the scarcity of straightforward sites in densifying cities,’ noted Matthew Bate and Julian Hurley’s project statement. ‘We suggest that history has met this challenge before in the form of the terrace house and, following this, the back-to-back house of the industrial revolution.’

The proposition takes a landlocked and overlooked site ‘which does not lend itself to traditional building typologies’ and turns it into an opportunity to generate affordable housing provision.

Bate and Hurley update the problematic 1800s back-to-back format. They address issues of poor lighting and ventilation through the use of a long, triangular roof lantern and another large rooflight, positioned above interconnecting multi-level spaces inspired by the Loosian ‘raumplan’, which challenged the hierarchy of rooms in stacked floors.

The central lightwell can be both inhabited or empty

Bate and Hurley's design sinks a glazed cube into the floorplate, positioning a triangular lightwell at ground-floor level askance to the cuboid above it. The central lightwell can be both inhabited or empty. The device permits views at unexpected angles, encourages fluid movement around it and produces a pleasing cascading, pooling effect with light. ‘It is surprising how the triangular lightwell brings light into the room,’ observed Tatiana von Preussen.

The ‘simple and calm’ interior is a counterpoint to the austere facade, devoid of details. The judges also praised the ‘well-worked-out plan’, its provision of privacy within a dense plot, and its attempt to offer a response to volume housing in constrained conditions.