When lockdown landed, five architectural students and assistants bounced back and used potentially wasted time to develop their skills and careers in unexpected ways

Since the lockdown was announced in mid March, life’s staple experiences have fallen away for many of us. For architecture students and assistants, the physical design studio has evaporated into the virtual, graduations and end of year shows have ceased, junior staff have been furloughed, travel plans have been cancelled and independent life has retreated with twenty somethings returning home to live with parents. So how have young people responded to such a full suite of scuppered plans? Three sets of students and designers describe how in the face of so many restrictions, they have sought recourse to alternative ways of working, developing their own plan B: Anureena D’costa and Elle Thompson explain how a competition helped them through lockdown and furloughing; UWE’s Mart Musekura describes how he substituted cancelled travel plans with internship and research; and Lisa Lucy Gakunga and Andre-Donovan N Reid of Kiondo relate how as architectural outliers they have made community and entrepreneurship the focus of their careers.

When the journal put out an open call in early June to students and assistants, Elle Thompson responded with a heartfelt written account of her cohort’s experience of Covid-19: ‘First to furlough or kept at all cost?’ Despite her own positive placement in practice at Evans Vettori in Matlock, Derbyshire, she was acutely aware of the fate of her peers: ‘Fellow recent graduates working at various sizes of practice have seen sudden redundancies, others are furloughed, and some are busier than ever, taking on the workload of their departed colleagues.’ She describes vividly the angst that this volatile situation has induced: ‘the Part I feeling the need to prove their purpose, dedication and worth above and beyond the usual service’.

By the time the interview was set up in July with Elle and Anureena, her collaborator from Nottingham, their star had, ascended. Their entry for the RIBAJ’s Rethink 2025 design competition, ‘Post-Pandemic Exchange’, was first longlisted, then shortlisted and finally commended. They have been ‘blown away’ by the exposure of their project, which depicts a colourful and fun vision of a green revitalised city centre and suburbia. This they explain, was informed by Alison Davies’ sustainable communities unit at the University of Nottingham, in which they studied Milton Keynes and Parkhill and were encouraged to ‘think big with new interventions like the young architects of the postwar period’. Davies describes Elle and Anu participating ‘enthusiastically and intelligently’ in the unit and adds that their imaginative use of visualisation collage techniques was inspired by artists Fionnuala Boyd and Leslie Evans. 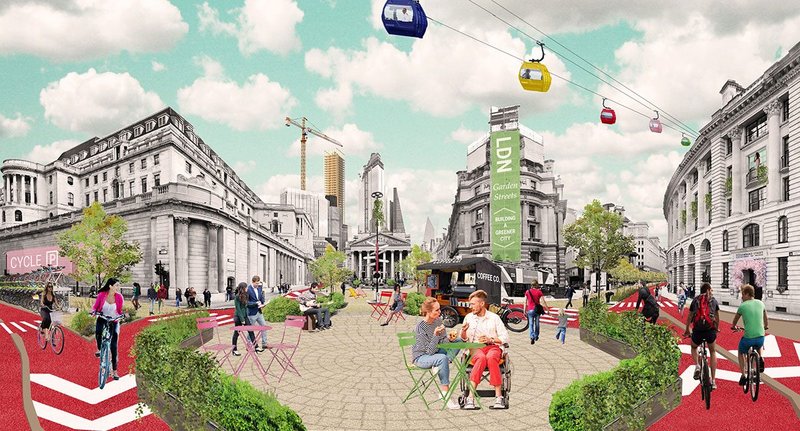 Anu, who was furloughed from her placement at Rayner Davies Architects in Chatham Maritime, first full- and now part-time, relates how she recovered her mojo as soon as she and Elle started developing the competition entry. This has been a year of curtailed opportunities for Anu. Her greatest low came when she thought that her reduced time in practice, caused by furlough, would affect her application to Part II courses. Fortunately, the situation was widely recognised by schools of architecture and she has a place in September at the University of Sheffield, though her planned trip to India at Easter was cancelled. Her passion for playing American football has also been stymied. Anu, who discovered flag football as a fresher at Nottingham, advanced to the GB squad in her second year. Living at home in Kent while on placement, she was all lined up to join the Maidstone Pumas and experience for the first time the full-contact game in a mixed team. 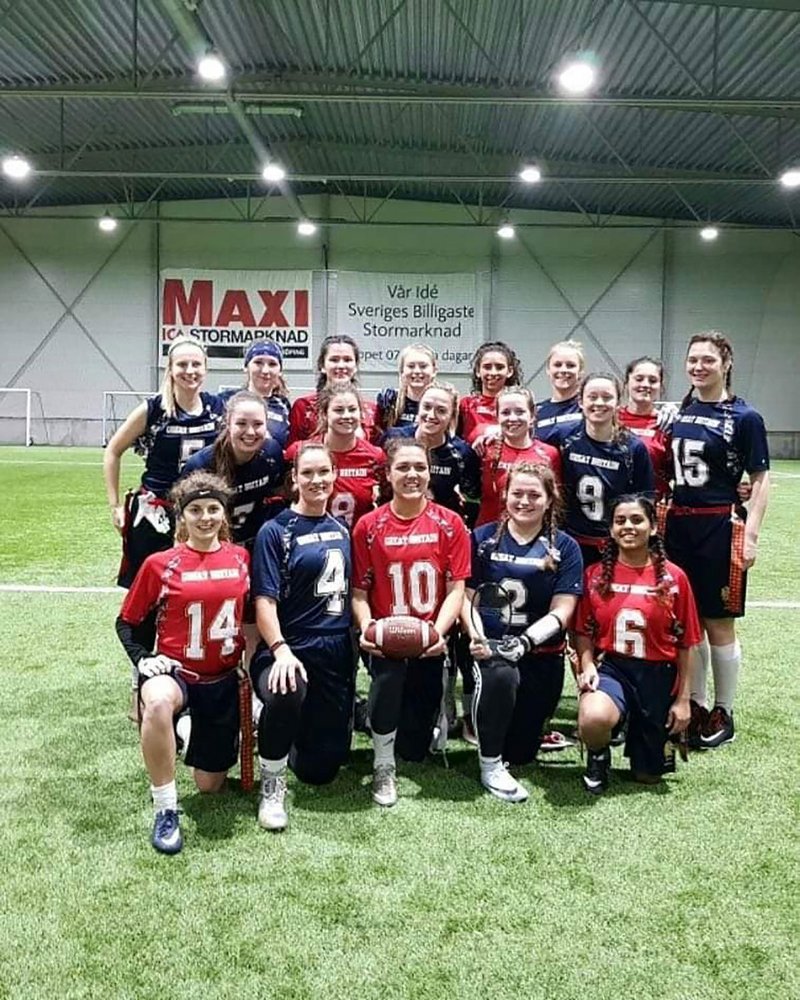 Anureena D’costa in the GB flag football squad at a tournament in Sweden. Credit: Sara Carnduff

As Anu’s and Elle’s plans to travel and see the world on their year out closed down, they found themselves with more time to read and reflect. Anu has been inspired by Michelle Obama’s autobiography Becoming and relates strongly to Reni Eddo-Lodge’s Why I’m No Longer Talking to White People about Race. They are both currently reading The Death and Life of American Cities by Jane Jacobs. Elle, who returned to her mother’s home in a suburb in East Yorkshire during lockdown raided Evans Vettori’s bookshelves before she left. John Taylor’s 1973 book The Village in the City was influential in shifting her perceptions of her surroundings. Some of the delight she discovered in the possibilities of the commuter belt was injected straight back into the pair’s acclaimed competition entry with its portrayal of an enchanted suburbia.

Mart Musekura, studying for Part 1 at the University of the West of England (UWE), Bristol 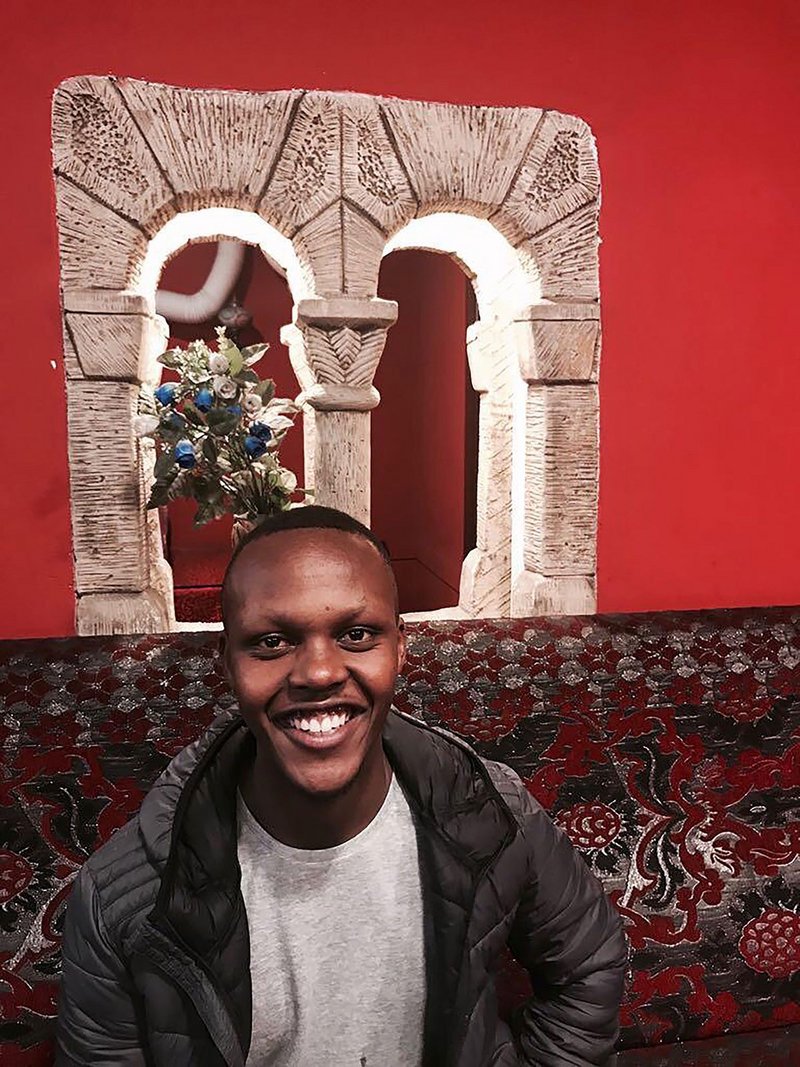 Mart Musekura, third-year student, studying Architecture and Planning at the University of the West of England, Bristol.

Mart Musekura, just about to embark on his fourth, final year at UWE, where he is studying towards a degree in architecture and planning, had a jam-packed summer ahead of him. It was to kick off in May with a prized British Council Fellowship at the Venice Biennale, followed in mid June by an internship in London, before resuming his travels in August. The holiday period was to be rounded off by a further work placement at Tabanlıoğlu Architects in Istanbul, completing in October.

The only part of his crowded schedule that was not quashed by the pandemic is his paid internship at Fatkin in West London. This was by necessity delayed, but the placement at the emerging architectural practice has opened his eyes to the potential relevance of small projects, enabling incremental change. At Fatkin, he has been developing innovative design concepts, such as that for a household waste recycling centre.

As plans started to fall apart in the spring, Mart turned his attention to the research and design initiative, BeyondStudioBorders, that he had set up with Giorgiana Mariana Bălăucă in December 2019, working with students and friends from UWE all studying architectural programmes with different specialisms, to undertake design competition entries. Their investment in a subscription to collaboration tool Slack paid off as remote working became a necessity during the lockdown.

While completing his third year, Mart juggled his studio portfolio with two further architectural projects, including an entry for SKYHIVE 2020, portraying an urban health forum based in Mexico, entitled Foro de Salud Urbana, Tijuana. It was designed with particular focus on the UN Sustainable Development Goals – notably Goal 3 to ensure healthy lives and wellbeing at all ages. At the end of the year, he emerged with a first-class mark for his university dissertation that explored an urban strategy for a post-conflict reconstruction of the city of Homs in Syria. Mike Devereux, the programme leader for architecture and planning at UWE, praises Mart’s ability to remain motivated and his engagement remotely ‘in intelligent and thought-provoking studio work’. In his own words, Mart describes his enthusiasm for design projects that are politically and socially responsive, providing the opportunity ‘to speculate and respond to the current changing world’. 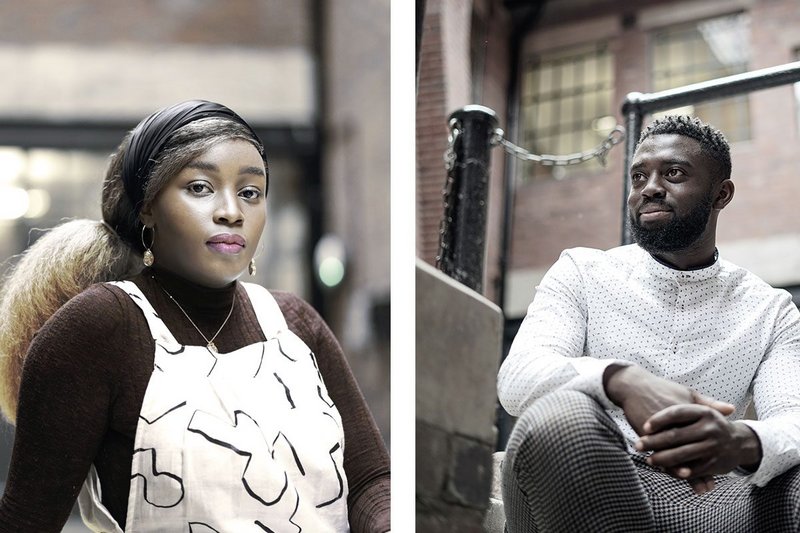 For Lisa and Andre, the Plan B has always been the Plan A, as they have carved out their own alternative path. Both studied Part I on the MArch architecture programme at Birmingham City University (BCU), where Lisa has recently completed her Part II. Alessandro Columbano, senior lecturer and Lisa’s Part II course director, describes their strong sense of vocation, eschewing conventional practice: ‘Andre and Lisa have shown that they always knew their education was to help create positive change in society, and not just for their career prospects. They had a level of curiosity and unorthodoxy in the work that meant they were considering architecture as a social mechanism to exchange and discuss ideas rather than just the design of a building. In a way, this, combined with the ability of getting others to join their collective vision, enables them to demonstrate an entrepreneurial spirit to go with their design ambitions.’ 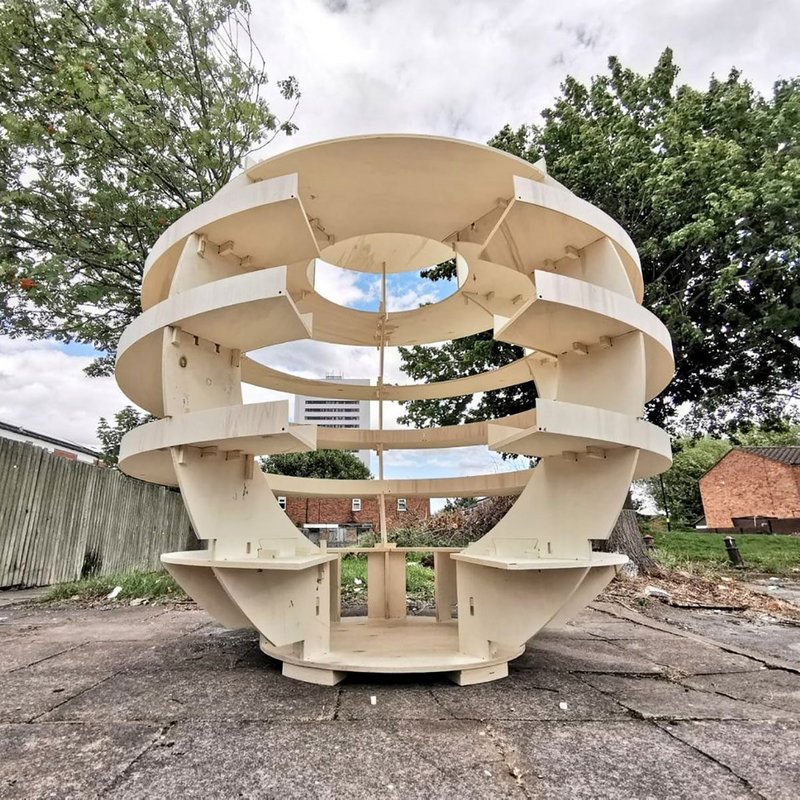 Having met at BCU eight years ago, after a trip to Kenya, Lisa and Andre started brainstorming ideas. Andre worked for a few months as an architectural assistant at Design Space 2 in Birmingham, but it was soon apparent that they wanted more from practice. They yearned ‘to work closely with people’s needs and wants’ and ‘open up a space for design and craft-making, offering equipment and expertise’, which would allow ‘an exploration of dreams and desires’. In 2014, they pursued funding for Blacktapestudios in Aston, a workspace offering laser-cutting and CAD/CAM facilities to other creatives and students. In 2016, they set up PopIN, a six-month initiative led by Lisa, curating a pop-up store in central Birmingham, which showcased jewellery, artwork and clothing by 15 local designers. The engagement they had with landlords, as they sought to secure rental opportunities, provided vital insights into property negotiation.

Having started a course in civil engineering, Andre founded Kiondo as a means ‘to get back to design, creating bespoke joinery, working with underserved people’. While Lisa had their son and returned to BCU to undertake her Part II, Andre began to increase his work in consulting on community projects or undertaking collaborations with communities. He uses the analogy of ‘a gardener providing the right conditions to flourish’.

They made a financially motivated move to Walsall, but soon realised the potential of the West Midlands’ town and the opportunity for change. The demographic is 70% working class and predominantly white with sizeable Asian and Polish populations. As ‘black people of colour’, they are very aware of being ‘outsiders’ and ‘the tensions around who belongs’. This also makes them well placed to trigger conversations around identity. With the anger over George Floyd’s death and Black Lives Matter trickling into the UK, ‘the need to revisit history and shift the perspective’ has gained momentum. They want to create spaces ‘where narratives can be validated’. For them, ‘it is important that Covid-19 emboldens, leading to radical thinking and change’. Their ambition is to create a community hub for the town, which will provide creative studios and a place for communities ‘to convene and explore’. They have secured over 5,000 square feet with an option to buy and rent free for six months in the Old Hogs Head pub in the grade II listed Brookes Works, built originally as shops and saddle works. Their focus now is on fund-raising with local partners and communicating with the people of Walsall to restore and regenerate this handsome 19th-century space. 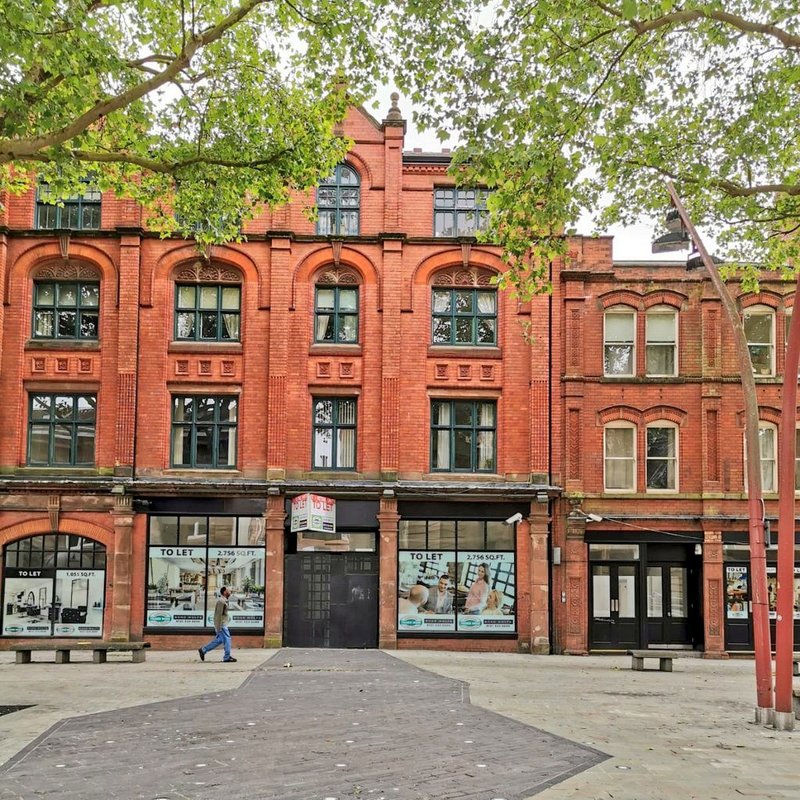 When obstacles appeared on their established routes in education and practice, Elle, Anu and Mart took the initiative and sought new outlets for their work. It is a level of risk taking that Columbano from BCU recognises that Andre and Lisa have actively embraced in their careers - and that we should be encouraging other young architects and designers to be seeking with ‘confidence and integrity’.