What: Rooflights
Where: The Rooflight Company, Oxfordshire

The saying ‘Those who do not learn from the past are doomed to repeat it’ usually carries a negative connotation, but for architect Peter King, founder of The Rooflight Company, it was far from doom-laden. Setting up his architectural office in rural Oxfordshire, most of his projects were refurbishments and extensions of existing properties, but in a planning context that demanded like-for-like solutions, King found he constantly experienced problems sourcing new rooflights that looked like the cast iron ones that were being removed.

So in a moment of inspiration, he decided to design one for himself. As it turns out, this did not prove too difficult. King took the original Victorian cast iron design and modified it to allow for a powder-coated steel casement and a double glazed unit. The design was so faithful to the original that the only thing the architect ended up patenting was the casement’s thermal break. Fabricating the first models in a converted pigsty on a local farm, the result was the ‘Conservation Rooflight’ – a high thermal performance, hinged, double glazed steel unit that, like its ancestor, sat discreetly flush with the roofline. In a savvy marketing move, King sent out drawings of the design to conservation architects and planners all over the country; over time giving his Conservation Rooflight a monopoly in the UK’s heritage refurbishment market. The Rooflight Company was born.

Celebrating its 20 anniversary this year, and despite working in a competitive industry, The Rooflight Company is still going strong. While King still heads up his own architectural practice, the manufacturer now employs 60 people and has a turnover of £5-10m, operating from a less pigsty-like but no less rural Shipton-under-Wychwood HQ. To survive, The Rooflight Company has had to diversify. It remains in its core sector but has expanded its range to produce the Neo, a crisper, machined version of the Conservation rooflight; the ‘Solar’, whose module allows it to integrate easily into solar arrays; and the Fortecom, a new high performance unit formed of high strength and performance composite resin.

The company has, as a result, seen its products specified in less conventional situations, like the walls of Zaha Hadid’s Maggie’s centre, on Will Alsop’s ‘The Public’ in West Bromwich and on the flat roof refurbishment of London’s Royal College of Surgeons. Company chair Valerie King puts this down to the fact that every project is treated as bespoke, and designed as such.

‘Our steel windows are more design-flexible, and profiled aluminium systems can’t do curves like we do, and certainly not achieving the same thermal properties,’ she says. ‘It’s also easy for them to do fixed lights, but as buildings become more reliant on opening lights for natural ventilation, it’s a more complex problem.’ So it is in this niche that the firm is finding its firmest footing.

Preparing for a more sustainable future, the business is also looking to higher performance materials to develop its range – the latest being its Fortecom rooflight, which has a frame with a far higher thermal performance. ‘We’ve been looking at glass fibre/resin protrusions and helicopter blade materials to push our latest range,’ says King. ‘The unit is a cold bonded frame that has no welds, and with only eight bonds, looks virtually seamless. The double glazed unit (DGU) is fixed without any clips or visible hinges, giving a highly distinctive, sleek and minimalist look,’ she adds. The physical difference from the steel Neo is palpable, and has not been lost on the likes of architect Simon Conder, who specified them on a project of his in Cornwall.

The firm admits that having to source the high quality resin from Germany means the slicker details and better performance come at a heftier price – there’s a £200 difference from its standard CR9 model, and sales of the Neo are outstripping the Fortecom by up to 20 times. But the company hopes that with sustainability guidance getting ever more stringent, increased demand might push up production volume, which would in turn drive down unit cost. If that’s the case, then perhaps a rooflight that’s now the choice of the few might ultimately allow everyone to experience the sky with a James Turrell-like clarity.

Rooflight Company’s Neo rooflight is a development of the firm’s original Conservation rooflight, and its double glazed units yield a similar U-value of 1.2W/m2K, with 80% light transmittance. It is also one of the first rooflights to receive Secured by Design accreditation. Calling the product a rooflight however, possibly limits its applications – when Neo was specified on Zaha Hadid’s Maggie’s Centre in Kircaldy, Fife, it was installed not on the roof but on the walls – its bespoke flashing component robust enough to allow for easy integration into either horizontal or vertical surfaces. And now the Neo range can be integrated into a photovoltaic strategy. In conjunction with Simon Monnery Architects, the firm developed the 1.7m  by 1m Neo Solar, that matches the PV module exactly, to meld it seamlessly into a roof mounted array. Aware of the demand for increased performance, the firm can put coatings on its DGUs which results in minimal reductions in light transmittance and achieves a U-value of 0.8W/m2K.

The Rooflight Company constructs its  own double-glazed units using single panes of St Gobain glass. The panes, which have been cut to size, are passed through a glass cleaner before being run across a vertical light box. The glass is then visually inspected to Glazing Federation guidelines from a distance of 3m to check for possible imperfections. Face 2, which is the internal face of the outer pane, is usually where any applications, such as low-e coatings, are placed. The unit will be made of two panes separated with a aluminium spacer bar and filled with 90% argon.

The spacer, which runs on all four edges of the glass, is filled with 50% desiccant and adhered to both panes with a coating of butyl applied via dual pump nozzles, running on both sides. This will act as the primary seal for the DGU. The newly conjoined panes are then run under an automated press that applies light pressure to the unit. If any water remains within the pane at this point, it is considered a ‘wet out’, and the pane must be removed from the production line. The outer pane is slightly longer than the inner – a detail that allows the roof flashing to run under it once installed, giving a neater interface.

One of the space strips contains a small hole into which a dual flow co-axial nozzle can be inserted. One pumps argon gas into the cavity while the outer extracts the air. Argon filling has to meet guidelines set out in BSEN1279. The nozzle is fitted with a sensor set to switch off at 92% density. The nozzle is then removed and the hole sealed with a plastic bung. As part of the quality control, every day a panel from the previous day’s production is randomly and tested with an argon monitor to ensure there has been no loss of gas through the primary seal.

The final seal of the panel is provided by the ‘hot melt’; namely Bostik 5125, a black butyl edge sealant heated to 190°C and applied to the edges of the DGU with a gun applicator. Care is needed to ensure the glazed panel does not burst as Argon doesn’t react well to heat. The windows are then set in the frames with a secondary seal. The Conservation rooflight uses a neutral cure silicone, which is ‘dragged off’ manually; then it sits  in a curing room for 3-5 days to go off. The Neo has a mechanically applied silicon seal, its edges defined by glazing tape. Clips in the steel casement keep the glass in the frame the unlikely event of failure. 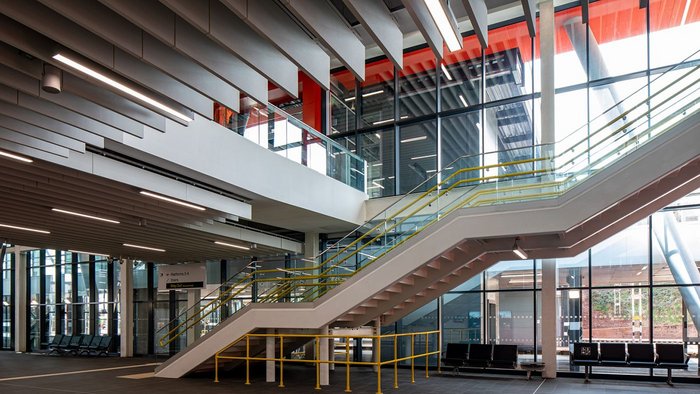